Remember a few posts ago, when I talked about the Pie and Pie party that I had at my friend Rita and Damon’s place? Well, technically the party should have been called Pies and Pies because both AJ and I made more than one pie. In fact, AJ made six (or was it seven?) pizzas for the group, while I made four sweet dessert pies. One of them, this Southern Comfort Pear Almond Frangipane Pie was ridiculously good. 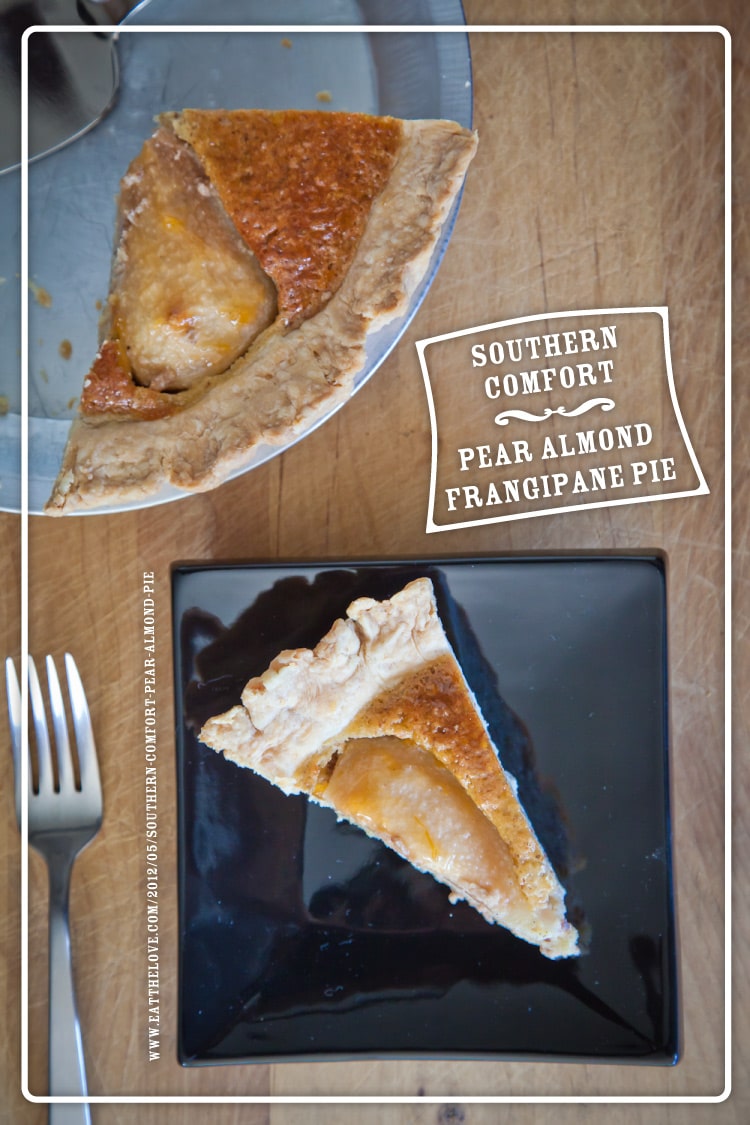 Maybe it’s the Southern Comfort or maybe it’s just that I love pears but this pie pretty much had it all for me, both in looks and taste. I wasn’t the only one, as my friend Rita kept on telling me that the pie looked so much better in real life than the one in the photograph that I adapted the recipe from. I would disagree, as the book, Classic Artisan Baking by Julian Day is pretty gorgeous. Truth be told, my pie had a more rustic homestyle feel, while the recipe that I pulled it from, a tart, was definitely something a little more upscale beautiful, well as upscale beautiful as an English rustic countryside version of a fruit tart can look. Of course, no one at the party really compared it to the book version, and, as usual, I gave it my own little American twist, adding the Southern Comfort, which I found buried in the back of Rita and Damon’s cabinet. 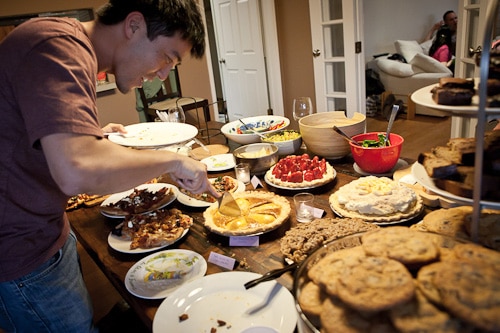 I’m actually a bit in love with the Classic Artisan Baking book. The photography from Steve Painter is homey and approachable, not overly styled and definitely exceedingly British countryside in feel. As I peruse the book, while in LA, I feel like I should be taking some tea and digestive cookies out to the garden, to watch the dogs scamper about with each other. Instead I frantically tried to make four pies and help AJ bake six (or seven) pizzas before all our guests arrived. 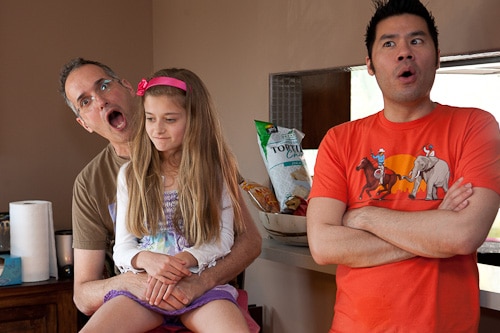 Lee and I seem astonished at something, but Gavi is utterly unperturbed. (photo by Rita Huang)

The guests were, of course, grateful and gracious as we pulled pizza and pie out of the oven, one at a time. Most everyone reached for a slice of one of the pies for desserts (some, more than one slice of each pie) even though they were all stuffed from AJ’s pizzas. Even still, Rita and Damon had plenty of leftovers to last them through the week when we were long gone. Somehow, I don’t think they were complaining. 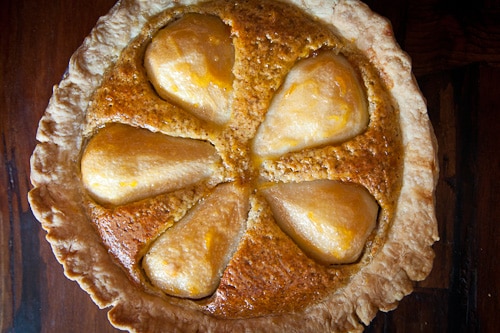 Special thanks goes to Ryland Peters & Small for providing me a review copy of Classic Artisan Baking by Julian Day. Though the book was provided by them, I was not compensated for anything I wrote above and all opinions are my own.

By Irvin Lin
Though adapted from a British cookbook, this pie is purely American, with the addition of Southern Comfort whiskey, a fruit and spice infused whiskey popular in the South. I personally love the earthy flavor it lends to the pears and almonds in the pie, as well as the warmth of the spices and alcohol. A slice of this open faced pie makes me feel nostalgic for those times where I would rock back and rorth on a porch swing, on my wrap-around porch on a muggy night looking out past my white picket fence. Except, you know, I grew up in the suburbs of St. Louis and did everything I could to avoid going outside after dark in the summertime for fear of being eaten alive by mosquitoes. 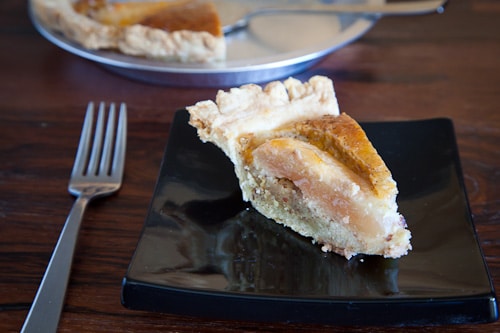 1. Make the crust dough by placing the flour and salt in a large mixing bowl. Cut up the butter into 1/2 inch chunks, sprinkle over flour and toss to coat. Flatten the cubes of butter with your fingers until all the butter has been smashed. Then start rubbing and squeezing the flour and butter together with your fingers, until the ingredients start to clump together. Sprinkle the water and Southern Comfrot over the mixture and toss with a fork until it forms a dough. If the dough seems too wet, sprinkle a little more flour onto it and fold it in, but the dough is meant to be a bit wet. Gather the dough and flatten it into a large 1/2” thick disk. Wrap tightly with plastic wrap. Place in the refrigerator for an hour or overnight.

2. Once the dough has chilled, preheat the oven to 325˚F (170˚C, Gas 3). Roll out the chilled dough on a generously floured surface. The nice thing about this dough is that you can use as much flour as you need, as it is pretty forgiving.  Roll it out to 10 inches and then fit it into a 9 inch pie pan. Decorative flute the edges of the crust.

3. Place the butter and sugar in the bowl of a stand mixer, fitted with a paddle attachment. Cream the together on medium speed until light and fluffy, about a minute (depending on how cool your butter is). Add the eggs, one at at time, beating on medium until incorporated and scraping down the sides of the bowl between additions. Add the Southern Comfort and vanilla extract. Split the vanilla bean down the middle lengthwise and scrape the seeds out into the bowl, then add the Southern Comfort and vanilla extract. Beat until incorporated.

4. Add the almond flour to the batter and fold it in by hand with a large spatula, making sure to scrape the bottom and sides of the bowl until the batter is uniform in texture and color. Scrape it into the crust. Peel the pears and split each pear in half lengthwise. Using a spoon, dig out the center of each pear, removing the seeds in the center. Arrange the pears halves, cut side down, in the pie batter. You may not be able to fit all six pear halves but do the best you can (I could only fit five, and ended up just eating the sixth half out of hand). Bake in the oven for an hour or until the frangipane bounces back to the gentle touch of the finger. Cool on a wire rack.

5. Once the pie has cooled, melt the apricot jam in a small bowl using the microwave or small pan on the stove. Once melted, stir in the Southern Comfort and brush the glaze over the entire top of the open pie face. Immediately serve to friends and family.

This blog currently has a partnership with Amazon.com in their affiliate program, which gives me a small percentage of sales if you buy a product through a link on my blog. I only recommend products (usually cookbooks, but sometimes ingredients or equipment) that I use and love, not for any compensation unless otherwise noted in the blog post. If you are uncomfortable with this, feel free to go directly to Amazon.com and search for the book or item of your choice.
262shares