This easy-to-make giant skillet cookie is packed with M&M candies, as well as a sprinkling of crunchy flaky salt to offset the sweetness and give it a touch of sophistication. (Jump directly to the recipe.) 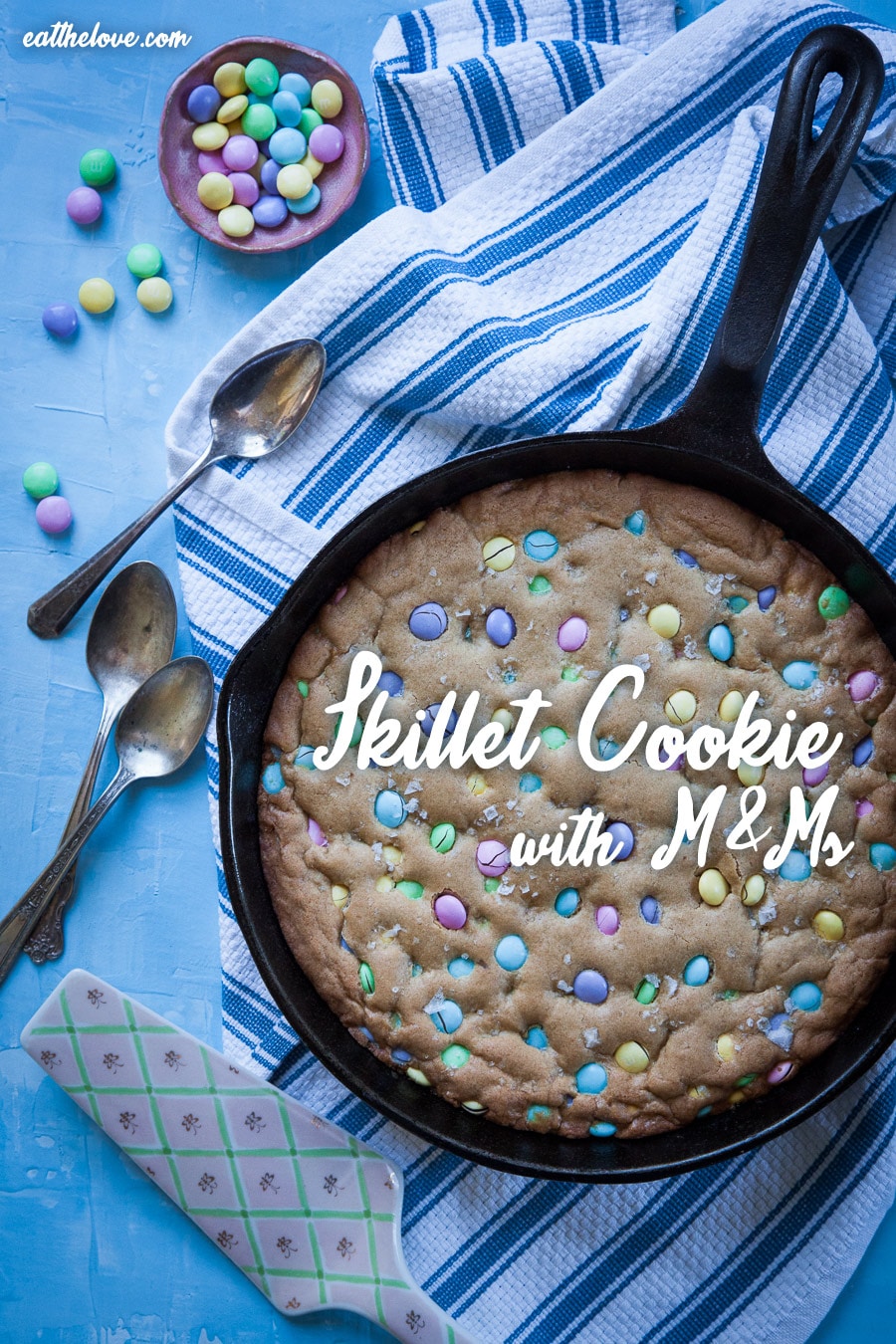 Back in January I posted on Instagram a photo of my cast iron skillet. I love my cast iron skillet but I had a confession that I don’t use it as much as I wish I did. It was buried in the back of my cabinet, with a million pot lids on top of it, behind bowls and plates. It’s a pain to get out and I just often forget I have it. Nearly everyone who commented talked about how much they love their skillet. And their easy solution was just to leave it on their stove top! 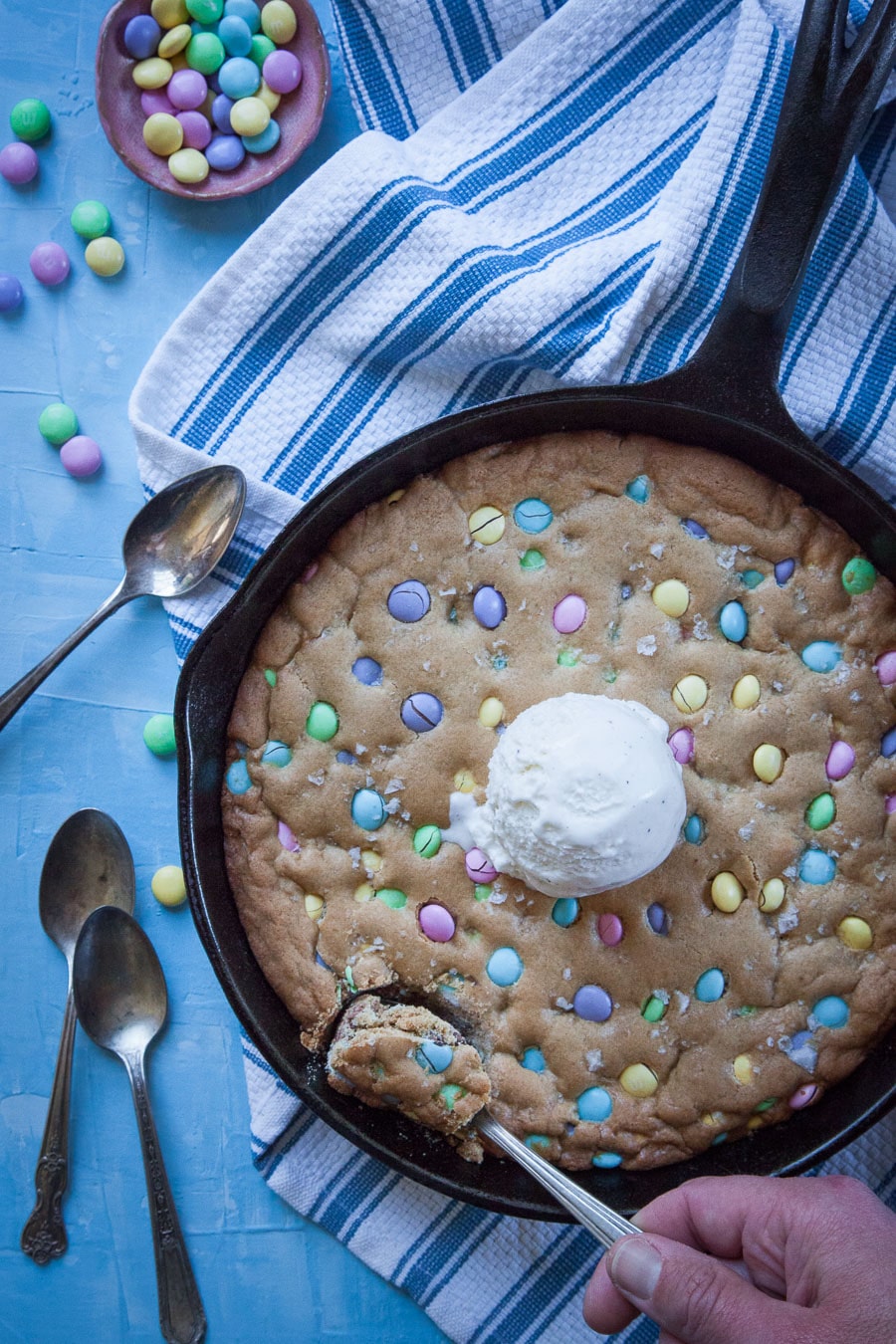 I’m not sure my partner AJ would approve of that. He’s a pretty good sport about all the other stuff that I leave around the house. You should see our current kitchen table, which is crowded with a million bowls and mugs that I brought home from my ceramics class! But I can see him not really wanting a cast iron skillet floating on the stove, one of the few places in the kitchen that doesn’t have something on it already. So I took the skillet out to used, washed it, and told him that I’d put it away the next day. I was able to go a week before he made a comment and I finally put it away. 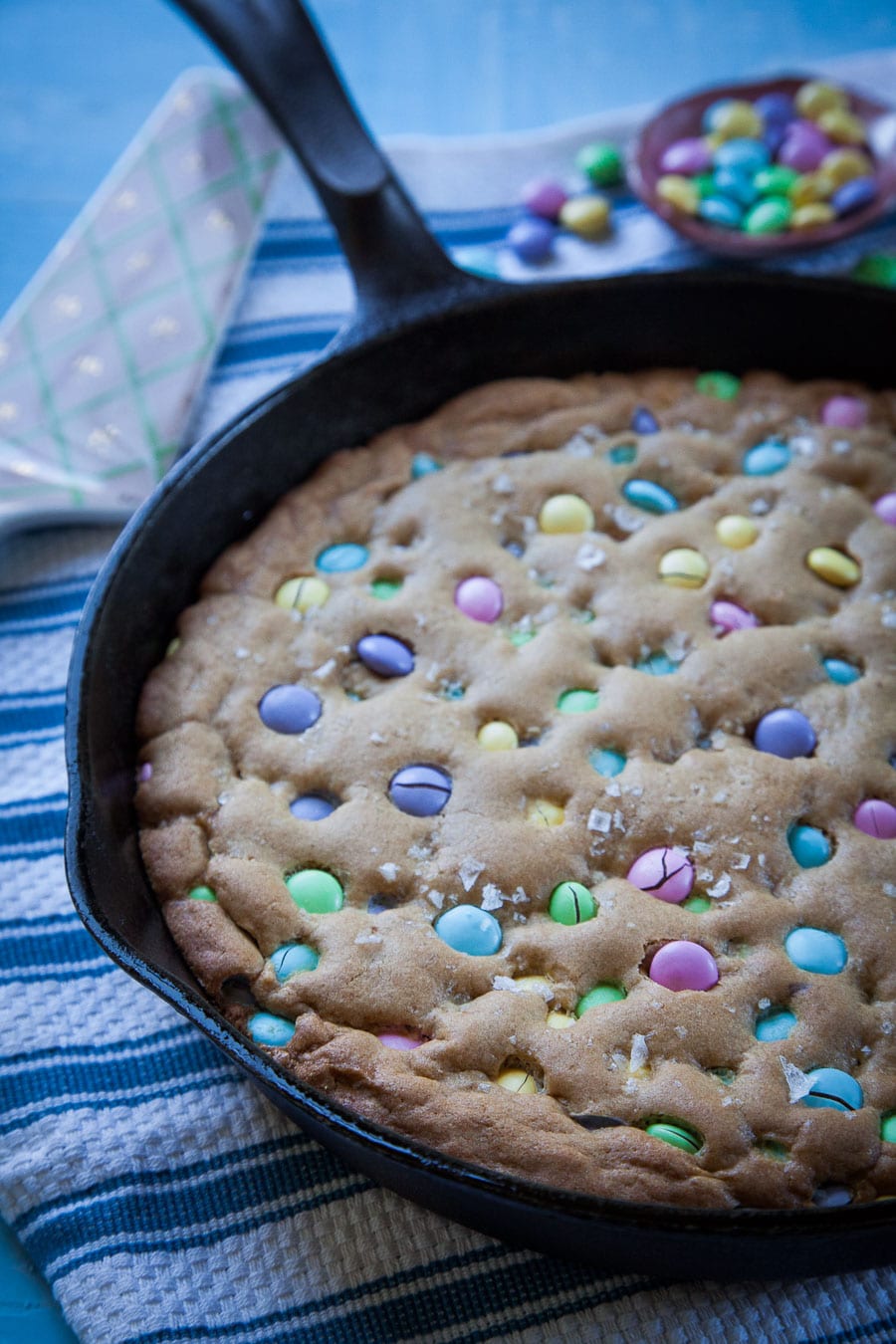 But in that week, I’ve made a number of things with the skillet! We’ve had steak (twice), I’ve made a fruit crisp in it, and I’ve fried up tons of bacon in it! It’s been great to have easy access to it, and even though I know I’ll eventually put it back away in the cabinet, just having it back in the forefront of my head means I’ll be digging it out more often. Or maybe trying to find a better, easy to access, place to store it. Of course, if I keep on making things like these giant Skillet Cookie packed with loads of M&M candies, maybe I won’t ever have to put it away. AJ couldn’t keep his hands away from it. 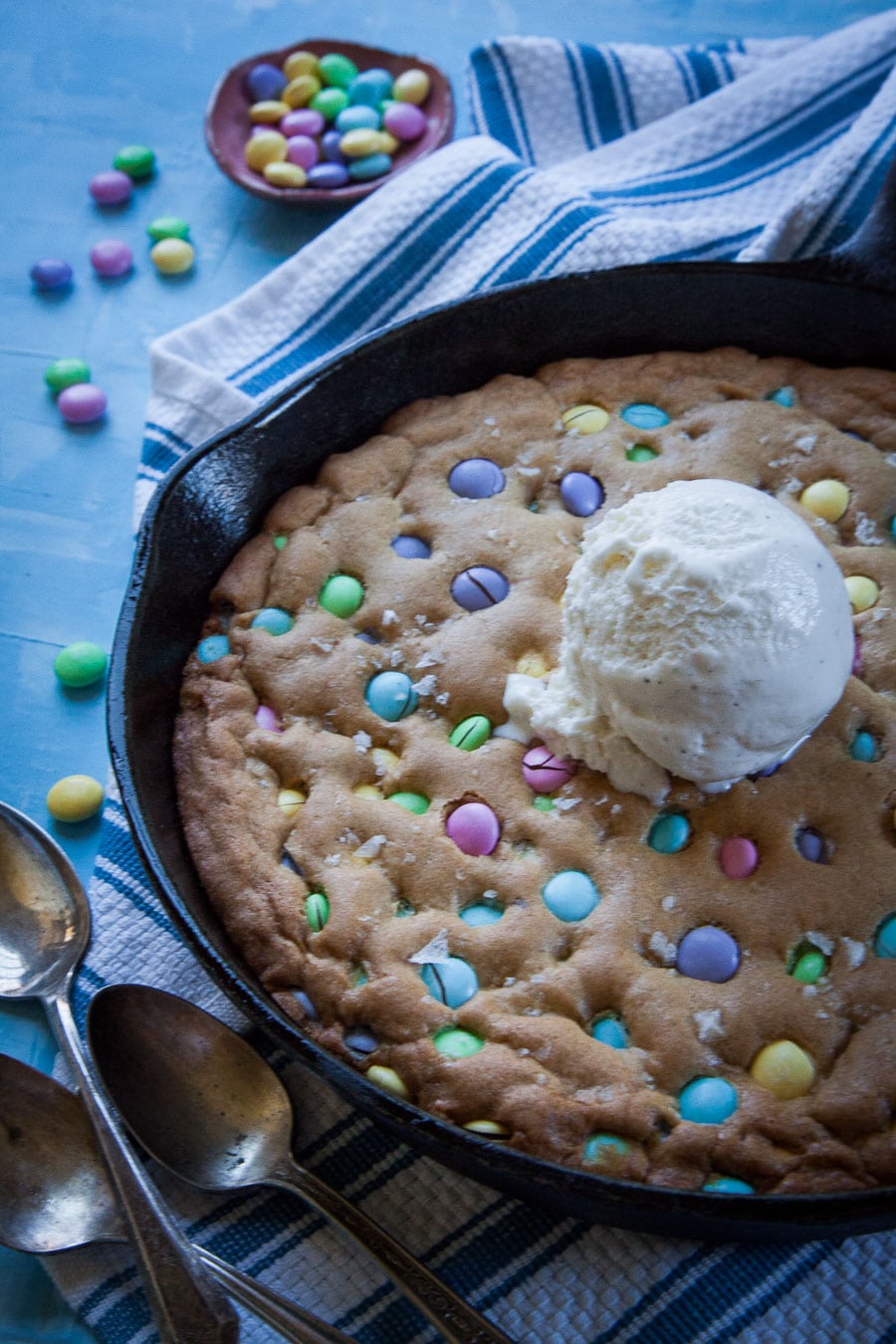 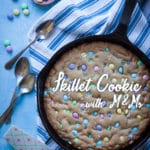 This large cookie is made in a cast iron skillet! You can easily use a regular oven proof skillet of the same size (10-inches in diameter) or a 9 x 9 baking pan instead. But there’s something really satisfying and fun about making and serving the cookie straight from the skillet. Serve it up with a big scoop of ice cream in the middle while it’s still warm if you want! Just keep in mind that cast iron skillets retain their heat for a long time, so take the cookie out just before it seems done, when the edges are only slight brown. As it cools away from the oven, it will continue to bake.
Course Dessert
Cuisine American
Prep Time 15 minutes
Cook Time 25 minutes
Total Time 40 minutes
Servings 10
Calories 300kcal
Author Irvin

This blog currently has a partnership with Amazon.com in their affiliate program, which gives me a small percentage of sales if you buy a product through a link on my blog. I only recommend products (usually cookbooks, but sometimes ingredients or equipment) that I use and love, not for any compensation unless otherwise noted in the blog post. If you are uncomfortable with this, feel free to go directly to Amazon.com and search for the book or item of your choice.
1104shares
This site uses cookies: Find out more.