AJ and I spent most of the first week of our time in Maui on the beach. Specifically a beach nicknamed “Little Beach” – over the rock on the north side of Big Beach. As it’s name implies, it’s a small little beach, removed from the typical family friendly beaches strewn throughout Maui, and that also means it attracts various types of people. The gays (because gay men like to find out-of-the-way, hard-to-reach locations), hippies (same reason, but mostly because they like a place to smoke up) and nudists. Yep, little beach is a clothing optional beach, which meant AJ and I spent an inordinate amount of time sunscreening areas of our body that normally don’t see sun. We hung out with the gays (both nude and clothed) and made friends with our charm, wit, and some baked goods. Like my Rum Soaked Tropical Fruit Oatmeal Cookies. 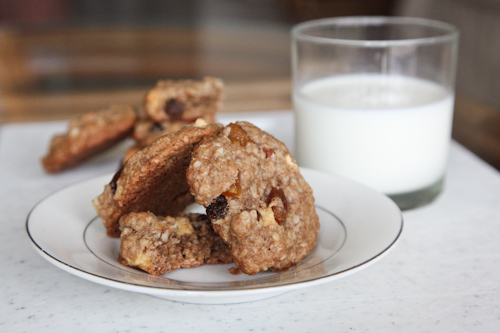 I swore to our new beach friends that the cookies were just plain cookies not doctored with any mind-altering substance (well, other than the rum). But a few people there didn’t seem to trust us. I don’t blame them, as there were a number of people walking around the beach offering “ganja cookies” and “pot brownies” along with various ziplock bags of green herbs that AJ and I did not inquire about, as we had no interest in them. However, if you find yourself on Little Beach, do note that the woman offering the “ganja cookies” also sells a t-shirt that says “I got Baked on Little Beach” which makes for a lovely souvenir. Also note, the “ganja cookies” are both gluten free and vegan. So there you go. Mind altering cookies suitable for whatever your dietary restriction happens to be. 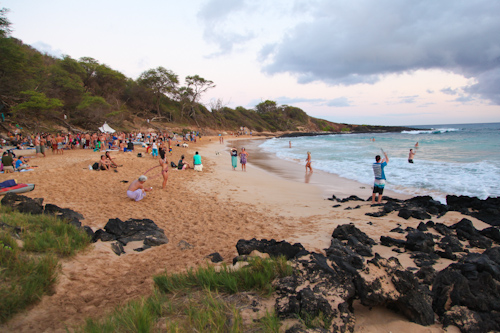 Little beach, despite being off the beaten path, is quite popular, especially on Sundays. Loud and riotous, there’s a fire dancing, people doing extreme yoga, and a large and loud drum circle that happens as sunset approaches. I am not a fan of drum circles, but I wondered to AJ if I would appreciate them more if I had a gluten free vegan ganja cookie. Sadly, I never did find out if this was true. 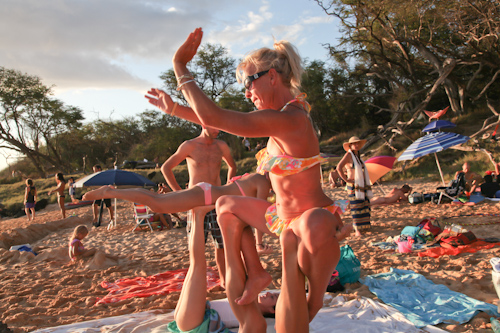 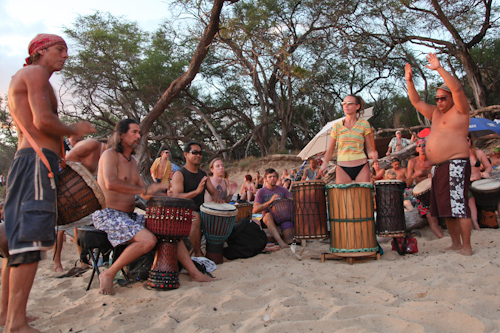 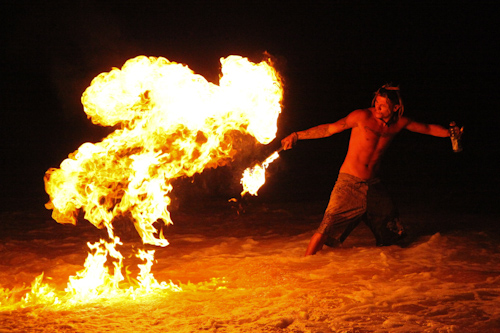 Playing with Fire on Little Beach

Most of the gays seem to congregate at the end of the north end of Little Beach and it was interesting to go to the beach day after day and see the people who come and go, on vacation. AJ and I were on vacation as well, but since we were on the island for over a month, we definitely saw a number of people come and go, there for a week or for a long weekend (we never thought people would fly to Hawaii for a long weekend but apparently people do). We befriended people, only to have them leave and start afresh with new vacationers. In the end, we realized if we actually lived on the island, it would difficult to become friends with vacationers, constantly getting to know people and watching them leave. But it didn’t stop us from meeting some great people, enjoying the sand, surf and ocean, and playing a few rounds of Uno with them. 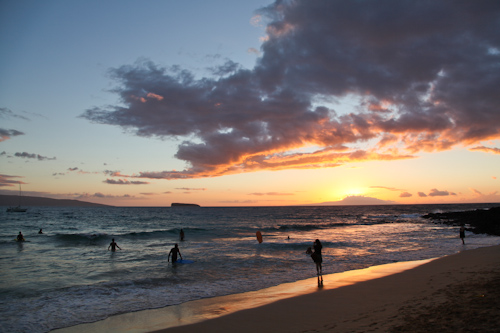 Post-sunset at Little Beach is when all the fun starts

AJ and I found that offering my baked goods broke the ice between us and the locals, even if my baked goods didn’t have any “special herbs” in them. I had originally made these Rum Soaked Tropical Fruit Oatmeal Cookies for the 4th of July party that AJ and I went to (along with my mango strawberry bars) and the ones that I brought to the party were immediately snatched up. I had put aside a few at home, to photograph for the blog, and then we brought those to the beach as well. Everyone seemed to enjoy them immensely, though I wonder how much that had to do with them liking them as they were, and them having eaten a ganja cookie and wanting something to munch on.

I won’t question it. Just make these yourself and you’ll see how addictive they are. Definitely something to share with new found friends (or enjoy them all on your own). 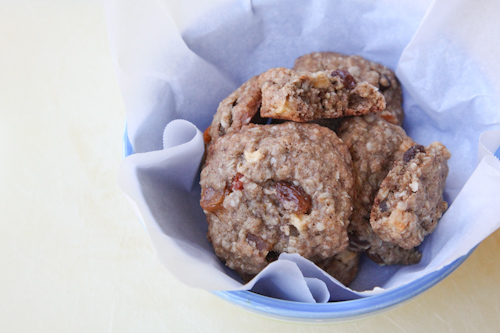 A tropical twist on the old-fashioned oatmeal raisin cookie, the longer you soak the fruit in the rum, the more kick they give it. I let them soak for about an hour, but if I were to do it again, I’d probably let them soak overnight. I know my new friends would probably appreciate that as much as I would. 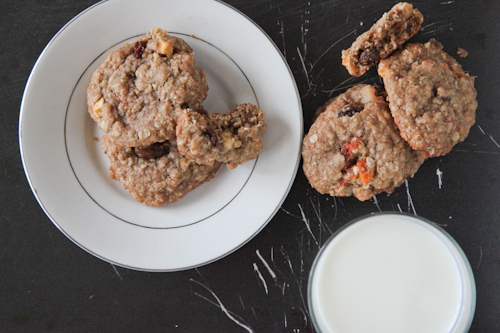 1. Place the dried tropical fruit and rum in a small bowl. Toss to coat and set aside to soak for at least an hour, or up to 24 hours (the longer you soak it, the more rum will absorb).

2. Once the fruit is ready, preheat the oven to 350˚F. Line a baking sheet with a piece of parchment paper or silpat.

3. Place the oats, flours, cinnamon, and baking soda in a medium mixing bowl. Using a balloon whisk, vigorously stir the dry ingredients until they are well blended and uniform in color.

4. In another large mixing bowl, beat the coconut oil and sugars together with a hand mixer, or standing mixer. Add the eggs, one at a time, beating to incorporate each one separately. Then split the vanilla bean lengthwise and scrape the seeds into the sugar mixture. Beat to distribute.

5. Add the dry ingredients and with a wooden spoon, mix the batter to incorporate in. Drain the dried fruit (reserve the rum for another use – I suggest a Mai-Tai) and add to the cookie batter. Mix again to distribute.

6. Drop heaping tablespoons of the cookie batter on the lined baking sheet about 2 inches apart. Bake for 10 to 12 minutes or until the cookies look golden brown. Remove from the oven and let them rest on the baking sheet for 5 minutes before moving them to a cooling rack to cool further to room temperature.

This blog currently has a partnership with Amazon.com in their affiliate program, which gives me a small percentage of sales if you buy a product through a link on my blog. I only recommend products (usually cookbooks, but sometimes ingredients or equipment) that I use and love, not for any compensation unless otherwise noted in the blog post. If you are uncomfortable with this, feel free to go directly to Amazon.com and search for the book or item of your choice.
127shares