It was the sort of invite that I couldn’t ignore. “Come over for dinner and we’ll dine on treats inspired by St. Louis and the Midwest!” AJ and I discussed the invitation for a brief three milliseconds before we texted back to our friend Peter and Grant in the affirmative. Peter and I had met in St. Louis at college, and the idea of revisiting our college days via food sounded awesome. The only thing was, I had volunteered to make a dessert for the evening and I wasn’t sure what to make. My initial thought was a gooey butter cake, but it’s more of a lunch coffee cake thing than an after dinner treat. Then I thought of frozen custard, but my friend Hadley was going to be there, and he happens to be terribly lactose intolerant. In the end, I went with a classic Midwest treat, reworked to make it a touch bit fancier. Fast and simple was the key because the original dessert that I had promised to bring didn’t happen. Instead I went with a Rocky Road Rice Krispie Treat. 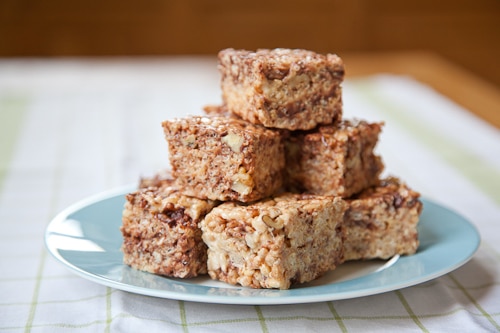 Now I’ve made Rice Krispie Treats before for this blog, about this time last year in fact for Valentine’s Day. That one was definitely a little bit fancier. But this time I didn’t have time to make the marshmallows from scratch. In fact, I had about an hour before the party started to make my dessert treat. This was because the original dessert I wanted to make, a Tunnel of Fudge bundt cake, just didn’t happen. In the immortal words of Katy Perry, it was an epic fail. The first time I unmolded the cake, the cake center oozed out, having not baked long enough. I quickly scooped it up and put it back in the bundt pan and baked it longer. It overbaked, without any tunnel or fudge at all. I was screwed with no time to make another one. 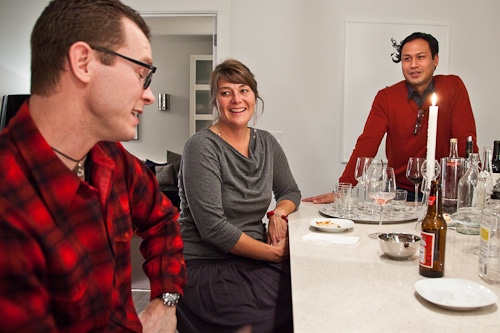 Friends Ben, Tina and Hadley all chatting away and exchanging stories as we munched away.

So I took a hard look at my pantry to see if anything jumped out and screamed Midwest to me. Then I spied the bags of marshmallows and the box of Rice Krispies and a classic Midwest treat was reborn. Of course, being the typical food blogger, I had to fancify it a bit – throwing in some chocolate chips and some chopped California walnuts as well as prebake the Rice Krispies cereal with some butter, sugar and milk powder to give them a salty caramelized flavor. They weren’t the prettiest looking Rice Krispie Treats, but they definitely were one of the tastiest according my friends. 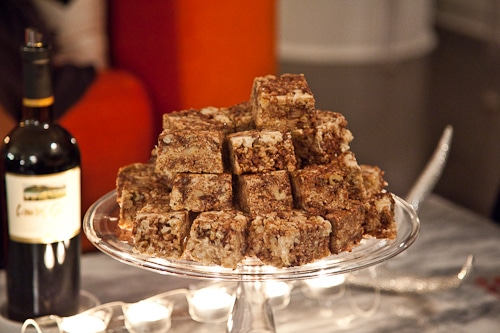 Of course, my gracious hosts had a fancy glass pedestal plate to put them on.

The dinner party was fantastic, as expected. Appetizers included tortilla chips with vegetarian Sloppy Joe dip (I believe it might have been Manwich seasoning), Crab Ragoons (which were a definite step up from any crab ragoon I had in St. Louis – as it was made with minimal cream cheese and real crab meat) served without the scary neon pink sweet and sour sauce, and the St. Louis specialty, Toasted Ravioli. If you have never had Toasted Ravioli, it’s breaded, deep fried ravioli with marina dipping sauce and is a St. Louis tradition. I personally love it, but Peter’s version was baked instead of fried and was coated with an ingenious blend of panko crumbs, fried onions and ritz crackers. Ritz crackers! It was a midwest themed party…he was keeping it real. 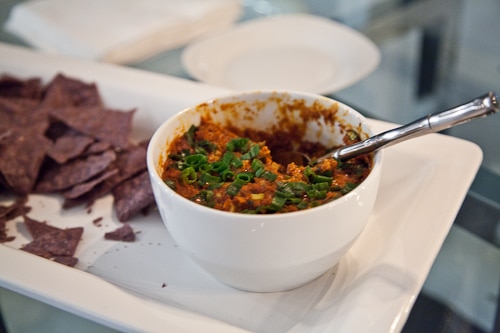 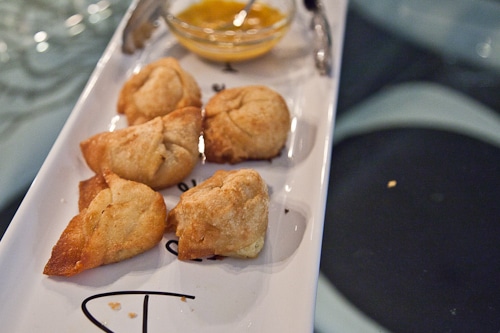 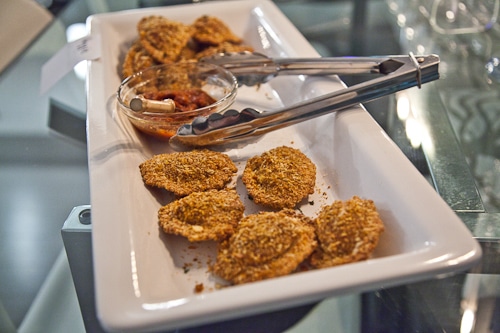 Grant made both St. Louis style pizza (the crust is cracker thin – Cook’s Country had recently done an episode about St. Louis food) as well as Chicago style deep dish pizza. They even went beyond the call of duty and made Pasta House salad. Pasta House is an ersatz Olive Garden chain in St. Louis, that offered an unlimited salad and breadstick option, which (being poor college students at the time) we almost always got. Of course, Peter and Grant’s Pasta House version is way better than I remembered in St. Louis. I think it’s because the salad wasn’t sitting around in the dressing for hours beforehand. 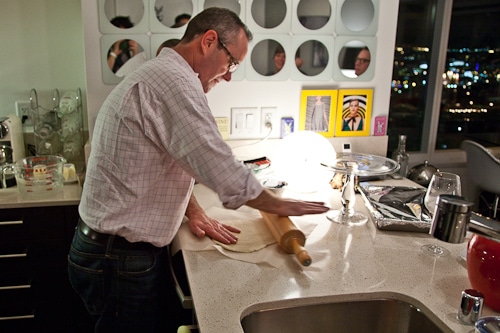 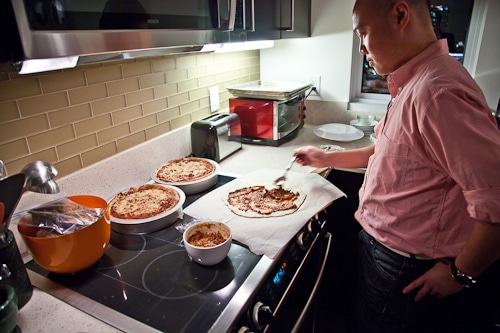 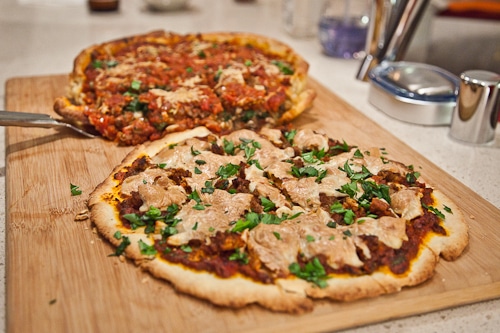 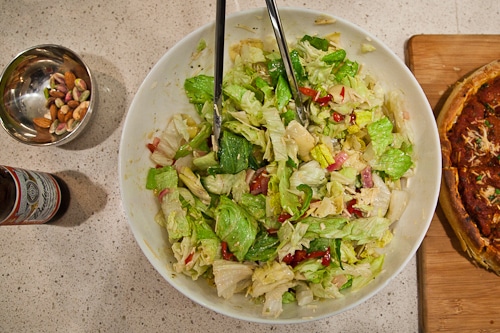 Of course the evening was filled with stories about how I was fired from my first temp job in San Francisco (remind me to tell you that sometime), motorcycle accidents, taking PE classes in walking, and trying to find a good dry cleaner in St. Louis (hint, don’t go to Tip Top Cleaners there). That said, it was nice to kick back, enjoy an evening with friends, and eat the food from where I grew up. Well, except it was a little better than the memory of what I used to eat. Which is just as it should be, as the present should always trump the past. Thanks Peter and Grant for a walk down memory lane. 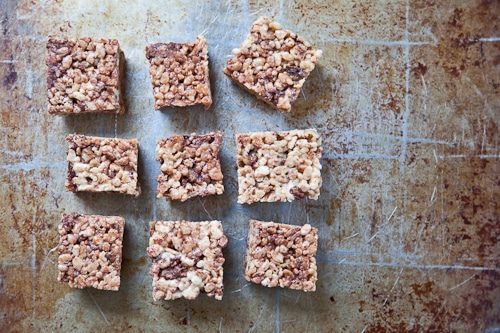 Rocky Road Rice Krispie Treats
By Irvin LinThough not the prettiest treats in the world, the flavor of these classic Midwest snacks are definitely a step above the average bake sale sweets. Taking inspiration from Momofuku Milk Bar, I toasted the rice crispy cereal in the oven with a mixture of sugar, salt, milk powder and lots of butter. This will not only make the rice crispy bits extra crisp, but add an extra dimension of caramelized crunch and underlying saltiness. Then I took inspiration from Flour and use brown butter along with a vanilla bean to add another level of dimension. The additions of walnuts and melty chocolate in the treat takes them to the next level. Be forewarned with this recipe that it uses a LOT of butter and is not for the faint of heart.Milk powder can usually be found in the coffee and tea section or the baking section of the grocery store. That said, I prefer whole milk powder (not the nonfat milk powder you can get at the normal grocery store) but it’s super hard to find. Nonfat powdered milk is a totally decent substitute, just make sure it’s ground to a fine powder (the boxed type can sometimes be a little chunky, just stick it in a ziplock bag and roll a rolling pin over it). 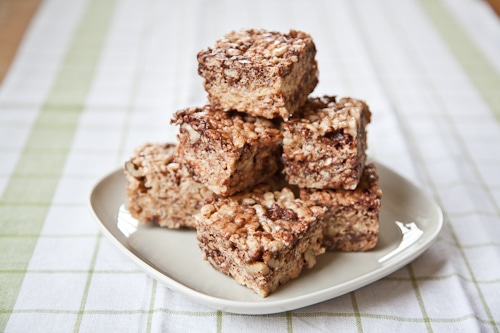 1. Preheat an oven to 275˚F and line two baking sheets with silpats or parchment paper.

2. In a large (and I mean large) bowl, place the Rice Krispie cereal, milk powder, granulated sugar, and 2 teaspoons of salt. Melt half the butter (225 g or 2 sticks) in the microwave or on the stove. Drizzle the melted butter over the dry ingredients, all the while tossing them to coat with a large spatula. Keep tossing until all the butter has been drizzled over the rice krispie cereal and the sugar, milk powder and salt have dissolved.

3. Spread the rice krispie cereal over the two baking sheets as evenly as possible. Bake in the oven for 30 minutes, stirring and rotating the sheets halfway through until the cereal starts to crisp up and look toasty.

4. Take the cereal out of the oven and let cool on the baking sheets. Spray a 9 x 13 inch baking pan generously with cooking oil and set aside.

5. Place the remaining 225 g (2 sticks) of butter in a large pot (preferably one with a silver bottom, not a black nonstick bottom). Turn the heat on medium high. Split the vanilla bean lengthwise and scrape the seeds out of the pod and into the pot with the melting butter. Add the remaining 1/2 teaspoon of sea salt. Stir with a wooden spoon or heatproof spatula until the butter starts to brown and smell nutty. Turn the heat down to medium and immediately add the marshmallows to stop the butter from burning and to melt the marshmallows

6. Continue to heat the marshmallows until they are completely melted, stirring all the while to incorporate the butter. Once the marshmallows are melted, turn the heat off and add the toasted rice crispy cereal. Stir quickly to coat. Once the cereal is mostly coated, add the chocolate chips and walnuts, stirring to evenly distribute. The heat should melt the chocolate mostly but don’t stir too much as you want the chocolate to be swirled into the cereal and not completely incorporated. If there are still some chunks left, that’s ok.

7. Pour the marshmallow coated cereal into the coated 9 x 13 inch baking pan. Take a piece of wax paper and press down on the cereal to evenly distribute throughout the pan. Let it cool to room temperature and then turn out on a cutting board (you may need to help it out of the pan by using a butter knife on the side of the Rice Krispie treat to wedge it out). Cut into squares and serve.