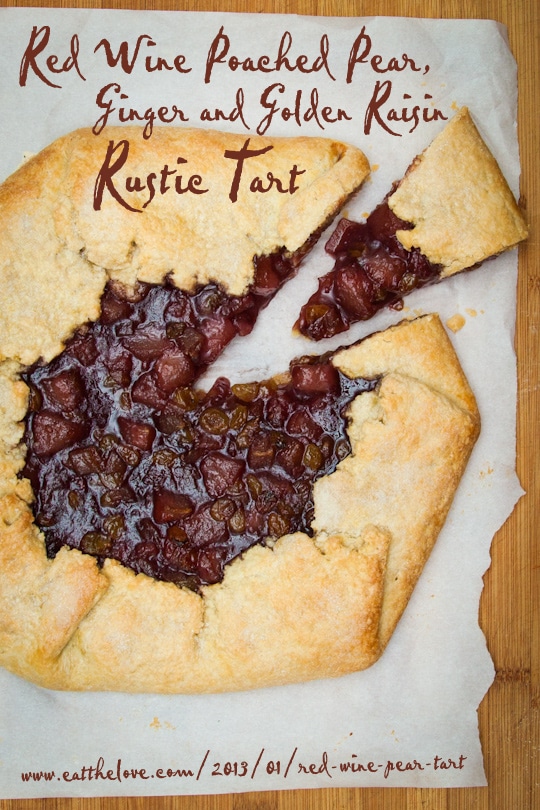 “Now how come you didn’t feature photos of us on your blog last time you were here visiting Indiana?” asked AJ’s sister-in-law while we cut into the Red Wine Poached Pear, Ginger and Golden Raisin Rustic Tart that I had just made for all of us. This happens every now and then, when people find out that I blog. It’s either, “why didn’t you include me?” or “Oh I can’t believe you included that photo of me on your blog!” which, if you think about it, is really a lose-lose situation for me. Even though this blog is a “food blog” its really also a journal of my life with about 85% of the things I bake for real life events and share on here are for friends or loved ones and not just baking specifically for this blog (though, you know it does happen). Dinners, gatherings, parties and potlucks, any chance I have, I bake for them (hint, I’m a really good person to invite to your party – I’ll bring dessert!). 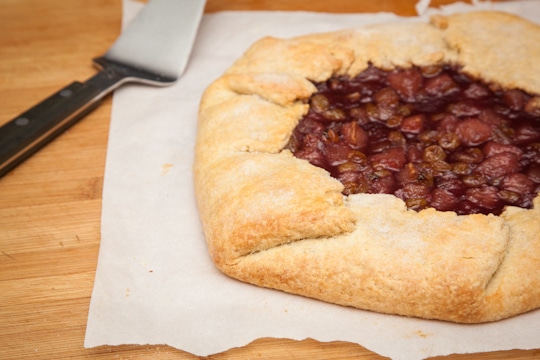 Of course that also means that people occasional show up (or don’t show up AJ’s sister-in-law observed) on this blog. I had featured an apple caramel cookie that I had made for them last year, but somehow our hosts didn’t end on the post. Just as well, as the lighting in their place was less than ideal. This time round I busted out the speedlight flash to take photos, but sadly every time I tried to take a photo of said sister-in-law, she would put her hands up, telling me she didn’t want a photo of her. Well you can’t have it both ways now can you? Complaining to me that you want to be on the blog, but not letting me take a photo of you doesn’t quite work. 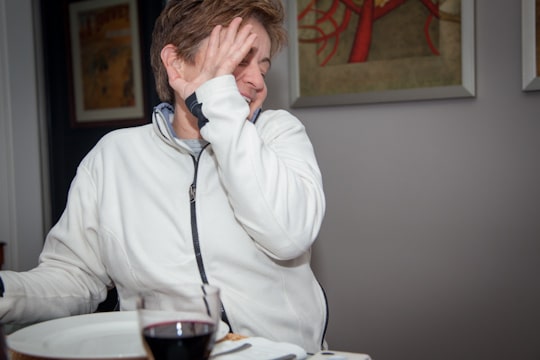 Nevertheless the dinner we had with AJ’s brother, sister-in-law and niece was awesome. They have a fabulous kitchen (I love making food in a well stocked kitchen) complete with a pro-range stove and oven. Someone remind me to get a pro-range stovetop and oven. Oh wait, remind me to get a real kitchen and actual home that allows for that first. AJ made his signature pizza for dinner while I made the above tart after being inspired by a recipe from one of the numerous cookbooks that I got for Christmas. Much to AJ’s chagrin, I keep on asking for cookbooks for the holidays and AJ’s family is very much thrilled to give them to me. I think I came back from the Midwest with an additional seven books (granted, I bought three of them while I was there), and lord knows where I am going to put them once we take down out Christmas tree (yes it’s still up, with my books underneath them. Don’t look at me like that, I know it’s quickly moving into fire hazard territory). 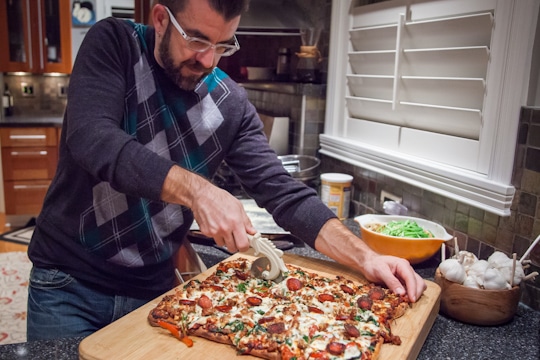 The original tart that was featured in This is a Cookbook by Max Sussman and Eli Sussman is a rustic free form tart that just use pears and candied ginger but AJ’s brother happens to also be part owner of a wine store. So I knew that there would be excellent wine floating around their house. Wine-poached pears is a classic dessert, simple to make, elegant to serve. I thought I’d marry the idea of a poaching the pears in a mulled spiced wine and then turning it into a tart. 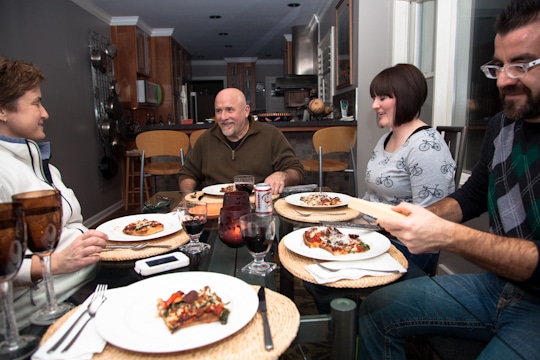 Turns out that my instincts aren’t too far off. The dessert itself looked great all by itself and tasted just slightly holiday with the ginger and cinnamon that I added to the mix. But not enough that you couldn’t serve it any other time in the winter that wasn’t December. AJ’s niece actually stuck around for dessert, even though she was needed elsewhere, to help make appetizers for her New Year’s eve party that she was hosting the next day. She wolfed down the tart, then ran off to help her co-hosts. I hope it went well for her. Afterwards, AJ and I chatted with his brother and wife, drank more wine, ate more tart and talked about his loving but slightly dysfunctional family. You know, all the usual…

Cutting and poaching pear chunks in the red wine before baking the tart is a nod to the poached pear dessert that seemed to be everywhere in the 90s. Though the poached pear meal ender isn’t quite as common as it used to be for dinner parties, adding spices to the wine (a cinnamon stick, some candied ginger) gives the wine a nice holiday mulled flavor and adding a free form crust elevates the poached pear to an elegant yet casual dessert that can be thrown together with common household ingredients. One thing to note, the tart dough needs to chill for a minimum of 2 hours ahead of time (or overnight if that’s more convenient), so take that into account as you plan ahead.

Freely adapted from This is a Cookbook, Recipes for Real Life by Max Sussman and Eli Sussman 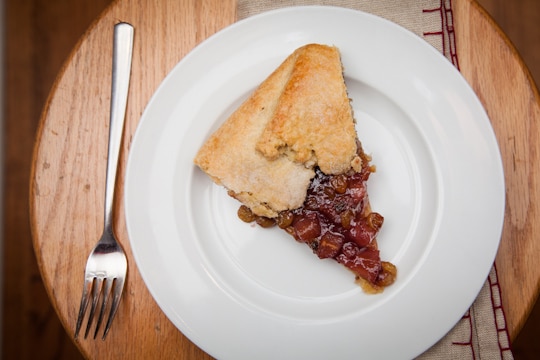 Directions
1. Make the tart dough by placing the flour, sugar and salt in a medium mixing bowl. Cut the salted butter into 1/2 inch cubes and sprinkle over the dry ingredients. Toss the butter cubes with your hands to coat, then squeeze the cubes of butter until they flatten out. Continue doing this until the rest of the butter has been reduced to smaller bits and flakes, squeezing and tossing the dry ingredients until the dough starts to resemble crumbly cornmeal with bits of butter still in flattened chunks. Add the egg yolks and sprinkle the water over the ingredients and, using a large spatula, fold the wet ingredients into the dry. As the dry ingredients become more moist, work the ingredients together with your hands, until it comes together and forms a dough. If the dough seems too sticky soft, sprinkle a little flour into it. If the dough seems to dry, add a little more water. Once formed, gather into a ball, flatten into a disk and wrap with plastic wrap. Refrigerate until chilled at least 2 hours or overnight.

2. Make the filling by peeling, coring and chopping the pears into 1/2 inch chunks. Place pear chunks, raisins and ginger in a medium sized pot, along with 3/4 cup red wine (reserving the 2 tablespoons for later), both sugars, honey, cinnamon sticks and vanilla extract. Bring to boil and then reduce heat to a simmer, stirring frequently and reducing the liquid until it starts to look syrupy (about 10 minutes). Using a slotted spoon, scoop out the pears, raisins and ginger into a heatproof bowl, reserving the liquid in the pot. Mix the flour and the reserved two tablespoons of wine together in a small bowl until the flour has dissolved. Add to the wine syrup and cook for another two minutes over medium heat, until the syrup had thickened and is no longer cloudy. Remove from heat, add back the pears, raisins and ginger and allow to cool to room temperature.

3. Once the dough has chilled, preheat the oven to 375˚F and line a baking sheet with a piece of parchment paper or silpat. Roll the dough out to a rough 12-inch circle and place on the parchment paper. Pour the pear filling into the middle of the dough, discarding cinnamon sticks and spread evenly, leaving about a 3-inch border around the filling. Fold the dough over, pleating the dough to make it a nice decorative circle, all the way around, leaving about a 5-6 inch opening in the center of the tart.

4. Beat the egg white and water together until foamy, then brush the top of the pastry (and under the pastry where the pleats are, to help seal them together) with the egg wash. Sprinkle the white sugar over the dough edges. Bake in the oven for 25 -30 minutes or until golden brown at the edges. Let cool at least 10 -15 minutes for the filling to set up before serving.

This blog currently has a partnership with Amazon.com in their affiliate program, which gives me a small percentage of sales if you buy a product through a link on my blog. I only recommend products (usually cookbooks, but sometimes ingredients or equipment) that I use and love, not for any compensation unless otherwise noted in the blog post. If you are uncomfortable with this, feel free to go directly to Amazon.com and search for the book or item of your choice.
449shares