You are here: Home / preserves / Plum Jam Recipe with Lavender

Learning how to make plum jam is easy with this plum jam recipe that uses lavender to give the preserve a gorgeous floral depth. 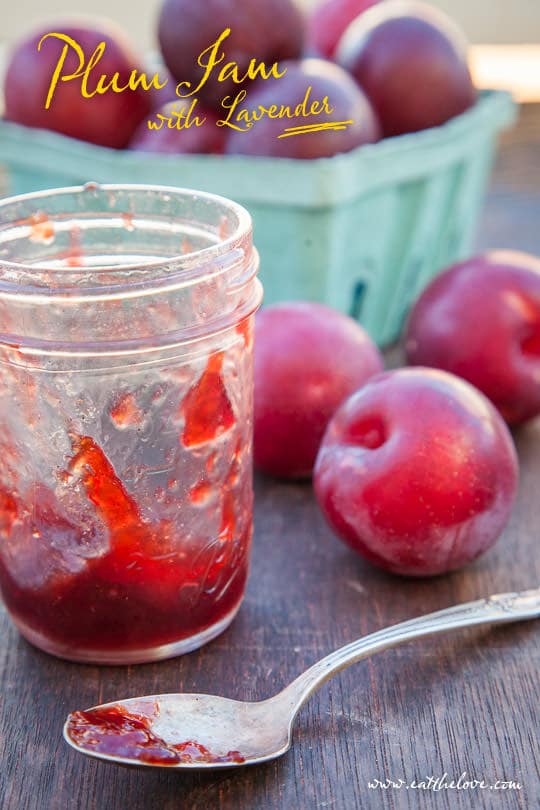 I’ll be honest. I’m not a canning expert. In fact, other than the one experience I had using the oven method (which totally seems safe but apparently a lot of people told me isn’t), I’ve never really done it. But I do make tons of jam when the season hits and usually then frantically eat tons of toast to use it up because I’m too lazy (and slightly scared) to can. Of course this year, for various reasons, I decide to bite the bullet and can my fruit jam so I can enjoy it for the rest of the year. The main reason being my backyard plum tree decided to become insanely prolific this year, like Joyce Carol Oates prolific. This meant I had to learn how to make plum jam, something I’ve done before but never gotten around to canning. Turns out the effort was worth it because now I can enjoy my lavender plum jam for the rest of the year. (Jump directly to the recipe.)

Plums, by the way, happen to make a wonderful jam, something that I never had growing up. Cherry, strawberry, grape and raspberry jams and jellies all appeared in my childhood pantry (well, most my friend’s pantry, we weren’t really a jam sort of family) but plum wasn’t there. If we’re confessing truths, our family was a grocery store jam sort of kind, the ones that always had some forgotten dried out strawberry jam, the cloyingly sweet and neon red type one with the red gingham lid. It was used as often as the dried up brick of brown sugar in the pantry, which means it never really was used at all. 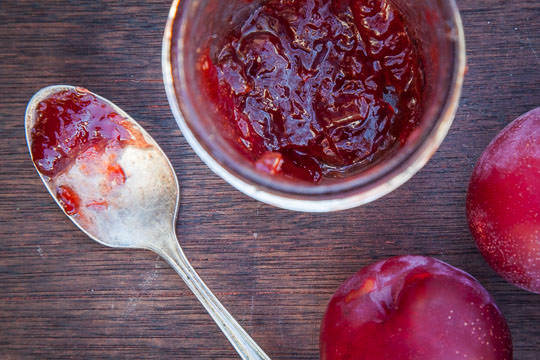 It’s too bad, because if I had known what plum jam tasted like I would have gobbled the stuff up. The plums I used weren’t really jam quality, it’s better to use slightly underripe fruit which has more pectin, or at least a mix of underripe and ripe fruit. But my fruit was so fresh and ripe from the tree that it bursts with juice that dribbles down your arm you bite into it, wonderful to eat but not as much to make jam from. Nevermind, it still made great jam, just slightly less of it, as I had to cook it more to get it to jam thickness. I didn’t mind. The apartment smelled redolent of summertime stone fruit. If I could bottle that scent, I would make a fortune. Instead, I’ll just enjoy this jam year round. I have something like 12 jars of it now.

The hint of lavender is subtle in this jam but it gives a floral dimension that really works with the plum. You might be tempted to put more in, but don’t as you’ll err on the side of making it taste too soapy. Any fresh plum will do, but I’d recommend a red, purple or black plum like Santa Rosa or Friar as they work well with the lavender. The recipe may seem like it uses a lot of sugar, but that’s to offset the tartness of the plum skin. The best thing about this recipe is that plums have a lot of inate pectin in it. Pectin is what makes the jam jell and solidify. Every fruit is different so your results are going to vary in terms of how much you get, but keep in mind the less ripe the fruit, the more pectin and the more jam you’ll get. More ripe (or overripe fruit) and you’ll have to cook the jam down more to reduce it to get it set. 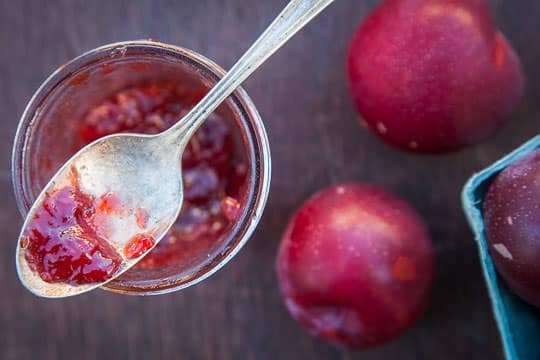 Directions
1. Slice and cut the plums into 1/2-inch chunks over a large bowl, letting the bowl catch the plum chunks and juice. Add the sugar and stir. Cover and let sit for 4 hours or overnight in the fridge.

2. Once the plums have macerated (sat in the sugar) sterilize the jars by first washing the jars, lids and rings in hot soapy water. Place a wire rack in a large stockpot and fill it with hot water from the tap, enough to cover the cans by 2 inches. Place the clean hot jars inside the stock pot on the wire rack. Make sure they aren’t touching, cover and turn the heat up to bring the water to a boil. Once boiling, continue to boil for 10 minutes to sterilize the jars. Place the lids in a small pot filled with hot water and bring to a gentle simmer. Let them sit in simmering water but don’t let it boil. You can cover it to prevent the water from evaporating. Turn the oven on to 200˚F and place a large pan with a wire rack on it inside.

3. Once the jars are sterilized, turn the heat off and use your canning tongs to reach in and grab them. Pour the water back into the stock pot and place the jars on the wire rack in the oven. Do the same thing with the lids. I use a magnetic wand that is designed for this sort of thing but I’m fancy that way. You can just use tongs, just make sure they are rubber or silicon tipped not metal as you don’t want to scratch the lids. Close the oven and let them sit in the oven for 10 minutes or more to dry out.

4. While the jars are sterilizing, make the jam by scraping the fruit and sugar into a large stock pot (you need it big as the jam will boil and foam up a lot). Add the lemon juice. Place the lavender in the center of a small piece of cheesecloth and gather the corners together and tie securely together so the lavender is inside. Add to the plum mixture. Turn the heat to medium high and bring to a boil. Place four or five metal spoons in the freezer.

5. Once the plum mixture has started to boil, reduce the heat to a simmer and let it cook down until it starts to thicken, like cold maple syrup. If you have a candy thermometer you want it to be roughly 220˚F. I can’t tell you long this will take as it’ll depend on how ripe your fruit is. It may take 15-20 minutes, it may take 60 minutes. It took me close to 45 minutes to get there.

6. Once plum jam looks thick enough, test it by placing about a teaspoon of it on one of the frozen spoons. Place it back in the freezer for 3 minutes. Pull it out and poke it with your finger. If the jam “wrinkles” you’re good to go. Stop cooking the jam. Remove the lavender sachet and discard. Pull the jars from the oven, turn the oven off and turn the large stockpot full of water on again and bring it to a boil. Fill the jars with the hot jam, leaving 1/4-inch headspace in each jar. Remove any bubbles you see in the jam with a toothpick. Make sure the edge of the jar is clean and dry and there isn’t any jam on it. Place a lid on top of the jar tightly, and then use a ring to close it (don’t tighten too much, just tight enough to keep the lids on there).

7. Place the jars carefully in the boiling water for 10 minutes then turn the heat off and let sit in the water for another 5 minutes. Remove from the water and let sit on a wire rack to cool. The jars should seal with a satisfying ping noise as they cool and seal. Sealed and processed jars will keep on the shelf for 1 year. If a jar doesn’t seal let it cool to room temperature and stick it in the fridge for immediate use. Once open, the plum jam should be consumed within a month.

Makes 3-5 cans of jam depending on the ripeness of the fruit.

Plum jams come in all sorts of flavor. If you like this plum jam recipe check out my small batch ginger plum jam which is fast and easy to make, no canning required.

This blog currently has a partnership with Amazon.com in their affiliate program, which gives me a small percentage of sales if you buy a product through a link on my blog. I only recommend products (usually cookbooks, but sometimes ingredients or equipment) that I use and love, not for any compensation unless otherwise noted in the blog post. If you are uncomfortable with this, feel free to go directly to Amazon.com and search for the book or item of your choice.
1411shares