An ex-boyfriend of mine, who I rarely think of nowadays, had a fondness for pineapple upside down cake. I made it a few times for him back in the day, and it usually involved canned pineapples rings and those obscenely nuclear red jarred Maraschino cherries. Once we broke up, I pretty much forgot about the cake, a bygone dessert that people don’t make so much anymore. Like ambrosia fruit salad, crown jewel cake and frog-eyed pudding (or pretty much any dessert using instant pudding, cool whip or jello), pineapple upside down cake is one of those desserts that seem lost to the midwest potlucks of yesteryear. That is, until I happened upon it at the dessert buffet at a luau while in Hawaii. 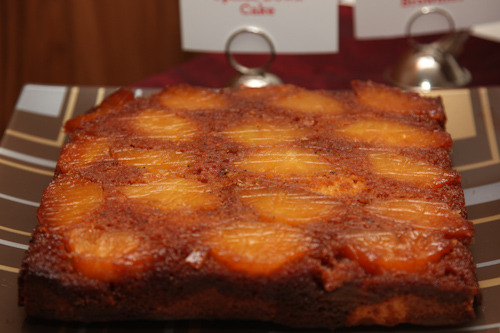 Not your typical pineapple upside down cake. This one uses fresh pineapples.

I’ve been to a few luaus before in my various trips to Hawaii. It’s one of those tourist trap things that are actually decent to do, but you don’t need to go more than once. Sort of like people visiting San Francisco should go to Alcatraz, but really once is enough. The luau usually contains an all you can eat buffet of traditional Hawaiian food (now’s your chance to try poi, because you probably aren’t going to order a whole dish of it at a restaurant) as well as a show that explains the history of Hawaii. Open bar rounds out the evening of food and entertainment, which, of course, makes the evening all the more fun (if you drink. I don’t so much). 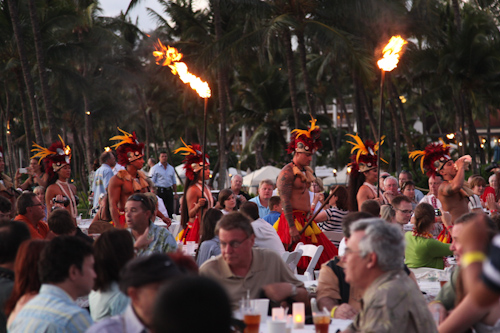 People feasting while the entertainment starts.

While in Maui, my mom and dad decided to come out and visit as well as my sister and her husband. None of them have been to Hawaii before and so AJ and I thought it best they experience a luau to round out the Hawaiian trip. We had originally scheduled it for early in the trip (to get them in the “Hawaiian spirit”) but sadly, with my rogue wave incident, it was postponed for a couple of days. Tickets were purchased via Costco at discount (if you visit Hawaii, Costco memberships are a must, it’s one of the cheapest places to shop for anything). 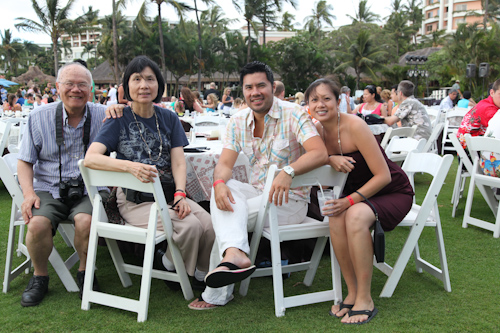 Mom and Dad and Natatia and me at the Luau.

While I sipped on virgin coladas (to compensate AJ had his with two types of rum, making sure we got our money’s worth), I made sure to wander over to the underground roasting pit, where they had buried the kalua pig. The unveiling of the pig is always a spectacle, and well, the men who were unveiling it, were also quite the spectacle. 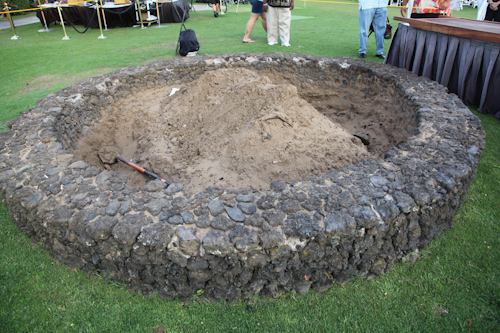 The underground fire pit, called an imu, which is roasting the kalua pig. 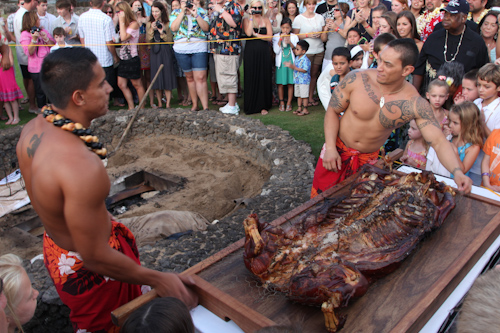 Pulling out the kalua pig. 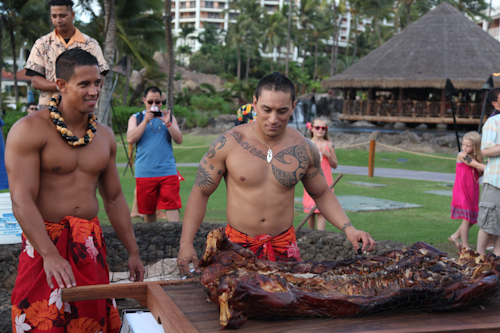 Posing with the pig while the crowd watches and takes pictures of the hot meat.

The show itself, featuring some of the men who pulled out the kalua pig, along with women hula dancers, a storyteller and a world champion fire dancer was entertaining. There was even an acrobatic part of the show, where a woman climbed fabric (I believe it’s called aerial silk or tissu) in front of us, all to Hawaiian music. Though not the most traditional of luaus (fire dancing is more of a Samoan dance than a traditional Hawaiian dance) it’s always impressive to see people throw fire around and dance through open flames. 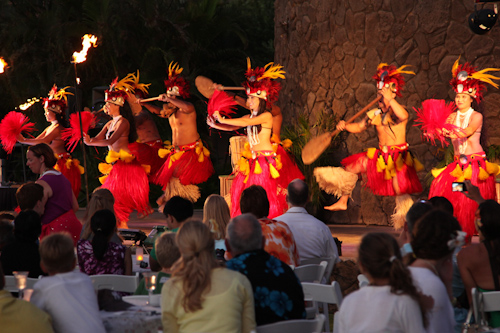 The history of Hawaii being told in song and dance. 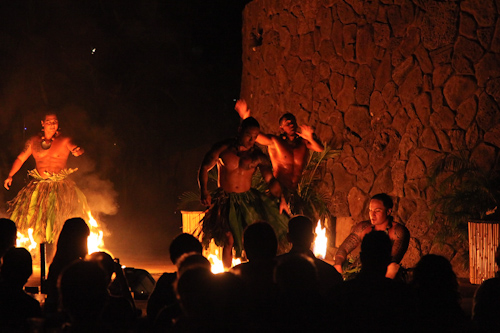 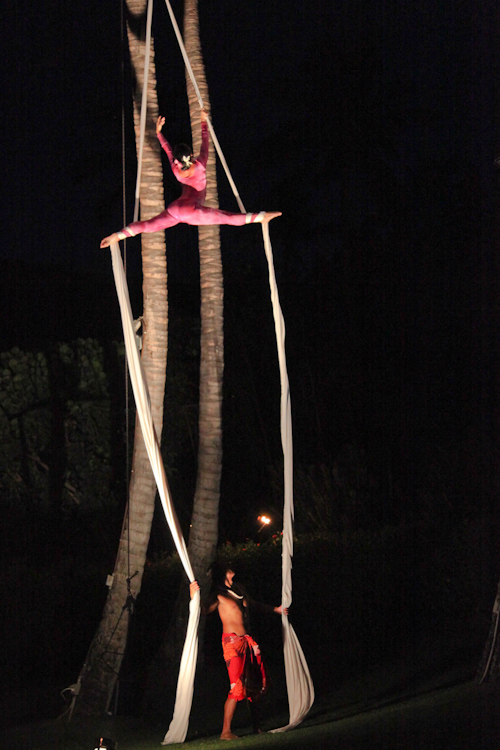 Aerial Silk or Tissue is performed as well, just for the heck of it.

The food was plentiful, though, as with most buffets, not the best ever. But often quantity rules over quality in occasions like this. But that didn’t stop me from piling on the food, taking to heart the Hawaiian saying “Eat until your tired…” which I attempted. AJ was a little more sane with his plate, though he did head back from a second plate as did my sister and her husband. I did head to the dessert area to check out what they had to offer (how could I turn down dessert?) and there was the individual pineapple upside down cakes for the taking. 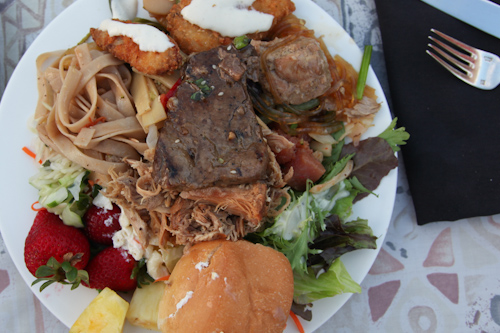 I ate until I was tired. 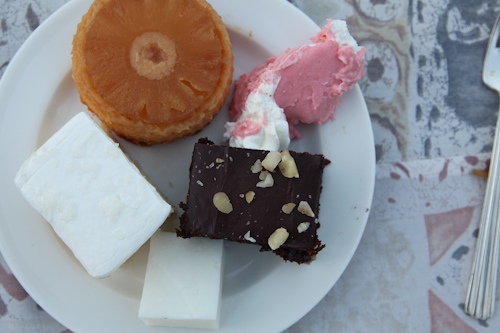 Then I ate dessert. Note the individual pineapple upside down cake!

I had forgotten about pineapple upside-down cake until that moment. And though I never did get a chance to make it in Hawaii, I immediately made it once I got home. This time I opted to go with real pineapple, no artificially colored cherries (actually I opted to skip cherries all together) and make a caramel glaze for the moist rich cake to soak into. The pineapples were cooked on the stove in the caramel syrup, caramelizing themselves into sweet chunks of tropical flesh and the entire cake was served up for my dessert party. 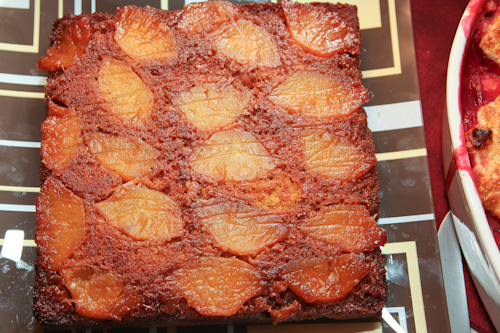 I mentioned the fresh pineapples. Did I mention it has hints of coconut and ginger in it as well?

I’m no longer in touch with my ex-boyfriend, and in truth, I have no desire to be. He’s was part of a different life, one that involved canned and jarred fruit. But I wish him the best and I thank him for introducing me to pineapple upside down cake. Without him, I probably would never have known about pineapple upside down cake, well, at least I never would have known about the old school canned pineapple type. And I never would have known how vastly improved this version is.

2. Place the 150 g sugar in a heavy bottomed pot with a silver bottom (try to avoid nonstick, as the dark bottom will make it hard to judge the color of the caramel), and cook over medium heat until it starts to melt. As it begins to melt, stir with a heatproof spatula or wooden spoon to ensure that all the sugar heats up. Continue to cook until the sugar starts to brown. When it does, turn off the heat and let the residual heat caramelize the sugar, until it is an even translucent golden brown. If it is not caramelizing fast enough or stops, turn the heat on to low to give it a little nudge.

3. Once the sugar hits golden brown, carefully add the butter (it was steam and sputter so use caution) and then add the pineapple chunks and turn them to evenly coat. If the caramel seizes and hardens don’t worry it’ll melt again while you cook it. Bring the heat to medium high and cook until the harden caramel bits melts and the liquid starts to boil. Turn down to medium low and simmer the caramel until the pineapple turns golden brown, about 8 to 12 minutes and toughens slightly. Remove the pineapple pieces by a fork, and reduce the heat to low. Add the ground pepper, cinnamon and cut the vanilla bean lengthwise and scrape the seeds into the caramel. Cook for another 3 or 4 minutes until the caramel is thick and syrupy. Remove from heat.

4. Preheat an oven to 350˚F. Lightly spray a 9” x 9” square pan with cooking oil and then line with a piece of parchment paper, making sure the parchment paper overhangs the edges by a couple of inches. This will allow you to remove the cake without worrying about any pineapple pieces sticking to the pan. The cooking oil will help stick the paper in place.

5. Arrange the pineapple slices on the bottom of the pan, cutting them into smaller pieces if you have to to make them all fit. Spoon and scrape the caramel sauce over the pineapple pieces.

6. Place the flours, baking powder and ground ginger in a medium bowl and then, using a balloon whisk, vigorously stir the dry ingredients together to a uniform consistency. Place the eggs, egg yolks and salt in a large mixing bowl and beat with a whisk until uniform in color and you can’t see any egg whites. Add the sugar, butter, coconut oil and vanilla extract to the eggs and beat until incorporated. Mix the dry ingredients into the wet ingredients until incorporated.

8. Let cool in the pan for 30 minutes on a wire rack and then place a serving plate over the cake pan and invert to remove cake. Gently remove the parchment paper and serve warm or at room temperature.

This blog currently has a partnership with Amazon.com in their affiliate program, which gives me a small percentage of sales if you buy a product through a link on my blog. I only recommend products (usually cookbooks, but sometimes ingredients or equipment) that I use and love, not for any compensation unless otherwise noted in the blog post. If you are uncomfortable with this, feel free to go directly to Amazon.com and search for the book or item of your choice.
213shares