For the past month of December, just before Christmas, I’ve been helping a friend out at a fancy department store, working in their epicure section. In fact, I’ve been handing out cookies to rich people browsing and walking around in their designer jeans that cost more than my share of the rent for the month. They are usually quite nice (after all, I am just giving them a cookie and who doesn’t love a cookie?) though, on occasion they haven’t been (those are stories for another time). Of course, I’m not one to judge, as I once wore those exact same designer jeans (often bought at a fraction of the price, at Loehmann’s or Marshall’s, but no one needs to know that but me). Still, I wonder at people’s priorities. In the epicure section, I saw people buy extremely expensive chocolate truffles, fancy cookies (the ones I was sampling) and large tins of overpriced popcorn. Somehow I can forgive them for buying the chocolate (hey, good chocolate is expensive) and the cookies I was handing out (they are made in Japan without preservatives and shipped fresh to order). But it seems criminal to me that people were spending $48 for a large tin of popcorn. Since I happen to buy organic popcorn in bulk at the local co-op grocery store for $1/lb, the idea of spending $48 for popcorn seemed ridiculous, no matter what the flavor or fancy tin it came in. Once my stint at the department store was up, I decided I had to make a holiday flavored popcorn, one that was easy and way cheaper than $48, for you guys to enjoy. Thus I created my Christmas Peppermint Candied Popcorn. 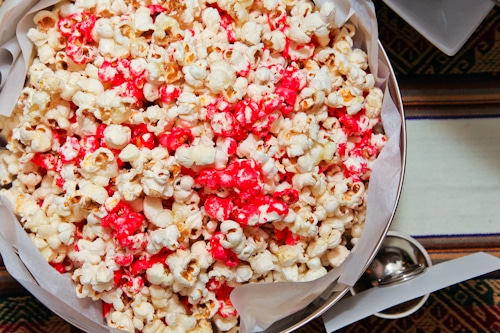 Now my sister is obsessed with popcorn. She once ordered three giant tins of popcorn from Target, only to have them delivered with dented tins, and so she complained and had them deliver three more tins to her, free of charge. In fact, I have a distinct memory of her getting SO excited about visiting St. Louis (our hometown) for the holidays one year as a store called POPtions – gourmet popcorn had just opened up. She dragged AJ and my brother out to the suburbs so she could sample and buy all the different flavors there. She’s actually quite the popcorn connoisseur, explaining the different types of flavors of popcorn, and what she likes and doesn’t like. But I never really thought much of popcorn, until AJ and I rediscovered how to make it on the stove.

The fact is, we always just threw the pre-packaged popcorn bags in the microwave and pressed the on button. It was easy and brainless, until one day I decided I had to buy some heirloom popcorn at the farmer’s market and make it on the stove. I had never actually made popcorn on the stove (neither had AJ). Growing up we had an air-pop machine (the type that allowed you to melt the butter in the tray on top, which meant I always melted WAY too much of it, and ended up making my popcorn soggy). Then, when we got our microwave (oh man, now I feel old, I lived in a time when microwaves weren’t in everyone’s house) we used the bags and never looked back. Turns out, the stove is not only incredibly easy, but also tastes better (and, according to studies, much better for you). I was sold. Popcorn on the stove from now on (that said, if you want instructions on how to make your own microwave popcorn – without the chemicals, just bounce over to my wordless recipe on honey caramel popcorn). 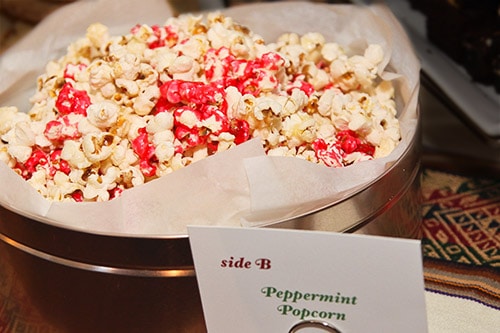 Peppermint Candied Popcorn, significantly cheaper, but still in a tin.

Now, feel free to use microwave popcorn for this recipe, I’m not snooty (did I mention I shopped at Marshall’s?). Try not to use the super buttery kind though, just one that has salt in it. The salt adds to the flavor. But if you do happen to have some loose popcorn kernels floating around and you want to use the stove method, I’ve included that in the recipe below. Something tells me my sister would approve of this holiday flavored popcorn, and it won’t break the bank like the tins at the fancy department store. Happy holidays folks! 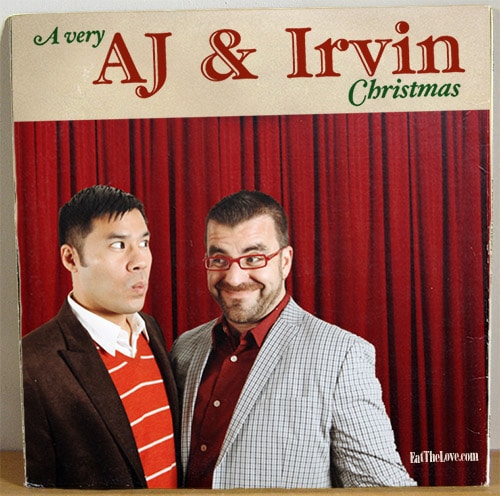 Have a Very AJ and Irvin Christmas indeed!

Popcorn is one of those neutral flavored foods that takes to anything you want to throw at it, sweet OR savory (or both). Most recipes out there for peppermint popcorn has you crushing candy canes and throwing it in with the popcorn and then drizzling it with white chocolate. Usually that means clumps of sticky candy pieces at the bottom of the tin and chunky heavy white chocolate covered popcorn. This recipe is made with just sugar, a touch of corn syrup to keep the sugar from crystallizing and some peppermint oil. Red food coloring is optional. Feel free to cut the recipe in half if it’s too much popcorn for you (but I make large batches because it’s pretty addictive). If you want, you can also substitute in pre-packaged microwave popcorn instead of the stovetop popcorn. Just use two bags of natural flavored popcorn, with minimal amounts of buttery flavoring on it. Be sure there’s some salt on it though, as it’s a nice foil to the sweet peppermint candied coating.

1. Place the oil and salt in a large stockpot. Add three or four kernels of popcorn to it and turn the heat on high, covering the pot partially and shaking occasionally, until all the kernels have popped. Remove from heat and add the rest of the popcorn kernels. Shake to coat with salt and oil. Wait 30 seconds.

2. Turn the heat back on to medium high and cover the stockpot with a lid partially (you need to keep it open to let the steam escape. Or cover the stockpot with a splatter guard mesh screen if you have it. Shake the pot while the kernels pop, to make sure the unpopped kernels stay on the bottom, and the popped kernels rotate up and don’t burn. Once you hear the popping slow down to about 2 seconds between pops, turn the heat off and pour the popcorn into a large heatproof bowl with a silicon trivet underneath (or a damp towel, to keep the bowl from sliding around).

3. Line two large rimmed baking sheets with silpats, wax paper or parchment paper. Place a medium sized bowl of water and ice (big enough for your hands) next to the stove, in case you get any of the hot sugar syrup on your skin

4. Place the sugar, corn syrup, and water in a medium size pot. Heat the sugar on high until the sugar dissolves. Reduce to medium high and cook until the sugar reaches the hard crack stage (310˚F on a candy thermometer, or when a drop of the sugar syrup in a glass of cold water hardens and is brittle when you try to bend it). Remove from heat and carefully add the peppermint extract (it will boil and steam, so be careful) and stir to incorporate. Quickly drizzle the sugar syrup over the popcorn, while stirring the popcorn with a large heatproof spatula, to evenly coat the popcorn. Again, be careful as the syrup is hot.

5. Quickly and carefully spread the coated popcorn on the lined baking sheets, trying to break up and clumps. Let cool, then break apart any popcorn clumps and serve for the holidays, or anytime you want!

Note. If you are using the red food coloring, divide the popped popcorn into two bowls, 2/3 into one bowl, and 1/3 of the popcorn in the other. Make the syrup in two batches. Use 1 cup of sugar, 1 tablespoon of corn syrup and 1 teaspoon of peppermint extract in the first batch, and pour it over the larger amount of popcorn, then spread it out on one of the baking sheets. Then use 1/2 cup of sugar, 1 1/2 teaspoon of corn syrup and 1/2 teaspoon of peppermint extract in the second batch of syrup. Add the red food color at the same time as the peppermint extract (again being careful, as it will splatter). Pour the red colored sugar syrup on the smaller amount of uncoated popcorn and spread it on the second baking sheet. Once they both have cooled, mixed together.

Makes about 20 cups of popcorn

This blog currently has a partnership with Amazon.com in their affiliate program, which gives me a small percentage of sales if you buy a product through a link on my blog. I only recommend products (usually cookbooks, but sometimes ingredients or equipment) that I use and love, not for any compensation unless otherwise noted in the blog post. If you are uncomfortable with this, feel free to go directly to Amazon.com and search for the book or item of your choice.
80shares