My parents, sister and her husband had left the Maui after spending six days with us. Afterwards, AJ and I were on what we called “our bonus days” – the extra few days past July, into August, that we had scheduled to roundout our stay in Maui. We had told everyone (and ourselves) that we were going to Hawaii for the month of July, but because of a cheaper flight we actually were flying out on August 3rd. My mom was sad to leave (and I was sad to see her go as well) but before she left, she handed me a number of leftover goods, items that she had bought but didn’t have a chance to eat. “Be sure to use these up!” she instructed me, in her typical Chinese mom ways, loathing to waste food. She handed me half a head of red cabbage, three old carrots, two shiny apples, an orange yam and a few other odds and ends (I’ll totally admit that I didn’t use up the half box of quinoa flakes she left me – hopefully the cleaning lady or the next tenant will enjoy them). Looking at my bounty of produce, I realized I had the fixing in our fridge for a sweet potato pie, that is, a Hawaiian style sweet potato pie, featuring American Orange Yams and Okinawa Purple Sweet potato with Macadamia Nut. 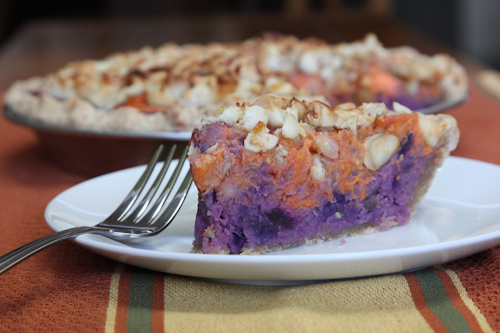 My parents had never been to Hawaii. They had talked about coming out to the islands, after reading my post last year on our vacation to Kauai and Oahu. She was particularly impressed with the aerial shots I had taken (or AJ had taken) whilst on our helicopter tour. “I can’t believe you did that! I would be so scared.” She proclaimed to me, both in admiration and concern that I would risk my life in such a daredevil way. I assured her that the helicopter ride was perfectly safe (though I might have neglected to tell her that we did the helicopter ride without the doors – shhhh…don’t tell). 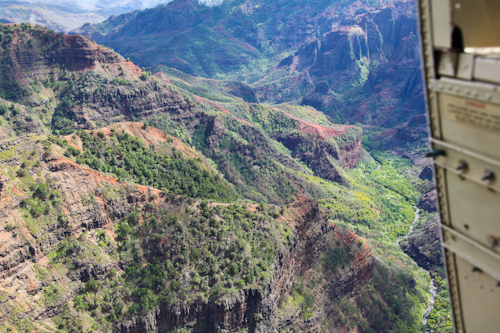 The shot of the Kauai landscape from our helicopter tour. One of the best hours of my life.

When we initially told my parents that we were looking for someone to stay at our place when we went away for our paradise vacation, they immediately asked if they could stay at our apartment. AJ and I were thrilled that they would want to come out to San Francisco (they’ve been talking about retiring out here for ages) and loved the idea of them staying in our place, people I love and trust as opposed to complete strangers. I was rather sad though, that they would be in my adopted hometown and AJ and I wouldn’t be able to see them. What a shame, I thought to myself, that they would fly out to the west coast, but I wouldn’t be there to spend time with them. Luckily, while in San Francisco, they decided that a quick trip to Hawaii would be worth their while. 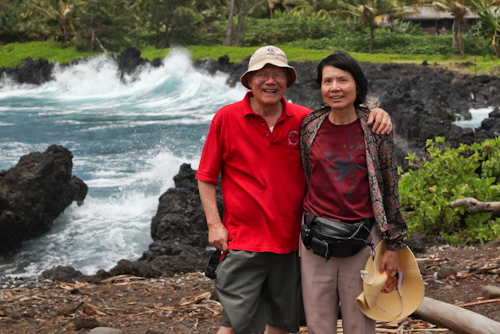 Dad and Mom on our road to Hana.

Once they decision was made, it wasn’t hard to convince my sister and brother-in-law to join up with us even if it meant flying out from Baltimore across the country. My brother and his wife in Sacramento were more problematic, and in the end, they decided not to come out, as traveling with an 18 month old toddler would probably negate any relaxation that they might get from going to a tropical vacation. Perhaps next time we can all do a family reunion out in Hawaii, reliving my Brady Bunch Hawaii episode fantasy (don’t pick up that tiki doll!). 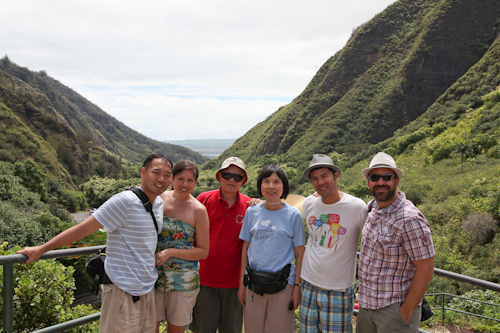 The Family posing at the Iao Valley over in West Maui.

The family trip was a short whirled winded trip full of exciting adventures. A visit to the Iao valley in West Maui, a hike on the top of Mt. Haleakala to see the sunrise and cinder cone, a roadtrip around the island to Hana, a few trips to the beach, a surprise trip to the ER in an ambulance to the only hospital in Maui and a Hawaiian luau completely with fire dancing. My family left exhausted but happy to have seen Maui (with everyone all in one piece). My dad seemed especially pleased that AJ, my brother-in-law Peter and I all drove the family around, showing them the sites. “You guys could be tour guides!” He said to AJ and I more than once, happy to not have to drive, and thrilled to see the exotic sites of the island. On their last day, my father eagerly turned to us and asked “Are you coming back her next year? Maybe we could do this again… Or another island. We could do another island. Or somewhere else. How about Alaska?” AJ and I smiled at that thought of spending more time with them in Hawaii, or some other location, happy that they enjoyed their trip. 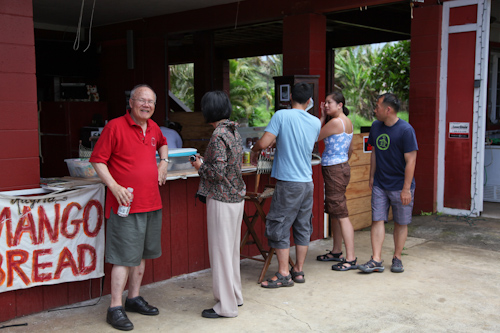 The Family ready to enjoy some Mango Bread on the Road to Hana. 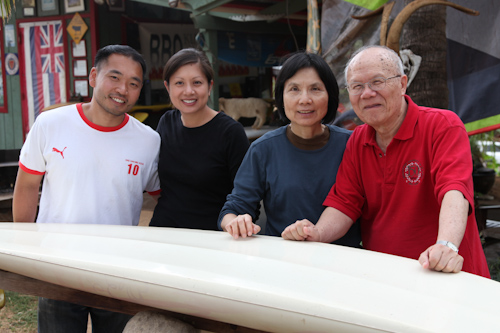 Peter, Natatia, Mom and Dad at the Surfing Goat Dairy.

After we shuttled my family off the airport, AJ and I took a deep breathe and looked around our condo, suddenly alone without a tight agenda of tourist must do. We had three days left all to ourselves before returning to reality of the mainland. We didn’t want to go back, but we knew we had to. But not before hitting the beach one more time. Until next time, paradise. Aloha! 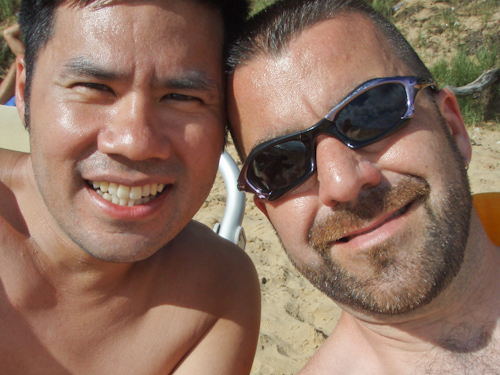 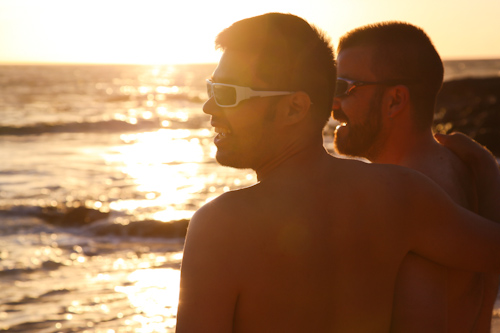 Saying goodbye to Maui. Until next time. Aloha!

Okinawa Purple Sweet Potatoes can be found at Asian grocery stories and some specialty stores. They look deceptively brown from the outside, but when cut into, the flesh is a brilliant indigo purple. Cooked, they taste similar to their orange siblings but with a striking color difference. Combined with traditional American orange sweet potatoes (or yams as they are often called in the grocery stores) the color contrast makes for a wonderfully stunning dessert with an old time flavor. 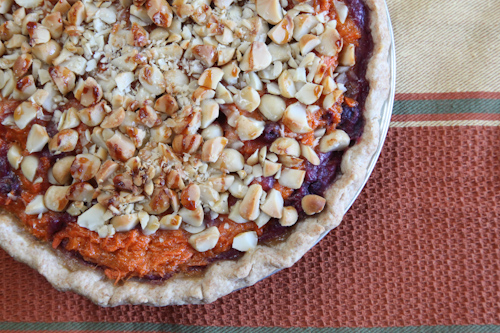 1. Place the flours, salt, and sugar in a large mixing bowl. Using a balloon whisk, vigorously stir the dry ingredients together until uniformly distributed. Cut the butter into 1/4 inch pieces. Sprinkle over the dry ingredients and toss to coat. Flatten the cubes of butter with your fingers, until all the butter has been smashed. Then start rubbing and squeezing the flour and butter together, until the ingredients start to clump together.

2. Sprinkle the water and rum over the flour butter mixture and toss with a fork until it forms a dough. If the dough seems too wet, sprinkle a little more flour onto it and fold it in, but the dough is meant to be a tacky wet. Gather the dough and flatten into a 1/2” thick disk. Wrap tightly with plastic wrap. Place in the refrigerator for an hour or overnight.

3. Once the dough has chilled, preheat the oven to 350˚F. Bring a large pot of water to a rolling boil. While the water comes to a boil, peel and slice the potatoes into 1 inch chunks. Boil for 15 minutes (or until fork tender). Drain and separate the orange and purple potatoes into 2 different medium sized mixing bowls and mash (with fork, potato masher, or if you are in a not well equipped vacation condo, with your hands). 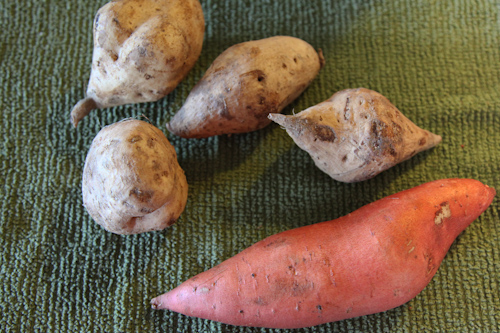 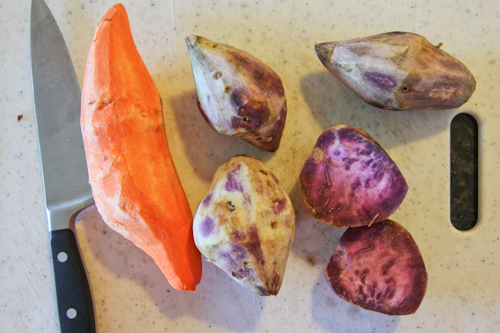 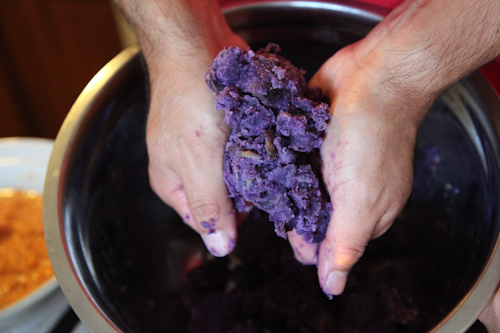 Mashing the sweet potatoes by hand because our condo doesn't have a potato masher.

5. Roll the chilled dough on a generously floured surface to form a 10” disk. If the dough is too sticky, add more flour to the rolling surface and the dough surface as well (this dough is really forgiving because of the rum and can take as much flour as you want to add to it). Fit the disk into a 9” pie pan. Decoratively flute the crust edges of the crust. 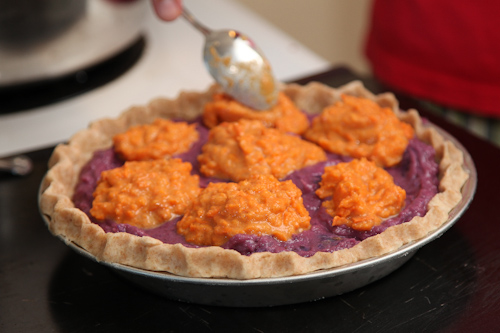 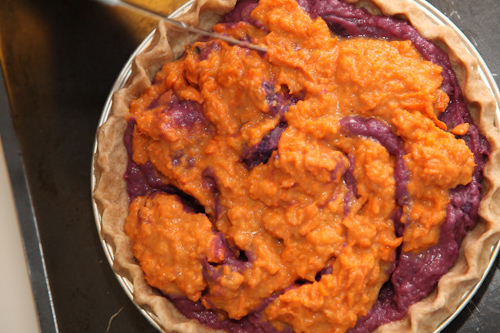 Swirling the filling together. 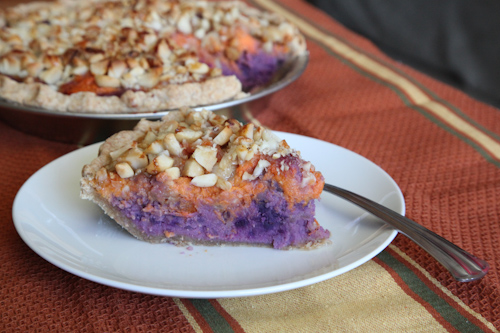 This blog currently has a partnership with Amazon.com in their affiliate program, which gives me a small percentage of sales if you buy a product through a link on my blog. I only recommend products (usually cookbooks, but sometimes ingredients or equipment) that I use and love, not for any compensation unless otherwise noted in the blog post. If you are uncomfortable with this, feel free to go directly to Amazon.com and search for the book or item of your choice.
507shares
This site uses cookies: Find out more.