These mole chicken wings are first marinated in tequila lime making them tender, juicy and savory sweet with every bite. Totally worth the effort! (Jump directly to the recipe.) 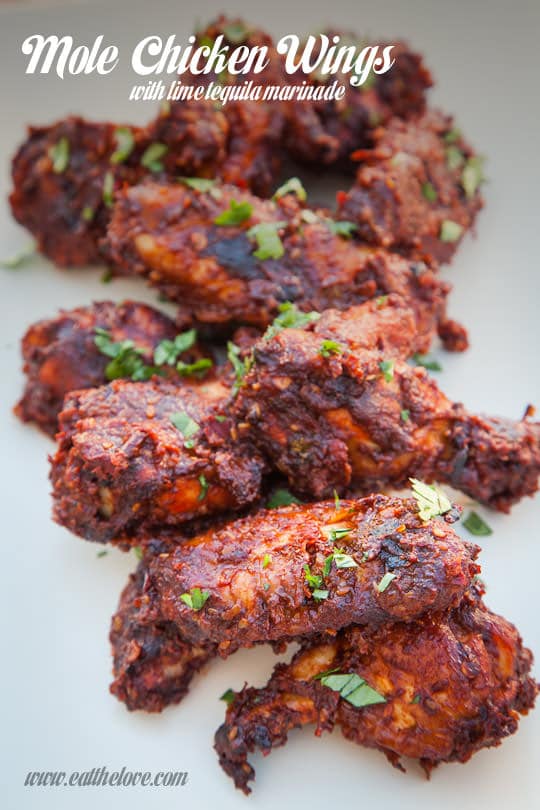 “Mmmmm…” mumbled AJ with his eyes wide open and a big grin on his face when he took a bite of my most recent wing recipe. Chicken Wings Week has taken a toll on us and I was fearful that he and I would be burnt out on wings. In fact, at one point I turned to him and asked if he thought I should just post a recipe for buffalo wings. Not that buffalo wings are bad, but the recipe is pretty basic – fry the wings and cover them with Frank’s hot sauce mixed with butter. You don’t mess with a classic. But there are a million recipes out there for buffalo wings on the internet (try my friend Elise’s version over at Simply Recipes) and lets face it, it’s not really something I had much interest in blogging about. Then I offered AJ my other idea, mole chicken wings marinated in tequila lime. AJ’s eyes light up and I knew that’s what I was making. 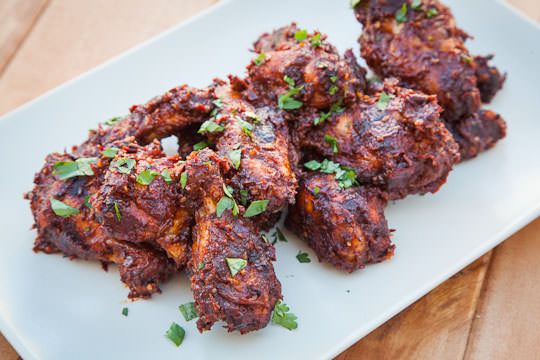 Now the idea of marinating chicken in tequila isn’t new. Nor is making mole chicken. But making wings with that combination? I haven’t really seen that around too much. Luckily I had a bottle or two of tequila floating around from my photoshoot with BevMo! They are always kind enough to leave me a few bottles to play with in the kitchen afterwards. Add some fresh lime juice and your wings are ready to play. 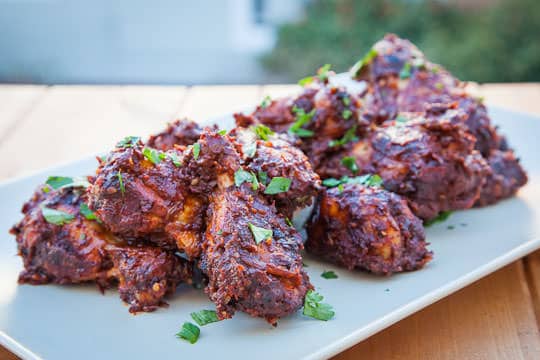 Of course, making mole sauce from scratch always seems like a bit of a project. I’m sure you can probably just buy the sauce pre-made in a jar, but trust me when I say it’s worth the effort. The ingredient list for the recipe may seem long but there are only a few specialty items that you need to get from the store. Otherwise you probably already have everything in your cupboard to tackle these wings. So don’t be afraid to make these wings! They’re worth the effort. 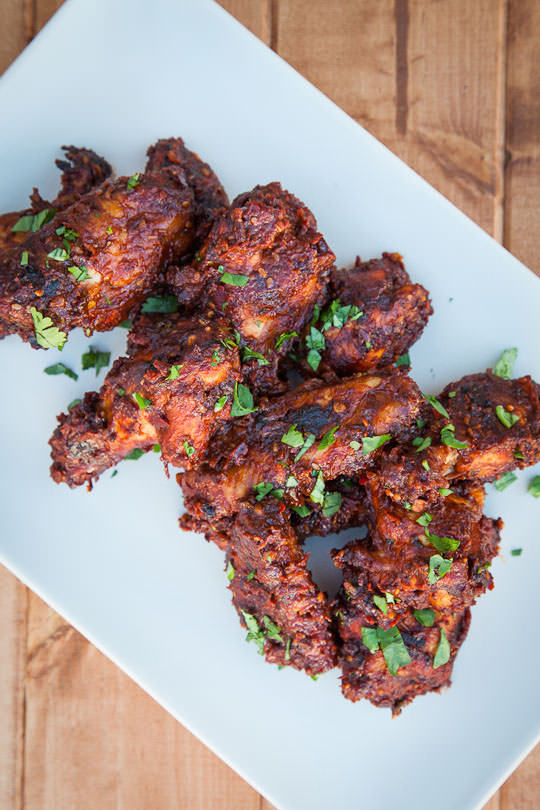 Be sure to visit Eat the Love all this week. I’ll be posting a new chicken wings recipe each day from Monday, January 20th to Friday, January 24, 2014.

Special thanks to BevMo! For providing a bottle of Tres Generaciones Plata tequila for me to play around with in the kitchen. I wasn’t monetarily compensated for this post and all opinions stated above are my own.

For those unfamiliar with mole sauce, it’s a slighty sweet and spicy Mexican sauce made with chiles and chocolate. The ingredients list for the mole sauce looks pretty long but most of the ingredients are fairly common and can be found at a regular grocery store or you may already have them in your cupboard. Don’t be scared by it because the recipe itself is fairly straightforward, despite the long list of ingredients. The only thing that may prove more difficult to track down are the chiles. If you have access to a Mexican or Latin American grocery store, that’s your best bet on finding the chiles. Otherwise, you can buy them online from someplace like Spice Rack.

Inspired by an Emeril Lagasse recipe and Bon Appetit recipe. 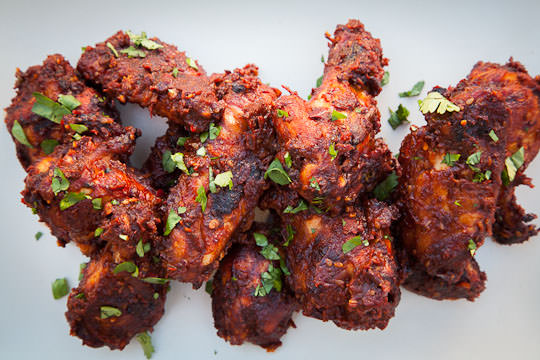 Directions
1. Make the marinade by placing the tequila in a bowl and juicing the limes into the tequila. Squeeze the garlic cloves through a garlic press (or mince finely) and add most of the cilantro (saving about a tablespoon for garnishing the finished wings). Place the wings in a large gallon ziplock bag and pour the marinade into it. Squeeze out as much air as you can, then seal the bag and “massage” the chicken to evenly distribute the marinade. Place the bag in a large bowl and refrigerate.

2. Make the mole sauce by heating the oil in a large sauté pan or pot on medium high. Add the chopped onions and cook until the onions are golden yellow, about five minutes. Reduce the heat to medium and add the almonds, garlic, cumin, coriander, black pepper, oregano, salt and cloves. Saute for another 2 minutes. Add the tomato paste, chopped chiles, raisins, sesame seeds, orange zest, orange juice and chicken stock. Bring to a boil, then reduce heat to a simmer and cover. Cook for 30 minutes, stirring occasionally to make sure it doesn’t burn on the bottom. While the mole sauce is simmering, go to the refrigerate and “massage” the chicken again to get the marinated mixed up in the bag.

4. While the chocolate is melting, preheat the oven to 400˚F. Spray two baking sheets with cooking oil. Once the mole sauce is ready, spoon it into a food processor and turn it on to puree the sauce, this will take two or three minutes. The sauce should be the consistency of thick BBQ sauce or ketchup. If it isn’t, add a little water to the sauce, one tablespoon at a time until you reach the right consistency.

5. Place half the sauce in a large bowl (reserving the other half in the processor bowl). Remove the chicken from the bag (leaving the marinate in the bag) placing it in the bowl with the sauce. Using a large spatula or spoon toss the chicken with the mole sauce until coated. Place the chicken on the prepared baking sheets. Throw away the marinade and any leftover mole sauce in the bowl that touched the raw chicken. Bake the chicken in the oven for 30 minutes, then remove and flip all the chicken over and bake for an additional 15-20 minutes. Let cool on the pan for 10 minutes.

This blog currently has a partnership with Amazon.com in their affiliate program, which gives me a small percentage of sales if you buy a product through a link on my blog. I only recommend products (usually cookbooks, but sometimes ingredients or equipment) that I use and love, not for any compensation unless otherwise noted in the blog post. If you are uncomfortable with this, feel free to go directly to Amazon.com and search for the book or item of your choice.
2813shares