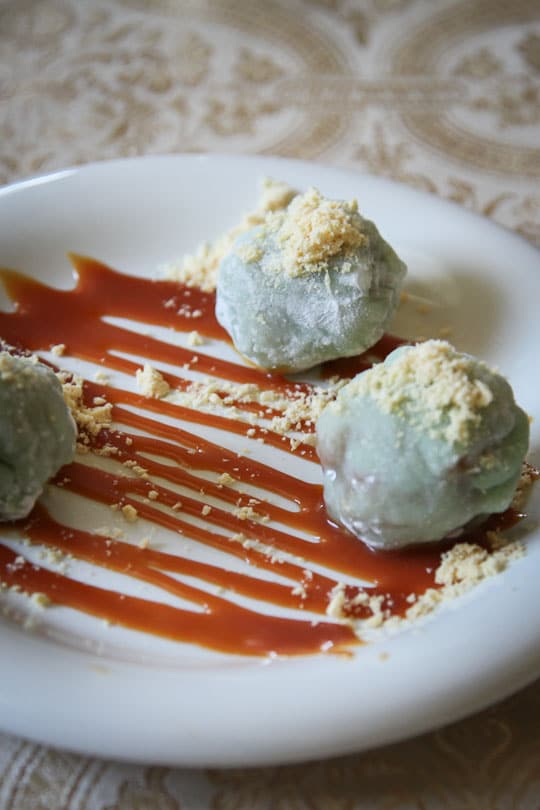 Years ago my friend Emmie (who does this awesome line of cards, and I’m not just saying that because I apparently inspired her “meat birthday card” but because her cards are truly awesome) made a dessert for a get together of ours.

This was especially impressive as she claims to have no real talent for cooking, and in fact would often call me up and tell me about how she would make herself dinner and then look at it, puzzled at that fact that the food she made was totally unappetizing. She claimed this happened on a regular basis.

This baffled me. If you are going to go through the trouble of making food for yourself, why would you make food that was unappetizing?!?! That’s what frozen/canned food is for! When I make food for myself I make sure to use only the type of food that I like!

For instance, when you open up a can of soup, you hope that most of the stuff in the soup is what you like but every now and then there’s that soup where you like MOST everything in it, but they stuck the lima beans in there, and you really can’t stand lima beans, so you spend most of the time while eating the soup picking them out.

Now if you had actually MADE the soup, you wouldn’t have bothered to put the lima beans in there in the first place. You have total control over what goes in? So if you are cooking, how is it that the food you make is completely unappetizing to you?

But I digress (something that I am oft to do). There are many things that baffle me about Emmie, and this is just one minor bafflement. I bring this all up because Emmie had brought to a get together a dessert that she made… and it was delicious. Mochi Pudding.

I have had mochi before, usually wrapped around ice cream. But here was delicious chewy mochi baked in a pudding form.

AND my friend, the woman who claimed that she couldn’t cook, had made it.

I asked her about and she said it was SUPER easy. INCREDIBLY easy. SO EASY that a trained chimpanzee could make it. This, of course, meant that she was equating herself to a chimpanzee, but I overlooked that obvious self deprecating slight and told her again how tasty her mochi was. She deflected the compliment and just said “It’s just easy.” 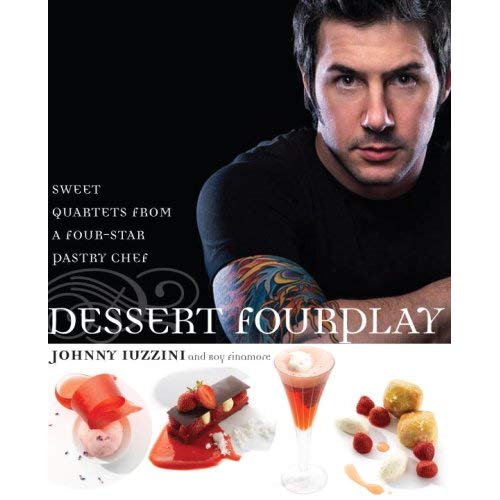 Regardless, that little exchange was my head when I check out a cookbook called Dessert Fourplay by Johnny Iuzzini from the library.

I like to test run cookbooks before I actually buy them and this one was no exception. It definitely had a lot of flash, but a lot of the recipes border on the whole molecular gastronomy trend, which I have mixed feelings about – but that’s another post for another time.

Dessert Fourplay didn’t necessarily have desserts that I would make, but on the whole it had a lot of great ideas, things I wouldn’t necessarily think to do. It’s a book I might invest in buying, not for the recipes per se, but more for the ideas that they bring to table. 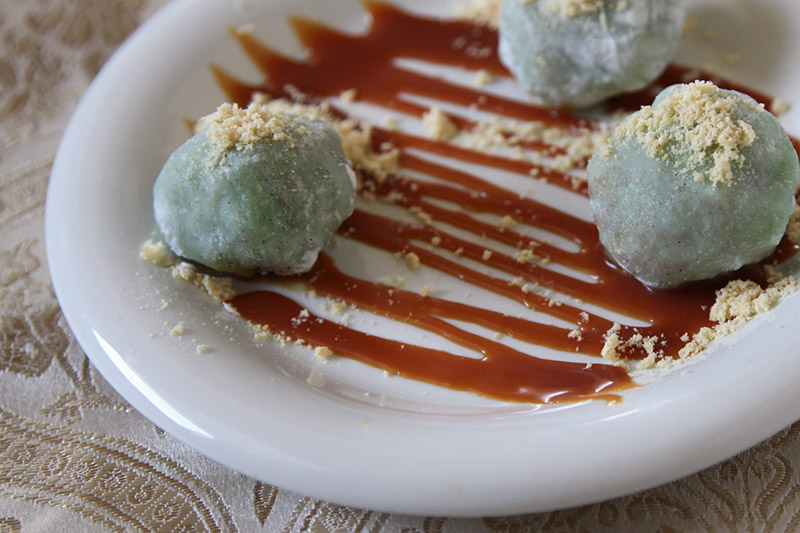 But as I read the recipe I realized that Emmie was totally right. Making mochi is downright ridiculously easy. SO insanely easy that an UNtrained chimpanzee could probably make it. So I whipped up what will soon be my go-to recipe for the “oh crap, I need to make an impressive dessert in less than an hour” situation that some how seems to come up in my life. 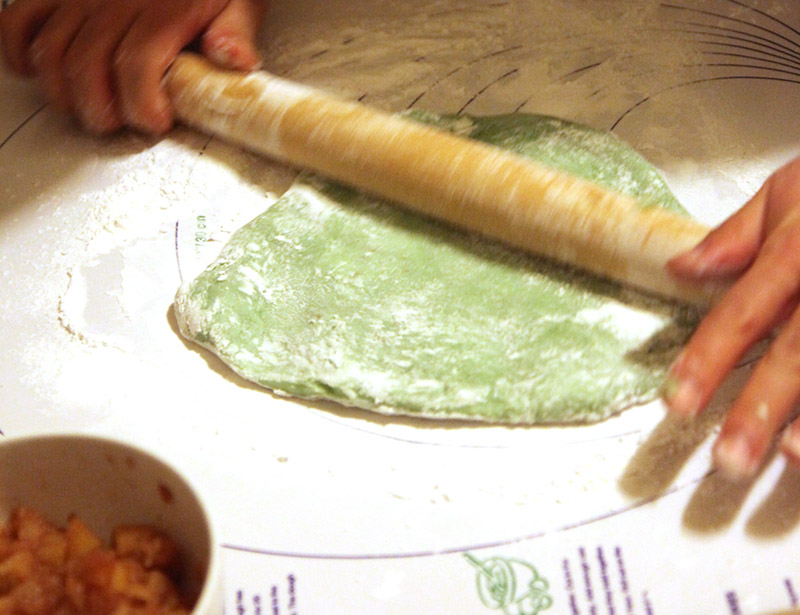 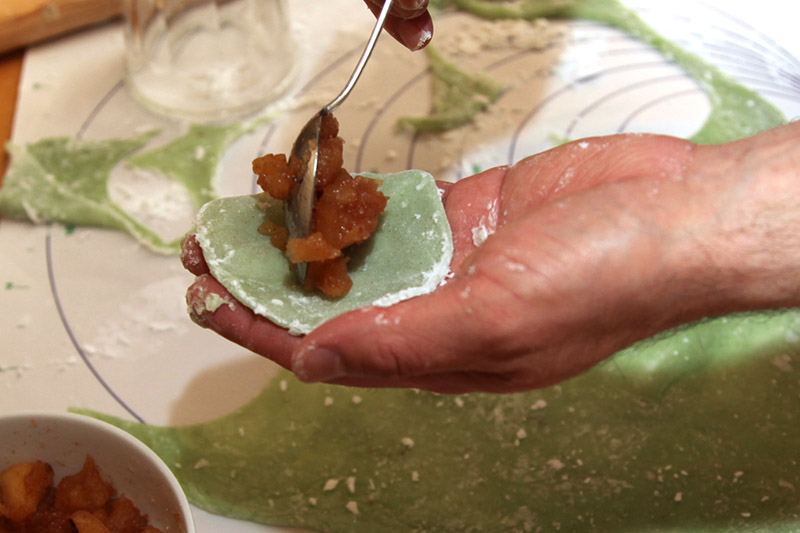 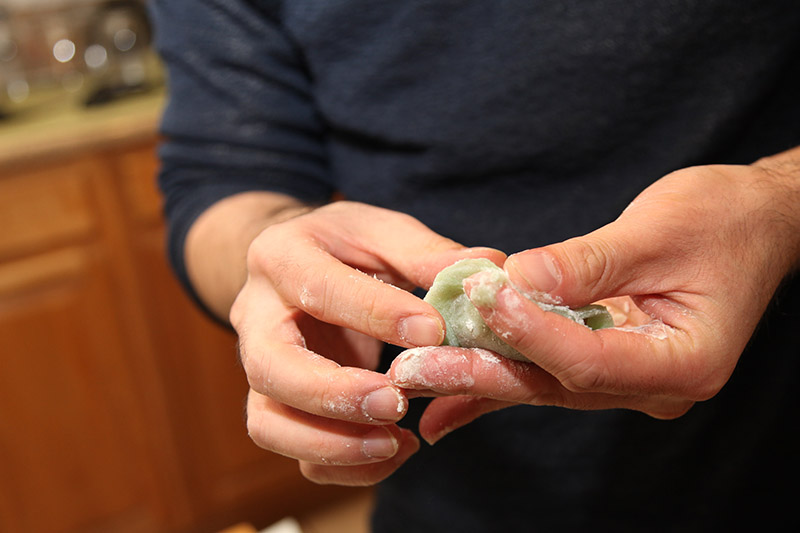 Note: Whilst baking, I was listening to Goldfrapp’s latest album Head First. It’s a total retro electro disco 80’s throwback which is great if you like that sort of thing.

How do you make mochi? It’s pretty easy. Super ridiculously easy in fact, if you have a microwave. Just stick the ingredients together, microwave and stir. The only downside is you have to work fast because once it cools, it’s hard to work with. But this naturally gluten free dessert is both easy and fun to make. It’s like kindergarten all over again, working with playdough! But this time no one is going to make fun of you for eating it.

(loosely based on a recipe from Dessert Fourplay by Johnny Iuzzini 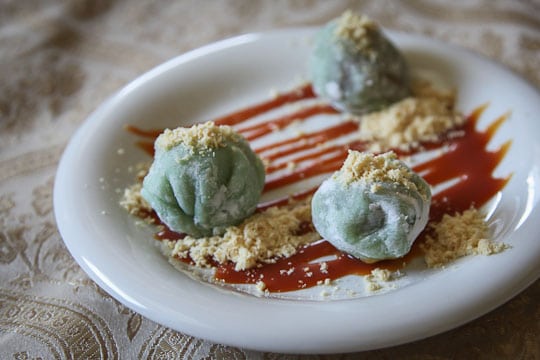 Directions
1. Make the apple compote filling by placing the water, sugar, vanilla bean with seeds intact, rum, spices and salt in a saucepan. Bring to a boil and simmer until sugar dissolves and the whole thing thickens – about 5 minutes. Add apples, bring back to a boil, and simmer until apples are tender and liquid has reduced – about 15 minutes. Cool, then remove vanilla pods (you can rinse and save it for another use).

2. Once the filling has cooled, make the apple mochi by first lining two empty egg cartons with plastic wrap and dust with potato starch. Dust a work surface generously with potato starch or cornstarch. Put the freeze dried apples in a food processor/spice grinder/blender or an old school mortar and pestle and grind to powder. Reserve 1 or 2 tablespoons of the apple powder to dust the final mochi.

3. Place flour, remaining freeze dried apple powder, sugar and salt into a microwave safe bowl. Add 3/4 cup of water (and two drops of green food coloring if using) and mix into a paste. Cover with plastic wrap and stick it in the microwave for 90 seconds. Take out and stir mixture. If the mixture seems tight, add the remaining 1/4 water. Cover back up with plastic wrap and microwave for another 60 seconds. The dough should darken and become opaque.

4. Working quickly, roll the warm dough into 1/16th thickness. Cut 3 1/2 inch rounds of dough (I use a wide rimmed jar since I don’t have a cookie cutter that size). Holding the round of dough, put about 1 tablespoon of apple compote into the middle and pinch the dough around it to close it (you can stretch the dough if you need to) and place the mochi dumpling in the egg carton seams side down. Repeat for the rest of the dough, cover with plastic and refrigerate until you use.

5. To make the caramel sauce, put sugar and water in a large saucepan and stir to dissolve sugar into water. Take a pastry brush and “wash down” the sides of the saucepan with water to remove all sugar crystals. If you don’t, the sugar will crystalize and it’s a pain in the butt to caramelize properly.

6. Crank the heat up to boil, then lower heat to medium high and cook until liquid starts to turn golden amber. Do not stir, but you can swirl the sugar around while cooking it. When it hits the golden amber stage, pay attention and start pulling the pan off the stove and swirling it around so all the color is even distributed. I like to pull my caramel to a dark brown, almost mahogany color, but if you aren’t experienced in making caramel or don’t like the smokey flavor that a dark caramel gives, don’t risk it and turn off the heat. Be really careful as caramel can go from delicious dark brown to burnt black quickly and you have to start over.

7. Immediately pour the heavy cream or coconut cream into the pan carefully. This will stop the cooking, but also cause a huge amount of steam and boiling. This is why you need to use a large saucepan (even if you are only making this small amount of caramel. Take a whisk and stir the caramel around until all the hard caramel is dissolved. Sprinkle and whisk in salt. Cool the caramel in the pan and drizzle with a spoon onto the plate with the apple compote mochi. Or pour it into a squeeze bottle (like the old school diner ones that use to serve mustard and ketchup – you can get them at any restaurant supply place for cheap) and squeeze out the sauce all pretty like on the plate. Serve mochi with caramel sauce and a light dusting of the apple powder.

This blog currently has a partnership with Amazon.com in their affiliate program, which gives me a small percentage of sales if you buy a product through a link on my blog. I only recommend products (usually cookbooks, but sometimes ingredients or equipment) that I use and love, not for any compensation unless otherwise noted in the blog post. If you are uncomfortable with this, feel free to go directly to Amazon.com and search for the book or item of your choice.
84shares