You are here: Home / cheesecake / Lemongrass and Rhubarb Cheesecake (Kosher for Passover optional)

This unique lemongrass and rhubarb cheesecake is beautifully fragrant with infused grassy citrus lemongrass and a stunning red rhubarb streak inside. (Jump directly to the recipe.) 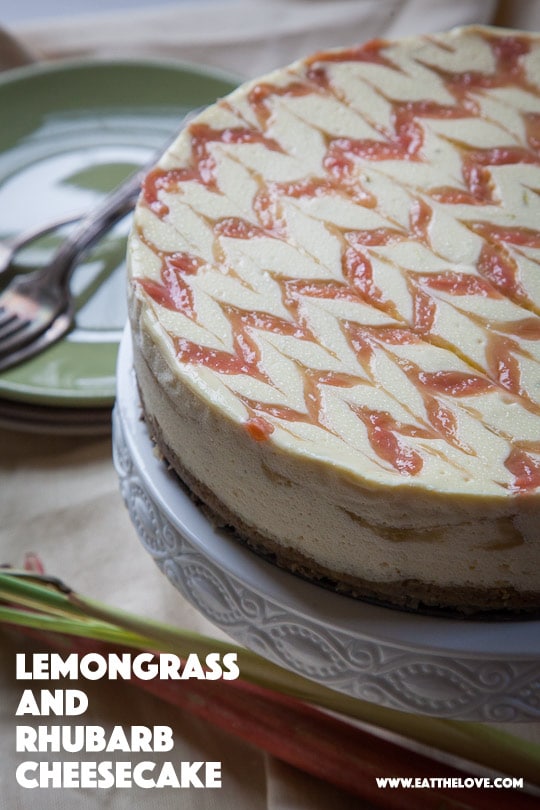 About 15 years ago my brother called me up asking for a favor. He had moved from Missouri to do a fellowship at UC Davis in forensic psychology. It was suppose to be a two-year temporary move, after which he was planning on moving back to Missouri to be with his then girlfriend (now wife). At the end of the fellowship, he had a graduation dinner with his advisor and his girlfriend was scheduled to fly out to join him. Disaster struck when his girlfriend’s car broke down on the way to the airport (she lived in the middle of the state, about 2 hours away from the closest major airport). She couldn’t make it to his dinner. 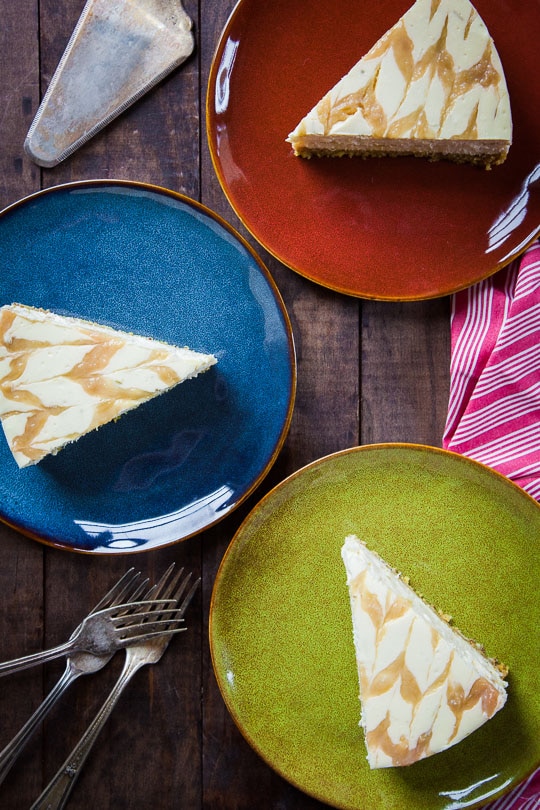 My brother called me up last minute and told me he had plans at a fancy restaurant but since she wasn’t able to make it, could I come in her place? The restaurant was a little farther away, in Napa, so I might have to borrow or rent a car. But he didn’t want to just bring anyone since it was a fancy restaurant and a graduation celebration. I would have to figure out what to wear a suit as well as there was a dress code at the restaurant. I said I was happy to join him. What was the restaurant? He replied back “I think it’s called French Laundry? Something like that.” I told him I’d go with him but he owed me big time for the last minute filling in. 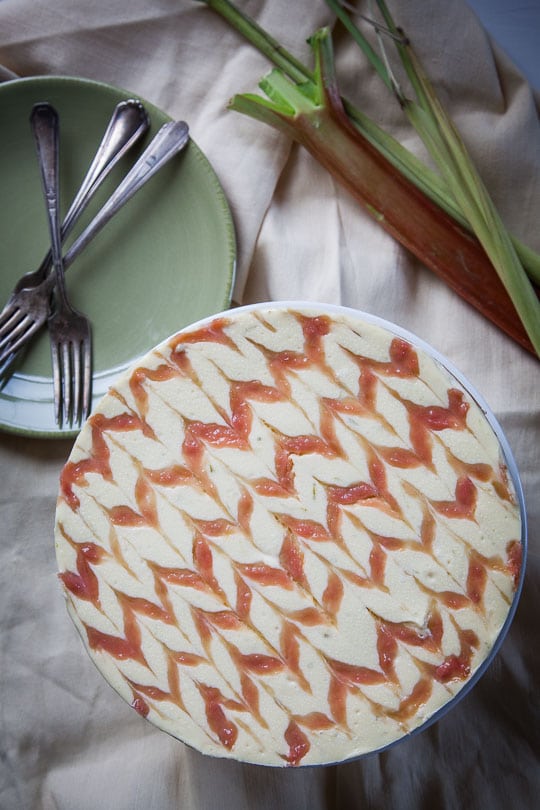 Of course, if it isn’t evident, my brother knows very little about food. I went and enjoyed myself immensely, knowing I was eating at one of the best restaurants in the country. And though the entire meal was memorable, I specifically remember that one of the dessert courses was a lemongrass panna cotta, something I had never had before, never even thought existed. So when my friend Peter asked me to make a dessert for his Passover dinner, I decided to take inspiration from that meal from so long ago and make a lemongrass and rhubarb cheesecake. Like that fancy restaurant in Napa, it didn’t disappoint. 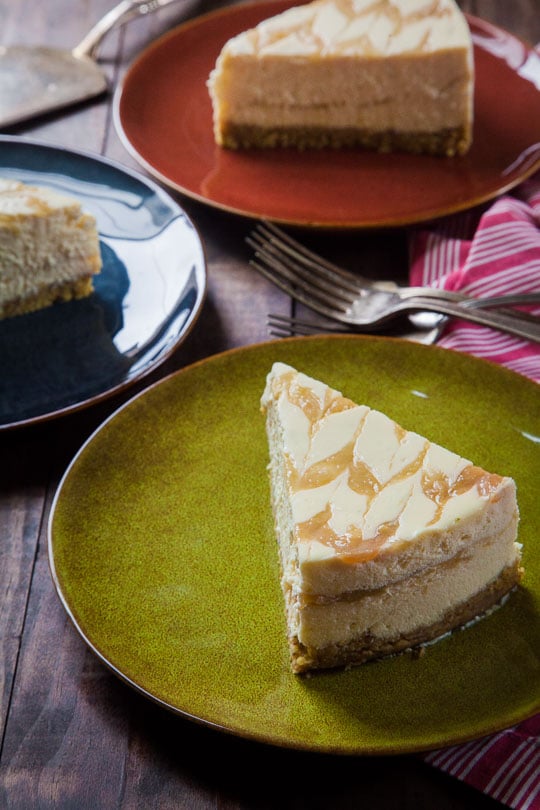 If you’ve never used lemongrass before, it may seem daunting. Long and woody, lemongrass seems like an odd thing to use in a dessert. I infuse milk with chopped lemongrass and then use it in the cheesecake. The result is a delicate grassy citrus creamy cheesecake that marries well with the tart rhubarb. For a more pronounced lemongrass flavor, make the infused milk the day before, and let it sit overnight in the refrigerator. This original recipe was designed to be Kosher for Passover (but not pareve) but I’ve also included more common ingredients for everyone who wants to bake it anytime or for those who aren’t following a KoP diet. 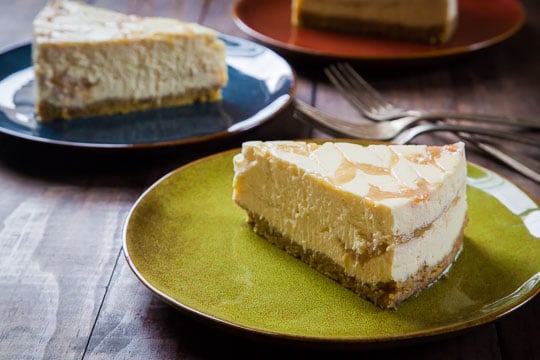 Directions
1. Place the lemongrass and milk in a small saucepan and heat until bubbles start to form on the side of the pan. Cover and remove from heat. Let the lemongrass steep for 30 minutes at room temperature or up to 8 hours overnight in a fridge.

2. Once the milk has steep, preheat the oven to 350ºF. Lightly spray a 9-inch springform pan with cooking oil. Place two large sheets of aluminum foil on a table, crisscrossing each other. Place the springform pan in the middle of the foil and then wrap the foil up and around the side of the pan.

3. Make the crust by placing the pistachios in a food processor or blender. Pulse until the nuts are broken down into small bits. Add the cracker crumbs, sugar and salt into the processor or blender bowl. Pulse a few times to blend, then drizzle the butter into the dry ingredients with the machine on. Stop when the crust starts to clump up. Dump into the prepared pan and press the crumbs with your finger (or the back of a spoon) evenly into the bottom. Bake in the oven until the crust starts to smell fragrant, about 8 to 10 minutes. Remove from the oven and let cool on a wire rack. Reduce the oven temperature to 300ºF.

4. Make the rhubarb filling by placing the rhubarb, water and 2 tablespoons of the sugar in small saucepan. Cook over medium heat until the rhubarb starts to fall apart, about 5 to 8 minutes. Add the remaining sugar, grated ginger and tapioca starch or cornstarch. Return to heat and cook until thickened, about 2 minutes. Remove from heat and set aside to cool.

5. Make the lemongrass filling by placing the cream cheese, sugar and lime zest in the bowl of a stand mixer fitted with a paddle attachment. Strain out the lemongrass from the milk into a glass measuring cup, discarding the solids. You should have 2/3 cup. If you have less, add a little regular milk until you have enough. If you have too much, discard the remaining milk. Mix the cream cheese together with the other ingredients until fluffy, about 1 to 2 minutes. Add the eggs, one at a time, waiting for each to incorporate before adding the next one. Add the lime juice and beat until incorporated.

9. Serve directly from the refrigerator or let it sit at room temperature for an hour before serving for a less firm texture.

This blog currently has a partnership with Amazon.com in their affiliate program, which gives me a small percentage of sales if you buy a product through a link on my blog. I only recommend products (usually cookbooks, but sometimes ingredients or equipment) that I use and love, not for any compensation unless otherwise noted in the blog post. If you are uncomfortable with this, feel free to go directly to Amazon.com and search for the book or item of your choice.
466shares