Inspired by the American boilermaker-like drink made with Guinness, Irish whiskey and Irish Cream, this Irish Whiskey Cream Cake is rich, moist and densely chocolate filled! (Jump directly to the recipe.) 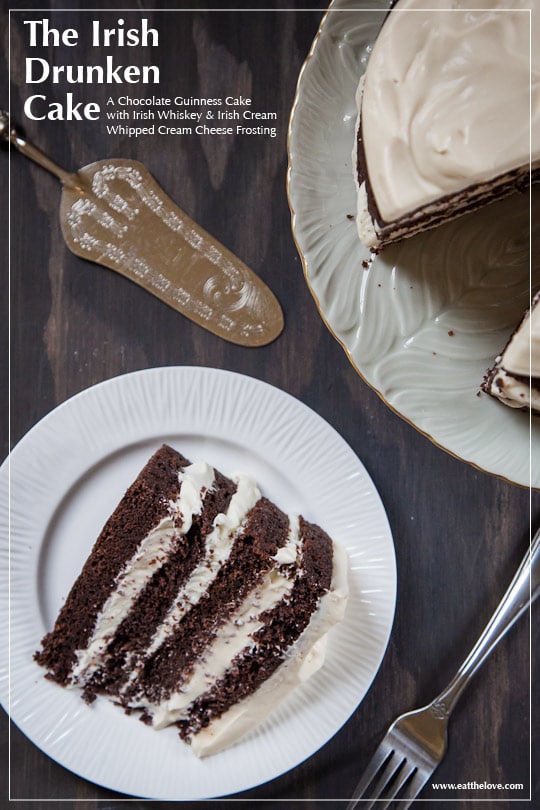 [Editor’s note: Several people have commented that they were offended by the name of this recipe. The drink The Irish Car Bomb is an American drink create in 1979 that refers to the dropping of a shot of Irish cream & Irish whiskey into a glass of Guinness. It is similar to a boilermaker drink, with the term “car bomb” referring to the dropping of the shot glass into the beer glass, otherwise known as a bomb shot. I truly apologize if this name offends anyone and I have subsequently changed the name of the recipe]

“I think I’ve seen Jesus…” blasphemed a friend of mine, after he took a bite of my Irish Drunken Cake. Apparently the combination of Guinness, Irish Whiskey and Irish Cream combined in a layer cake form was a religious experience to him. That or he had run out of accolades for my desserts. Either way, I was happy to take the compliment, though I’m sure my more sensitive friends would be offended. Thankfully they were out of earshot when he said it. 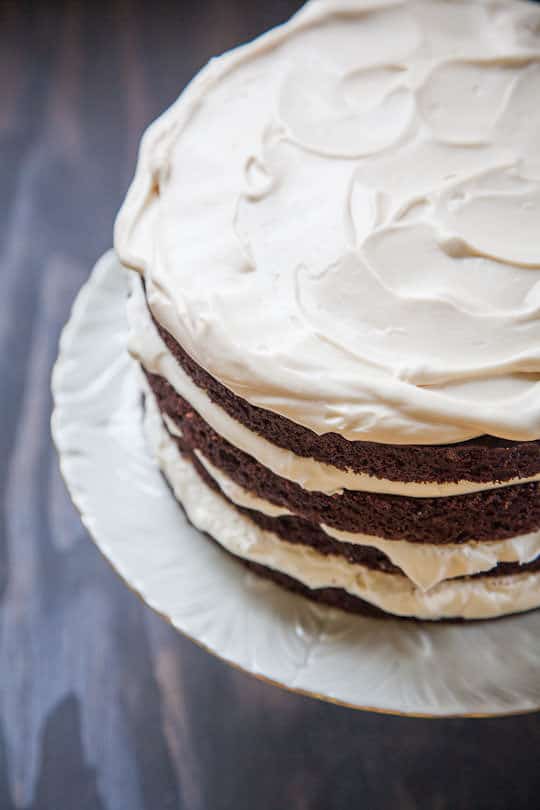 Now, I’m not much of a drinking, something that perplexed many of friend and co-worker of mine. One Irish co-worker of mine at a temp job when I first moved to San Francisco was utterly confused when I mentioned to her that I didn’t really drink. “So what do you do for fun?” There was absolutely no irony in her question at all, as she was genuinely curious as to what I did for recreation. It seems the entire Irish culture revolves around going to the pub. 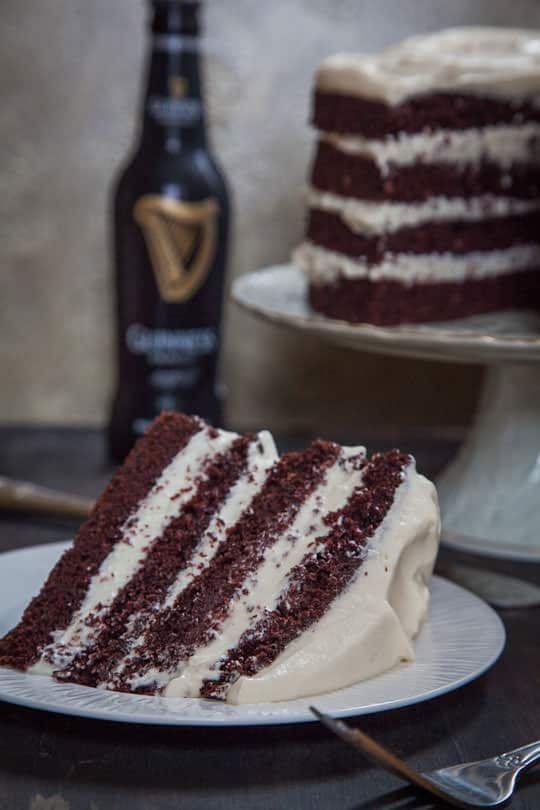 Now, if I could have found a drink like the Irish Car Bomb perhaps my life would have been different. Not that I could have ordered it with my Irish co-worker, as it’s strictly an American invention (try ordering the drink in Ireland, and you’ll either offend someone or just confuse the bartender). Of course I like those flavors even more in cake form, with the Guinness adding depth and moisture to the chocolate cake, while Irish Cream and Irish Whiskey laden whipped cream cheese frosting added just the right sweet tang to each fluffy frosting layer. Apparently my friend agreed. He had another slice immediately after finishing his first one. 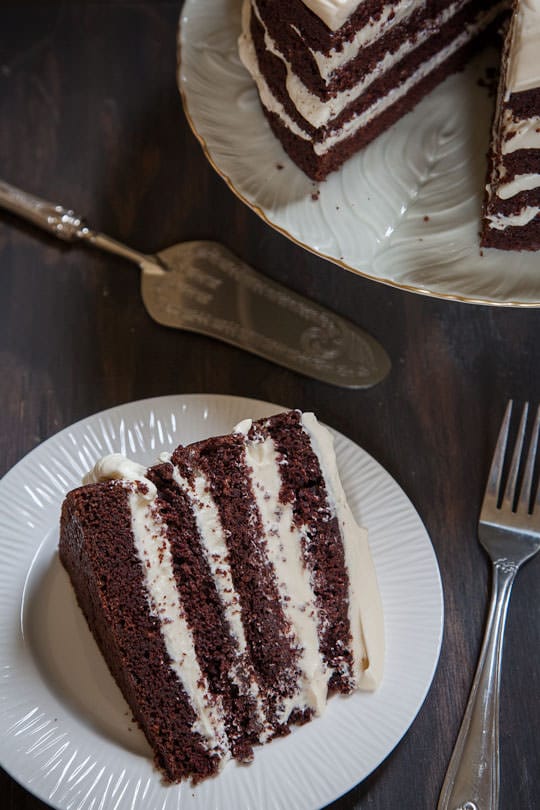 Nigella Lawson popularized the Guinness Chocolate Cake but this Irish Drunken Cake takes it to a new level. I split the cake into four layers (don’t worry I give you instructions with photos on how to do that painlessly) but if you’re feeling lazy, just leave it as two layers and only make half the frosting. But trust me, this light and fluffy frosting is fabulous and you’ll want as much as possible of it so do try to split the cake layers if you can. It’s not too hard!

Radically adapted from a Simply Recipes which in turn was adapted from a Nigella Lawson recipe. Inspired by a recipe from First Prize Pies by Allison Kave. 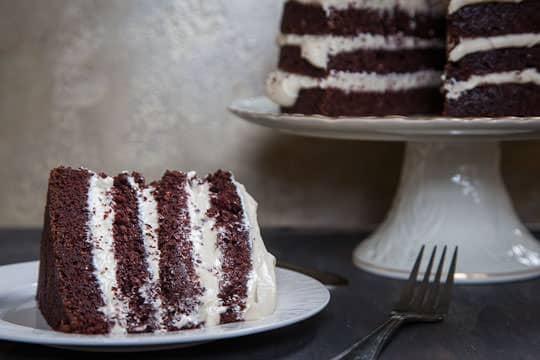 Directions
1. Preheat the oven to 350˚F. Spray two 9-inch cake pans with cooking oil, then line the bottom of each pan with a round of parchment paper.

2. Place the flour, baking powder, baking soda and sea salt in a medium bowl. Using a balloon whisk, stir the dry ingredients together vigorously until well blended. Place the butter in a large pot on the stove and turn the heat to medium high. Cook, stirring constantly, until the butter is melted. Turn the heat off and pour the Guinness into the butter, stirring to blend with a whisk. Add the cocoa powder and both sugars to the pot and whisk until blended in.

3. Measure the Greek-style yogurt into a glass measuring cup and add the eggs and Irish whiskey to it. Stir until the eggs and whiskey are incorporated and the entire mixture is smooth. Add the yogurt and eggs mixture to the pot with the chocolate Guinness mixture. Whisk to incorporate. Add all the dry ingredients to the batter and whisk until incorporated. Divide between the two prepared cake pans (if you have a scale, it’s roughly 750 grams of batter per pan). Bake in the oven for 30-35 minutes or until the sides of the cake pull away from the pan and a toothpick inserted in the middle of each cake comes out clean. Let cool in the pan for 15 minutes before inverting and letting cool on a wire rack completely to room temperature. 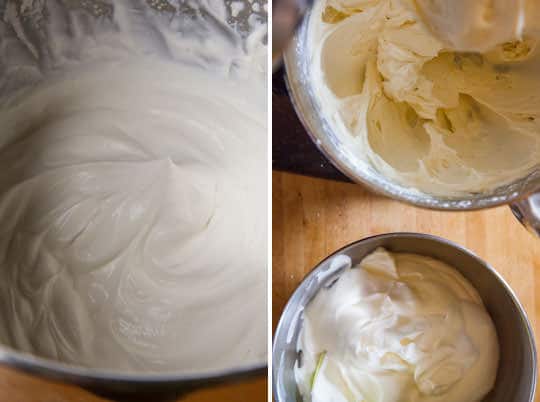 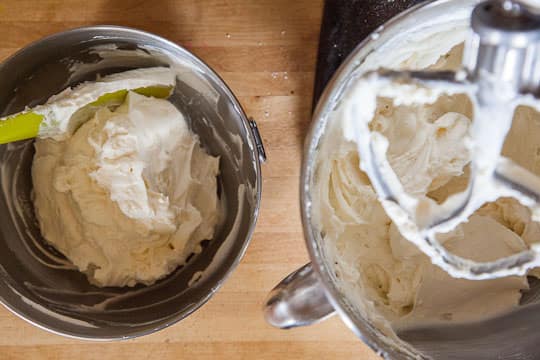 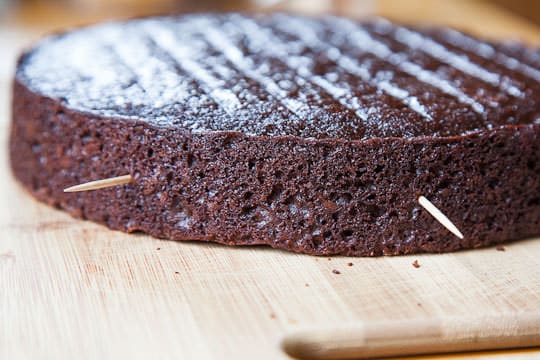 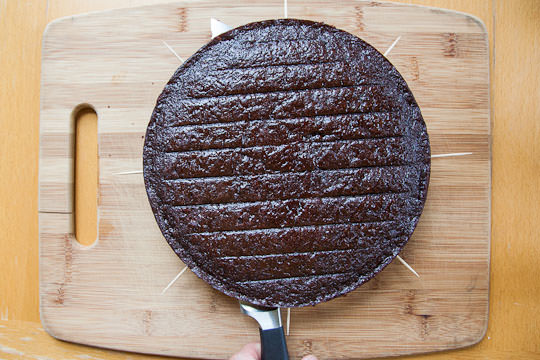 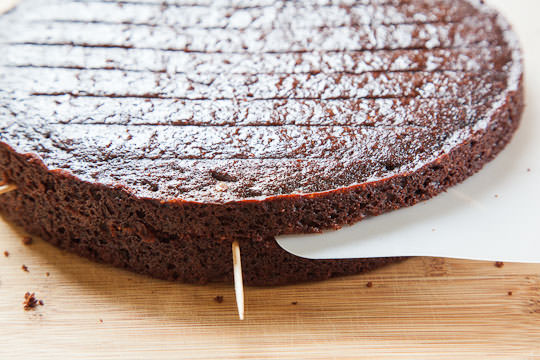 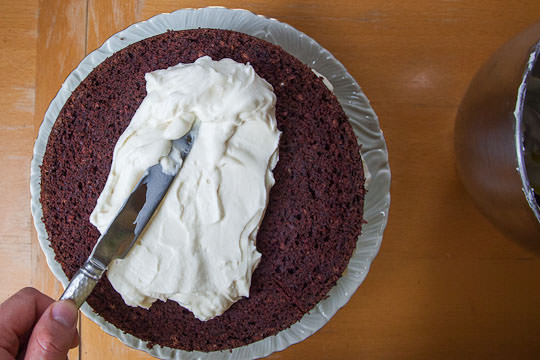 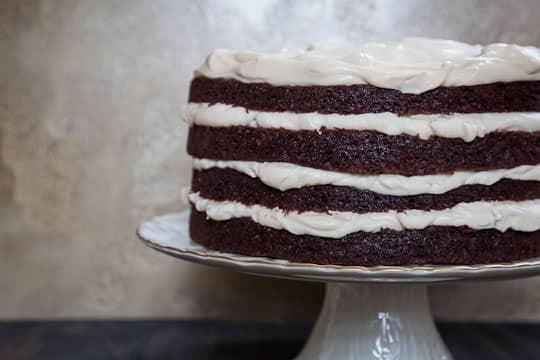 Makes 1 cake, serves 12-16 people, depending on how thin you slice the cake.

This blog currently has a partnership with Amazon.com in their affiliate program, which gives me a small percentage of sales if you buy a product through a link on my blog. I only recommend products (usually cookbooks, but sometimes ingredients or equipment) that I use and love, not for any compensation unless otherwise noted in the blog post. If you are uncomfortable with this, feel free to go directly to Amazon.com and search for the book or item of your choice.
7706shares