You are here: Home / side dish / Hummus, Gay Carrots and the Best Speech of the Night

This rustic hummus is made completely from scratch, including the tahini sesame paste. Totally worth the effort! 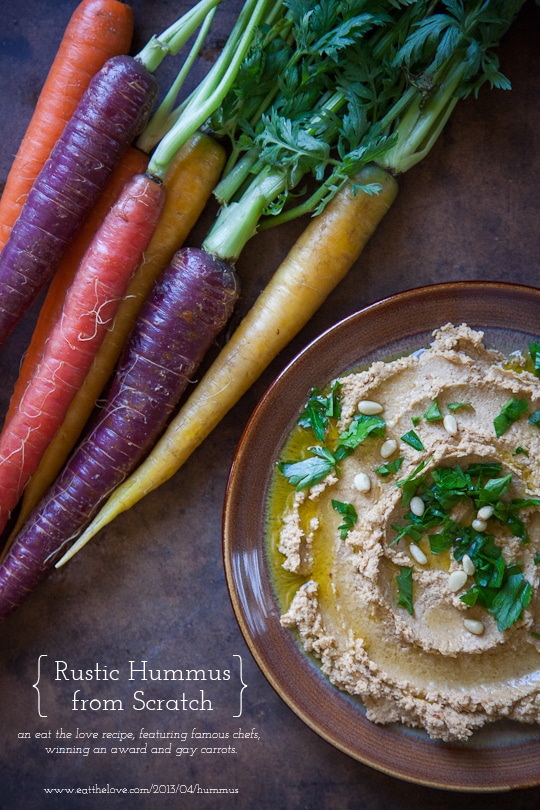 As I was led back to the VIP green room, behind the imposing black curtains that kept the riff raff out, the first person I saw immediately made eye contact with me. He glanced down to my hands, which tightly clutched the gold gilded black folder that housed my award certificate, smiled gently and nodded his head at me. “Congratulations!” he murmured, as I faintly nodded my head back to him and replied back with a muted thank you. Though I’m sure Chef Thomas Keller of French Laundry said it to all who passed the curtain, the evening didn’t seem to get any more surreal as I walked past him to have some champagne handed to me and my picture taken for posterity. I had just won the IACP photography contest award for Best in Show and I had homemade hummus to thank for it.

I’m not comfortable with praise, never have been. Time and again people tell me that I need to just say a simple “Thank you” when someone compliments me, but I don’t know how to do that. Instead I start apologizing or explaining away the praise, which is never graceful. And even when I know that I should just say a simple “Thank you” for an important award, on a brightly lit stage, in front of the foodinistas of the culinary world, right after Alice Waters had won a Lifetime Achievement award, I say something like “Thank you. Please hire me. I’m a freelancer.” instead. Yes, that is what I blurted out, as I ran off the stage and behind the black curtain where I met Thomas Keller. 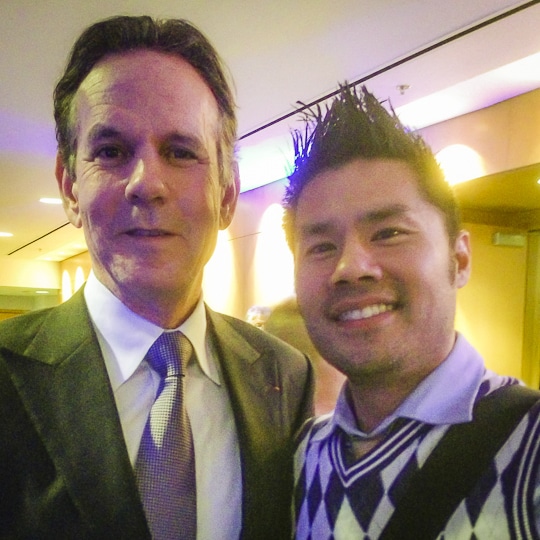 And run away I did. After taking my photo for IACP, I lingered for only two minutes in the VIP room (which, incidentally, is not painted green) before turning around and walking back out to the audience, sitting in my seat next to my friends, slightly numb at what just happened, as they all whispered their congratulations me. I immediately texted my partner AJ about how I just won the IACP photo contest and it freaked me out so much that I had to leave the VIP room. He texted back that I need to go back there and meet people. So with a deep breathe, I did.

Alice Waters was sitting against the wall as I walked back in chatting away with someone and though I wanted to go up and say hi to her, I started talking to my friend Judy who lives in Italy and who I adore. I talked to Igancio Urquiza, a brilliant Mexican food photographer who said that we should work together (“yes, please” was my obvious response) as well as Mark Boughton the winner of the people’s choice award for the photograph contest. Mark and I schemed on pitching a photo workshop for the next IACP conference, and I thought to myself, how did I get here? How did this happen?

And then I remember my winning photograph and how that was the reason I was now in the non-green green room. The theme of the photo contest, open to any IACP member, was “Real Food in a Virtual World” and I remember sorting through all my photos on my hard drive, trying to find just the right photo to capture that theme. In the end, I realized that I needed to take a new one if I had any chance of winning. And just as I turned to AJ to tell him that I need to take a photo for the contest, I saw him reaching into fridge and pulling out our hummus. The hummus that I make from scratch in huge batches because AJ loves it so much. And, along with the hummus, he pulled out the rainbow carrots that I buy five bundles at a time, which is what we eat our hummus with. We call the carrots our “gay carrots” for reasons obvious to anyone that has been to a gay pride parade. Our little inside joke, those gay carrots were exactly what I need to photograph for my entry into the competition. Right then and there, I knew exactly how to take the perfect photo for that contest theme. 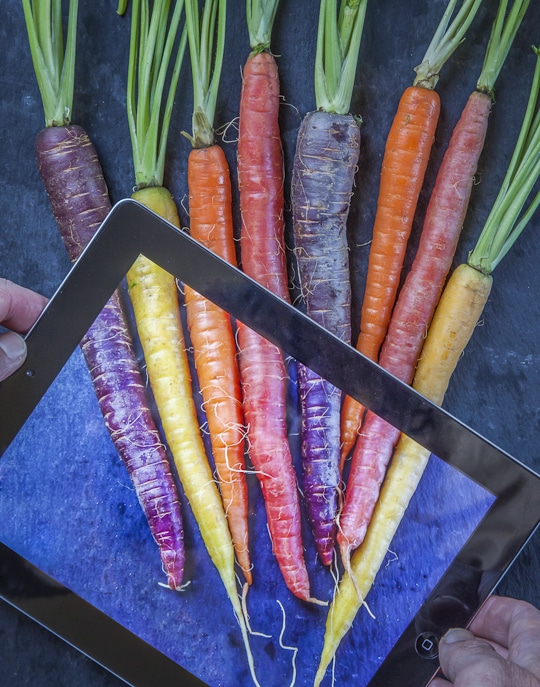 I never did get a chance to talk to Alice Waters, as she left before I could say hello, though it wasn’t because I was too scared. Perhaps it was the champagne or the fact that everyone was so nice to me, but any fear I had slowly slipped away. The reception afterwards had a slew of people coming up and congratulating me, including luminary pastry folks like Alice Medrich, Emily Luchetti and Nancy Baggett. I shook hands with person after person, as they all told me that they liked my acceptance speech. The best speech of the night, said several people to me, laughing as they grabbed my hand to shake it. One IACP board member repeatedly gave me a high five every time I saw him. I love that man.

While it’s true that I may be uncomfortable with praise, I hope never to truly become comfortable with it. I want to be taken off guard, surprised at life turns and have my heart race as I hear someone single me out because of something I did or achieve. I want to get excited when I land that awesome freelance job and get slightly nervous when I have to do a project that pushes me outside my comfort zone. If it wasn’t for that tightening of the gut and the nervous energy of walking up to that stage, I might never have had told everyone in the audience that I was available for hire as a freelancer. I may never have given the best acceptance speech of the night.

Of course, I still haven’t gotten a single job offer since the award ceremony. 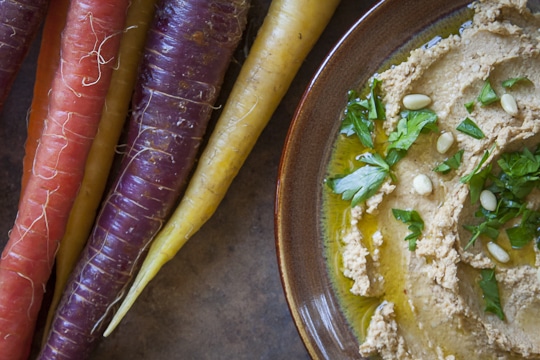 Most hummus recipes call for canned garbanzo beans and tahini from a jar. I find the best hummus is made from dried chickpea (which is also cheaper) and brown sesame seeds (tahini is ground sesame seed paste). My recipe is radically adapted from Jerusalem, which happens to have won the IACP cookbook of the year award at the same time I won an award. Yotam Ottolenghi’s book is gorgeous and his hummus recipe uses dried chickpeas but he uses tahini in his recipe. I find brown sesame seeds more economical as I buy it in bulk (and apparently it’s healthier too), but keep in mind that the final hummus won’t be as silky smooth as one made with tahini. I like my hummus a little more rustic and homemade but if you really want a super smooth hummus, use 1 cup of tahini and leave out the sesame seeds, sesame oil and olive oil.

Because soaking and cooking the chickpeas is the most time consuming part of the recipe, I usually double the beans, water and baking soda and then use half the cooked beans for my hummus and freeze the other half afterwards in a quart ziplock bag. Defrosting the beans in the fridge the night before means I can whip up a batch of hummus super fast without having to soak or cook them. You’ll also note that I use a lot of spices in my hummus. Feel free to experiment with your own spices, or spice blends like Duqqa, Baharat or Ras el hanout. Hummus is a pretty blank slate and you can customize it however you like. 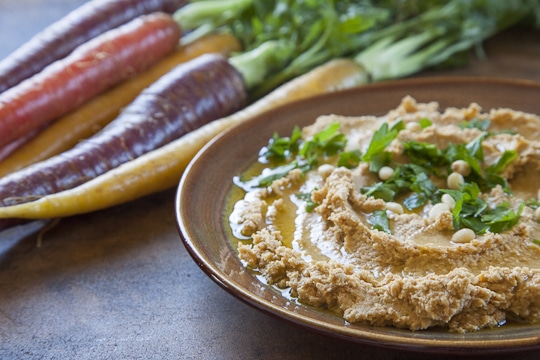 Directions
1. Place the dried chickpeas in a large bowl and cover with at least twice as much water as beans. Leave for 8 to 12 hours (overnight). Drain the beans and place in a large stockpot. Sprinkle with the baking soda and cook on medium heat for three minutes, stirring constantly. Add the tap water and bring to a boil. Reduce heat to medium and cook for 20-30 minutes, skimming the top of the water to remove foam. Cook until the beans are soft and squish between your fingers but aren’t totally soggy. Drain. You should have about 2 2/3 cup (600 g) of beans.

3. Add the drained beans, salt and seasonings and continue to process until a paste forms, making to sure to occasionally scrape down the sides if you need to. Add more water if you need to thin the hummus down (keep in mind that the hummus will firm up a bit in the fridge as it chills and the spices will dull down if the hummus is served cold).

4. Scoop the hummus out of the processor, into a large container of your choice and either cover with plastic wrap on the surface of the hummus to keep it from drying out or drizzle with olive oil over the top. Take out of the fridge about 30 minutes before you serve to company. Serve with gay carrots or any other non-homophobic vegetables of your choice.

Makes about a one quart of hummus.

This blog currently has a partnership with Amazon.com in their affiliate program, which gives me a small percentage of sales if you buy a product through a link on my blog. I only recommend products (usually cookbooks, but sometimes ingredients or equipment) that I use and love, not for any compensation unless otherwise noted in the blog post. If you are uncomfortable with this, feel free to go directly to Amazon.com and search for the book or item of your choice.
1489shares