Previously on Eat the Love [cue hilarious intro theme song to the situation comedy that is this blog]: Irvin was contacted by Alexia Foods to help create a new French fry flavor [quick scene of Irvin making different French fry flavors in a sassy manner on the floor of a factory assembly line, ala the intro to Laverne & Shirley]. Their “Reinvent a Classic” contest has 20+ different bloggers all working in a friendly competition to come up with the best one [cue same scene in the factory, but it goes wide angle and you see 20 different bloggers frantically working in the assembly line and all tasting fries at the same time in a manner closer to the classic I Love Lucy chocolate conveyor belt scene]. Irvin contemplated whether to go the sweet potato route or the russet potato route with his fries [quirky scene of Irvin looking back and forth between the russet potato convey belt and the sweet potato convey belt in the assembly line looking adorably perplexed]. Irvin decides to throw a tasting party where he invites a bunch of people over to eat eight different French fry flavors [zoomed out bird’s eye view of eight conveyor belts with eight different fry flavors as they go by quickly]. He blogs about four of them, the ones that were ranked lowest of the eight, sharing one of the recipes that he loves, even if his friends weren’t as enthusiastic, and then alludes to the four top ones in a future post [play dramatic music]… 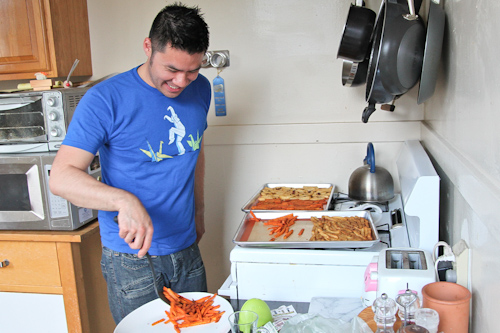 So now that you’re totally caught up, here’s the deal. I have four flavors that my friends loved at the French Fry Tasting Party. I know which one is my personal favorite but I want to know what you guys think of them as well, so leave a comment and let me know your thoughts on them…. 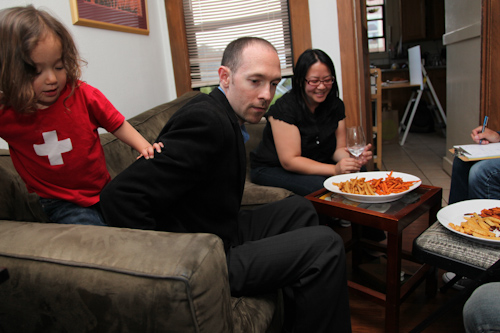 The Tandoori Spiced French Fry ranked a solid 8 out of 10 with my friends. With a huge number of spices involved, it probably isn’t the easiest fry to mass produce, but when is anything amazing ever easy? Garlic, cayenne pepper, black pepper, lemon zest, ginger, ground coriander seeds, turmeric, cumin, nutmeg, cloves, paprika, cardamom and sea salt all went into making these fries. My friends claimed that it would be even better if I had made a mango chutney as a dipping sauce, but I forced them all to eat them without any sauces to get a true read on the flavor of the fries. 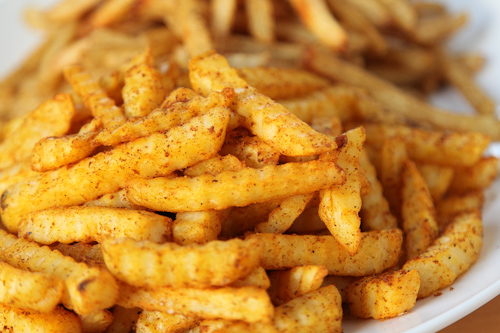 Ranking a slightly higher 8.5 out of 10 (don’t you love how my friends went to the .5 decimal place to rate these?) the Jamaican Jerk French Fry was a pretty big hit. Some people claimed that they could sit down and eat a huge plate of them all by themselves. With onion, all spice, cayenne pepper, ginger, cinnamon, black pepper, brown sugar, garlic and kosher salt they likened the fries to a really good BBQ chip. 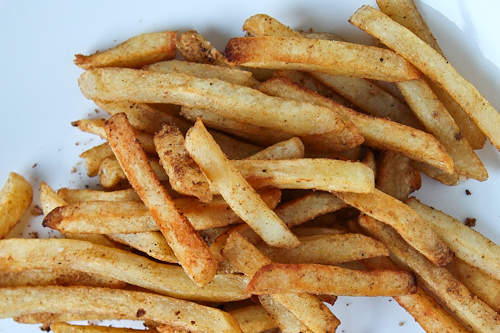 Other than my friend Felisa, who hated these fries, the Exotic Mushroom French Fry ranked an amazing 9 out of 10 amongst my friends. Felisa happens to hate truffles, and these fries have white truffle salt, porcini powder, black pepper, ground sage and a touch of olive oil. Of course, Felisa also said she hates sage, so she ranked these as a 2 (that was being generous she said) so technically these fries are considered “divisive” but everyone else absolutely loved these, and AJ couldn’t help but go back to them again and again, ignoring the rest of my fries and eating these ones. My friend Glenn thought they were excellent and said they reminded him of the fries he ate at the Four Seasons in Atlanta. He suggested I serve them with a dirty Pinot Noir glass of wine. I’ll keep that in mind next time I make a batch. 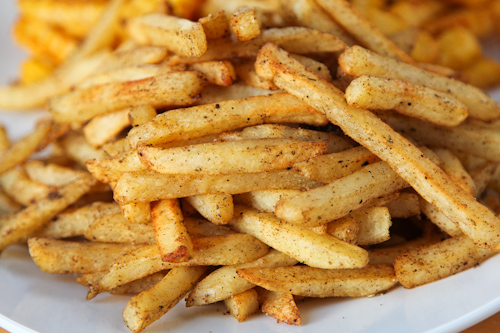 The highest ranked fry in the bunch, with a solid 9+ (don’t ask me why they wrote 9+ and not 9.5 in the rankings, I wasn’t involved with the ranking system) was the Applewood Smoked Bacon French fry. I mean how can you go wrong with bacon? In some ways, the taste test was really stacked in it’s favor, as everything tastes better with bacon. But with homemade cured bacon, applewood smoked sea salt, onion, cracked mixed peppercorns, and a light tossing of rendered bacon fat, the fries were a total winner. Their only complaint is that the bacon didn’t quite stick to the fries, but I think that would be solved if I changed the fries to a waffle cut and smaller bits of bacon (the homemade bacon I had was hard to cut into smaller pieces). 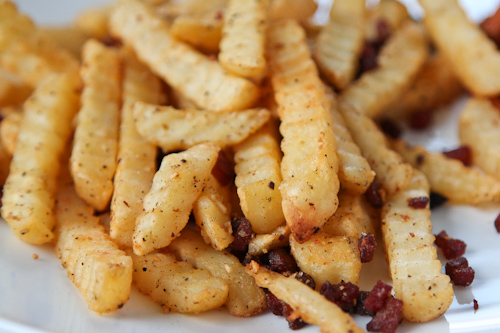 So what do you all think? I’m still tweaking some of these recipes, so the final recipe won’t be exactly the same as what is listed here, but each of these are the base of what I’m going with. What recipe do you think is a winner and which one would you like to see on the shelf at the supermarket? Would you want to eat a Tandoori Spiced Fry or do you think an all American Smoked Applewood Bacon French fry is the way to go? Does Jamaican Jerk sounds like a winner, or do you think the world is ready for a commercially available Exotic Mushroom Fry with white truffle salt? Lemme know and wish me luck on my submission to the Alexia Foods “Reinvent a Classic” contest! 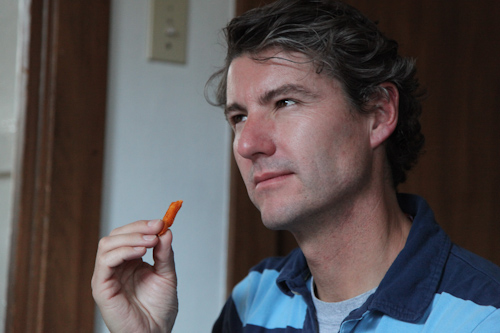 Fancypants Glenn contemplates the flavor of these fries. 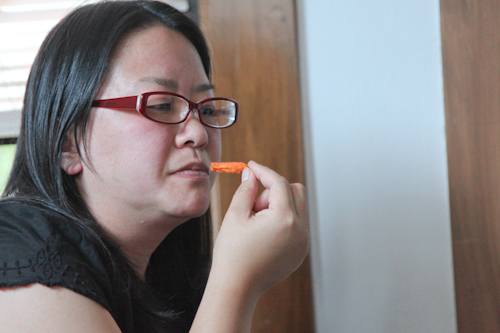 Truffle hating Felisa wonders how to rate these fries.

[This is a sponsored post. I did receive compensation from Alexia Foods to write about developing a new fry flavor, but all opinions are my own. For a full disclosure statement about my sponsored post policy, please visit my FAQ page]

This blog currently has a partnership with Amazon.com in their affiliate program, which gives me a small percentage of sales if you buy a product through a link on my blog. I only recommend products (usually cookbooks, but sometimes ingredients or equipment) that I use and love, not for any compensation unless otherwise noted in the blog post. If you are uncomfortable with this, feel free to go directly to Amazon.com and search for the book or item of your choice.
10shares