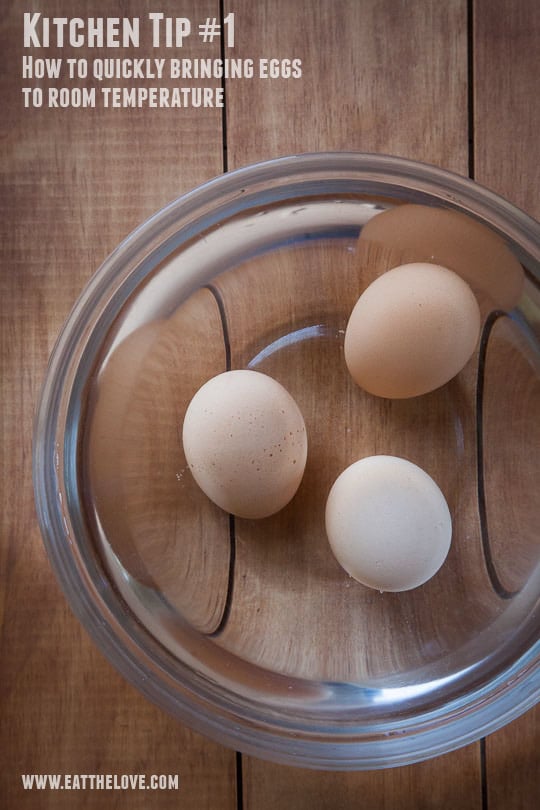 So lets have a little chit-chat about eggs – specifically room temperature eggs. There are lot of recipes that specify room temperature eggs in their ingredients list and most people tell me that they don’t ever remember to take their eggs out beforehand to warm up. Here’s the truth – most recipes won’t be affected much by cold eggs. Yep, it’s not super important if you are making cookies, brownies and most cakes. The recipes that DO matter though are the ones where the eggs need to be whipped to lighten the batter. Desserts like chiffon, angel food and pound cakes rely on the air that is trapped when you whip the eggs and warmer eggs whip up bigger and fluffier than cold eggs. So if the recipe calls for you to either whip the egg whites and then fold it them the batter or to add the eggs and beat the batter until it’s fluffy than bring your eggs to room temperature.

But who remembers to pull the eggs out ahead of time to warm up? I don’t. So what I do is first pull the eggs I need and put them in a bowl with warm to hot tap water. The temperature of the water depends on how many eggs I need warmed up. If it’s only one egg, I’ll use warm-to-the-touch water. If it’s four eggs, I’ll use the hot water from the tap because it’ll take more heat to warm up all the eggs. Never use boiling water, just pull the water from the tap. Within five to ten minutes (usually by the time you need the use the eggs in the batter) the eggs should have warmed up. Easy right?

Bonus tip, separating egg yolks and egg whites is much easier when the egg is cold. If the recipe calls for you to add egg yolks at one point in the batter and then whip the egg white separately to fold in later, I will separate the eggs while cold. Then I’ll often add the egg yolk cold to the batter and place the egg whites in a Ziplock sandwich bag (use a cheap thin sandwich bag, not a heavy duty frozen Ziplock bag, as it’s much thicker). I’ll then place the sealed Ziplock bag in a warm bowl of water and let the egg whites warm up before whipping them. Just snip the corner of the bag and squeeze the warmed egg whites into your bowl to whip!

This blog currently has a partnership with Amazon.com in their affiliate program, which gives me a small percentage of sales if you buy a product through a link on my blog. I only recommend products (usually cookbooks, but sometimes ingredients or equipment) that I use and love, not for any compensation unless otherwise noted in the blog post. If you are uncomfortable with this, feel free to go directly to Amazon.com and search for the book or item of your choice.
360shares