An easy infusion of tea in scalded milk, makes this Earl Grey Blueberry Coffee Cake incredibly delicious and a snap to make. (Jump directly to the recipe.) 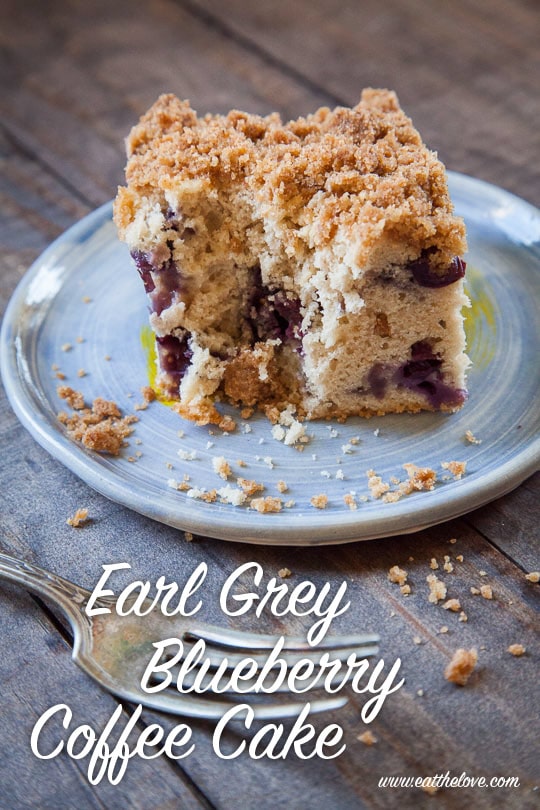 I have a new obsession and its name is Snapchat. Part of me wants to curl up in a ball and hide under a rock when I admit that. I want to call it “a guilty pleasure” but the reality is, I feel no guilt in using it. In fact, it’s reinvigorated my love of social media because it’s so refreshing to not have to deal with the insanity of the highly curated life and social media “pressure” of trying to get comments and likes on pretty much every other social media channel everywhere. Snapchat doesn’t allow for public “likes” or comments so anytime I share things on Snapchat, no one else knows if I get 10 views or 10,000 views! I love that. No societal pressure to perform, instead I get to just share whatever I want. And yes it’s infuriating to use because it’s basically designed for 13 year-olds. And I am 40-something-year-old that is feeling very geriatric lately (I’m totally doing that thing with the phone where I pull it back and forth from my eyes to try to get it into focus). But it’s exactly because of Snapchat that I ended up making this Earl Grey Blueberry Coffee Cake. And I have absolutely no guilt or regrets about this coffee cake. 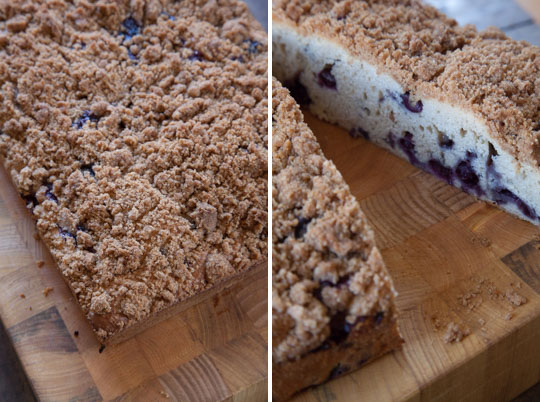 It started out when I admitted to my Snapchat pals that my partner AJ was out of town and all my bad habits that I usually repress to keep from annoying him come flaring back up. This includes things like letting the dishes pile up in the sink, leaving the apartment a hot mess without picking anything up, and eating like a college student. Yes, as a food blogger, this is probably the worse admission. I order ton of cheap Chinese carryout and then gorge on it. It’s not pretty but I can’t help myself. 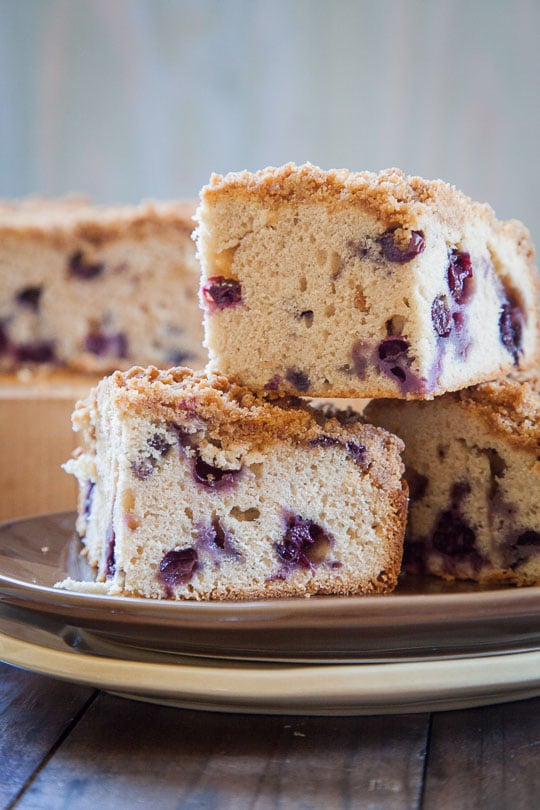 But I also go crazy at the grocery store! AJ basically functions like my built-in self-control. I’ll be at the grocery store, reaching for a donut, and he’ll be all “Do you REALLY need that donut?” No. I don’t. No one REALLY needs a donut. Or I’ll pile the grocery cart full of potato chips (because they’re on sale!) and he’ll be “we really don’t have room for 12 bags of chips. Maybe buy 3?” and I’ll reluctantly put back 9 bags. But the worse is the fruit. I have a habit of going crazy and buying TONS of fruit when he’s gone (because it looks so fabulous at the grocery store) only to find that I either have a ton of fruit in the fridge already, or that I overbought and can’t eat it fast enough. And this is what happened when I found myself buying another package of blueberries at the store, only to find a box of unopened blueberries in the fridge. Gah! 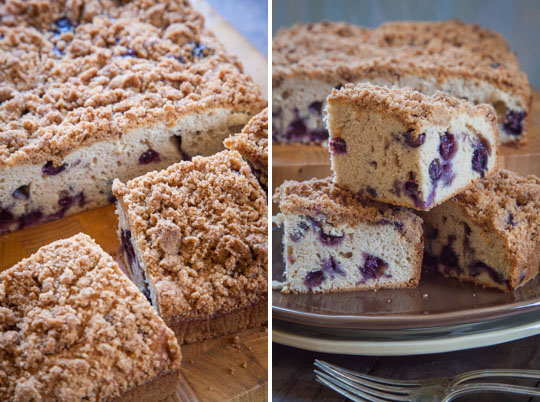 So here’s the thing. I COULD have just frozen the older blueberries. Which might be a good solution except that my freezer is pretty packed right now with goose stock that I just made (and yes I totally snapped me making stock — I told you I’m obsessed!). So I went on Snapchat and asked my friends what I should make? Should I make blueberry muffins or blueberry coffee cake? To my surprise more than twice as many people picked blueberry coffee cake over muffins (though one person told me I should have made cobbler…which came too late after I had decided I wanted cake or muffins). So thanks to Snapchat, I made this Earl Grey Blueberry Coffee Cake and it’s pretty damn fantastic. No guilt with this coffee cake or my new social media obsession. No guilt at all. 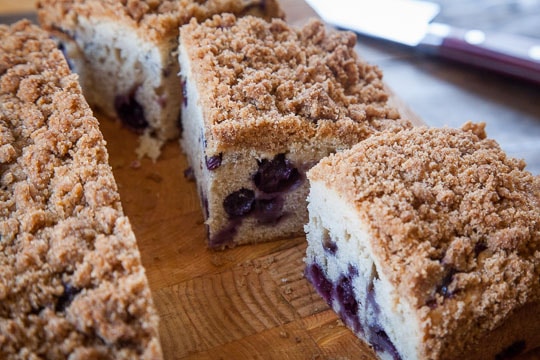 Earl Grey tea is black tea infused with Bergamot orange oils and its deep earthy and citrus aroma is just intoxicating. I infused the milk in this recipe with the tea, which is much easier to do than it sounds. If you aren’t a fan of Earl Grey, you can skip this step or just use a different tea (ginger or mint would be pretty fantastic as well). And if you follow me on Snapchat, you probably saw me making the recipe. If not, I’ve archived the video and you can watch it below! 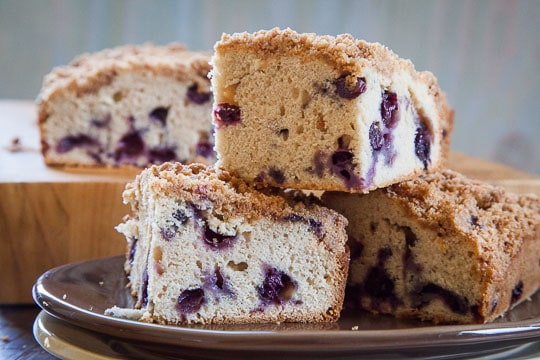 Directions
1. Place 1 cup of milk in a small saucepan and turn the heat to high. Heat the milk until tiny bubbles form on the side of the pan. Turn the heat off, place the bags of the Earl Grey tea in the pan with the hot milk and cover. Let steep for 30 minutes.

2. Meanwhile preheat the oven to 350ºF. Coat a 9 x 13 inch baking pan with cooking spray then line with parchment paper.

3. Place the butter, sugar, baking powder and salt in the bowl of stand mixer fitted with paddle attachment. Mix on medium speed for 2 minutes or until the butter is light and fluffy and clings to the side of the bowl. Add 1 egg and beat until incorporated. Repeat with the 2nd egg.

4. Measure out the Earl Grey tea into a liquid measuring cup. Gently squeeze the tea bags to get as much flavor out as possible. Add an additional 1 to 3 tablespoon of plain milk to bring it back to 1 cup of liquid (no matter how much you squeeze the tea bags, some milk will be absorbed.

7. Bake the cake for 50 to 60 minutes or until a toothpick inserted in the middle of the cake comes out clean. Makes sure to test a few different places as you may hit a blueberry. Let cool completely in the pan before lifting up with the parchment paper and moving the cake to a cutting board to cut and serve.

This blog currently has a partnership with Amazon.com in their affiliate program, which gives me a small percentage of sales if you buy a product through a link on my blog. I only recommend products (usually cookbooks, but sometimes ingredients or equipment) that I use and love, not for any compensation unless otherwise noted in the blog post. If you are uncomfortable with this, feel free to go directly to Amazon.com and search for the book or item of your choice.
284shares