Skip the “garbage” bowl and use a countertop “garbage” brown bag sack instead for convenience and ease! 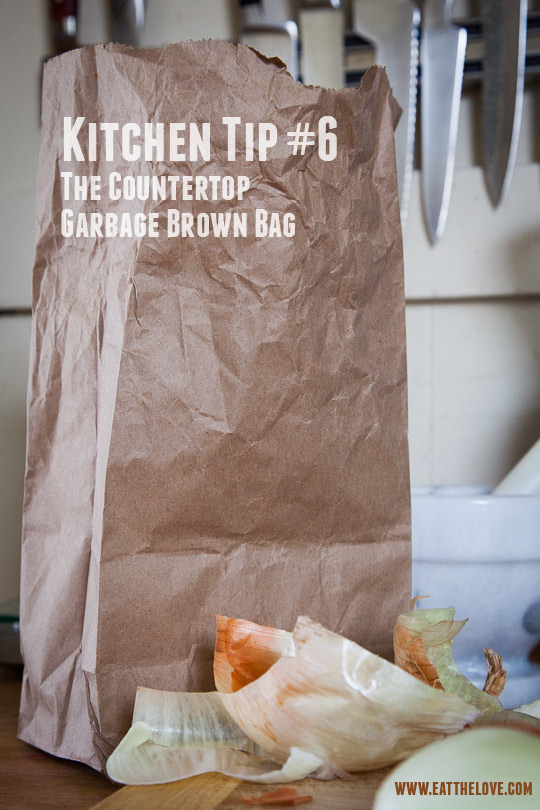 Here’s another fantastic kitchen tip from an ongoing series of kitchen tips that I do every now and then. This time I take on prepping! People often complain about prepping and the amount of scraps that it creates. A lot of folks will recommend that you keep a “garbage” bowl on the counter, where you can just throw peels, scraps and other non-wanted items into the bowl. This alleviates the need to keep walking back and forth to the trash can to clean up. But I have a better solution, the countertop garbage brown bag!

Here’s the deal. I shop a lot at grocery stores that give me the option of brown paper bags for produce instead of those plastic bags. If the produce is wet or too big (like a head of lettuce or chard greens) I try to use the brown paper bag. They’re the sort of bag that you used to bring your lunch in. After I use the produce, I used to recycle the bag. But then I had an epiphany! What if I just reused that bag for my scraps? 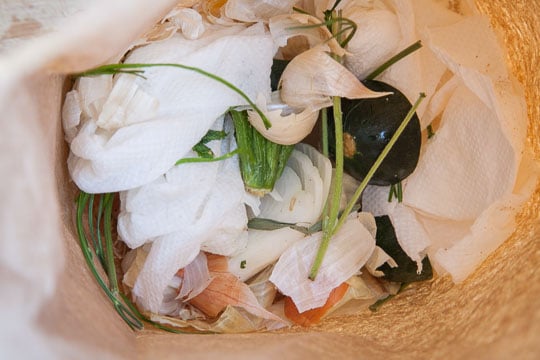 So now whenever I’m cooking and it involves a lot of prepping like peel onions or garlic, chop and peel carrots or have scraps like stems from herbs or egg shells, I put an old brown bag on the counter. Opened up, the flat bottom of the bag stands up by itself. The bag itself is fairly sturdy and thick enough that even wet scraps like egg shells and carrot peels won’t soak through and break the bag in the time you are prepping. Then when I want to throw away all my carrot peelings, I just pick them up and throw them in the bag, along with all the other scraps. Once I’m done, I just roll up the top of the bag and throw it in the compost bin. The brown paper bag is compostable! Of course, you can also just throw it away if you don’t compost.

It’s an easy solution to reusing a bag that would otherwise just get tossed AND it means there’s one less bowl to wash in the end. And it takes up less space than a garbage bowl because the physical footprint is smaller than an average mixing bowl. The vertical size means you can actually pack a lot into it. It’s a win-win situation. So the next time you are at the store and they give you the option to use brown paper bags instead of plastic in the fruit and vegetable section of the store, opt for the brown paper bag. Then reuse it later on when you do your prepping! 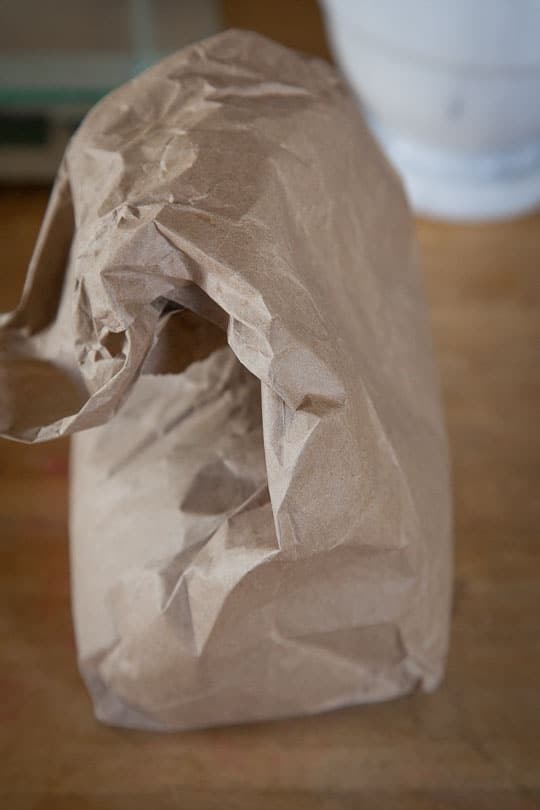 This blog currently has a partnership with Amazon.com in their affiliate program, which gives me a small percentage of sales if you buy a product through a link on my blog. I only recommend products (usually cookbooks, but sometimes ingredients or equipment) that I use and love, not for any compensation unless otherwise noted in the blog post. If you are uncomfortable with this, feel free to go directly to Amazon.com and search for the book or item of your choice.
15shares