This Kosher for Passover Flourless Chocolate Cake is so good that it’s my go-to flourless chocolate cake all year round! (Jump directly to the recipe.) 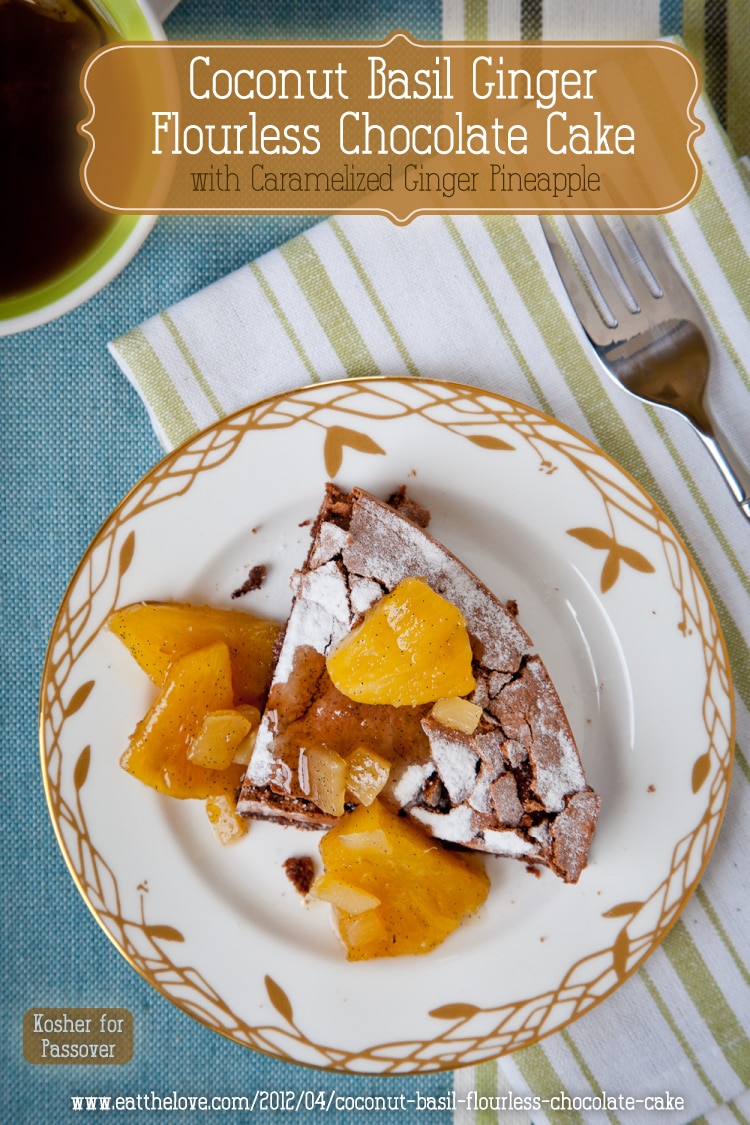 “Damn you!!!” proclaimed my new friend Danny (or new enemy, I’m not sure with the way he was sounding). He marched into the kitchen, where I was slicing up pieces of my Kosher for Passover cake for everyone. “I’m suppose to be suffering! This is too delicious for a Passover dessert. Damn you!!!” he stated emphatically with a fist shake in my general direction. Then Danny proceeded to shovel another large forkful of my Coconut Basil Ginger Flourless Chocolate Cake with Caramelized Ginger Pineapple into his mouth. I guess my dessert was a success? 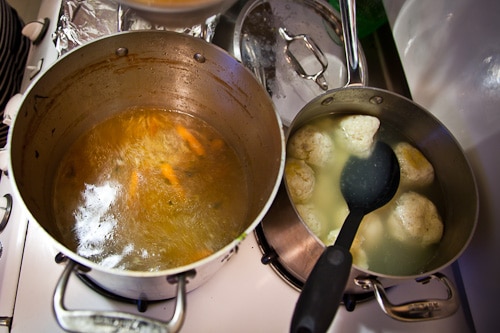 I had been invited to another Pseudo Seder by my friend Susie and had offered to bring dessert like last time. She seems to have them every two years or so, and I’m pleased to have a Jewish friend in San Francisco that throws them, because I have yet to find decent Matzo Ball Soup here. Ever since I moved away from St. Louis, I’ve missed it, and Susie makes a great matzo ball, all light and fluffy, with awesome chicken broth. Of course her beef brisket was nothing to sneer at either. I think AJ might have gone back for seconds. 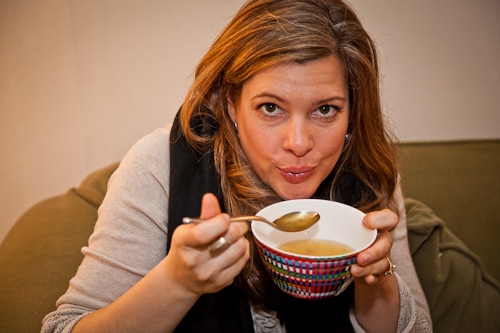 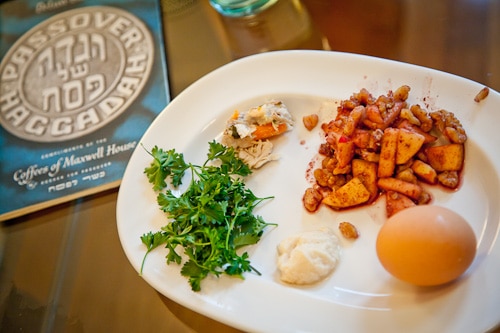 Susie always saves me the actual Maxwell House Haggadah, the Jewish text that you read from for the Seder dinner, while everyone else has to read from Xerox copies (suckers!). When she had invited me to her first Seder a couple of years ago, I got super excited and asked her if we would be reading from the Maxwell House Haggadah, as that is what I used to read from growing up and going to my friend’s Seders in the Midwest. She said she wasn’t sure if she could get one, but then she had her dad send her one just for me. How awesome is she? How awesome is her dad? On a complete aside, the Maxwell House Haggadah is what the White House uses for their Passover Seder. Woo hoo! 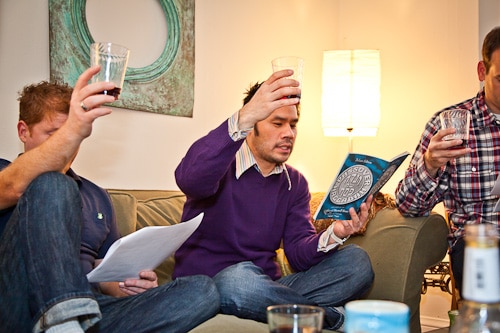 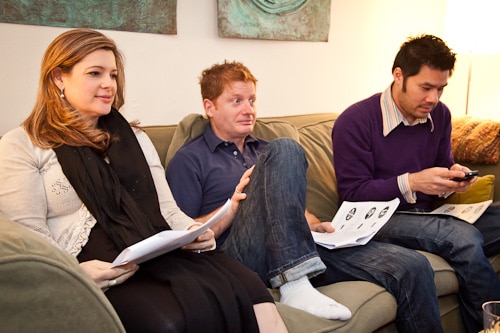 Susie isn’t super religious but she does try to observe tradition when it comes to the Seder. We didn’t do the four hour long service, but we did the good stuff, like eating the bitter herb, dipping our hands into the Manischewitz Concord Grape wine, and hiding the Passover Matzo which we nearly forgot to search for. With some goading at the very end of the evening (Susie basically told us where to look) AJ found it in one of their jackets and won a sweet $5 prize! Woo hoo! 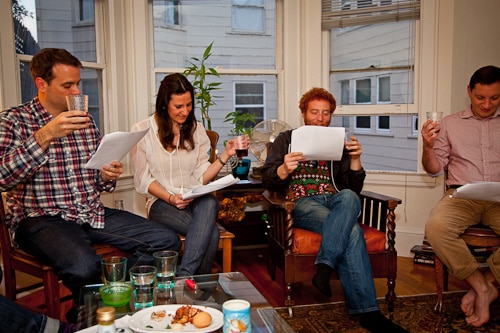 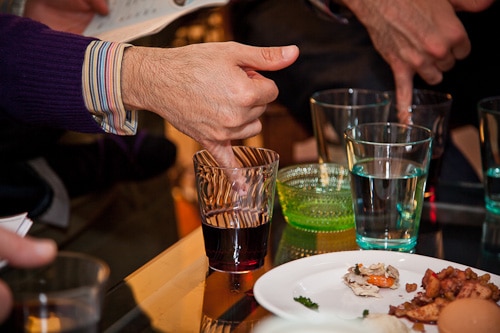 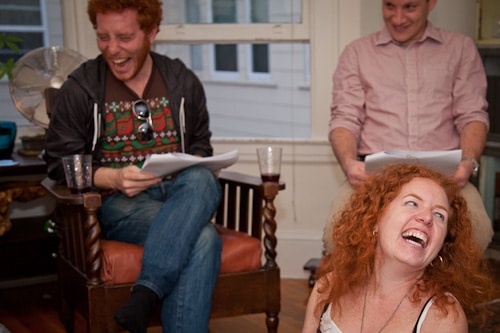 Susie is also trying to create her own traditions for her household and family. The cup that she leaves out for Elijah was a tiki cup that her husband Jai acquired at a tiki lounge. Apparently every tiki lounge he goes to, he procures a tiki cup to bring home. I love it when people have traditions like that. The one for Elijah was from the Tonga Room here in San Francisco’s Fairmont. 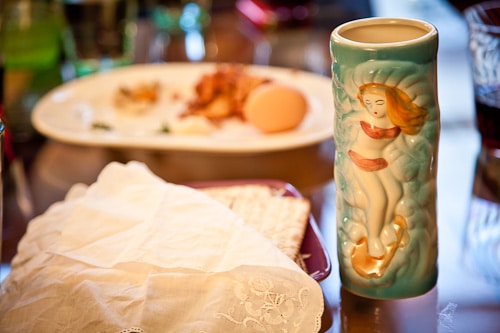 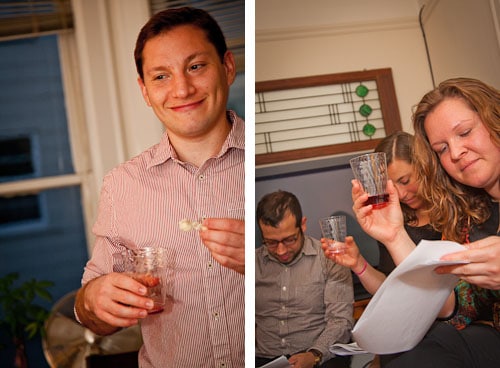 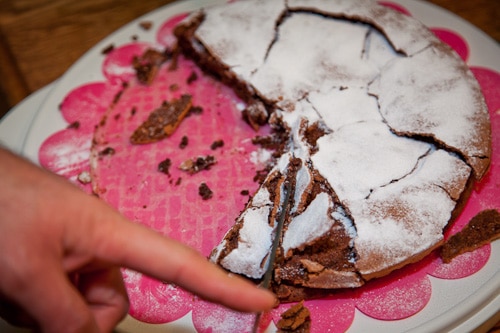 The challenge of baking Kosher for Passover is always interesting. No leavening which includes yeast, baking soda or baking powder. Susie’s family observe Ashkenazi tradition where not only are wheat, barley, rye, spelt or oats forbidden, but also rice, millet, corn and legumes like beans and lentils. Always up for a challenge, I decided to revisit one of the desserts that I made last time, a flourless chocolate cake. A crunchy flourless cake, the only leavening that occurs is from the whipping of the egg whites, which causes it to rise spectacularly in the oven, and then collapse down on itself. Since I’m not a fan of margarines, I opted to go with the coconut oil, which lead to the me giving it a tropical twist with savory notes of basil and ginger. The caramelized pineapple gives it that extra something special, that had people yelling at me because it was so good. I’m going to take that as a good thing. 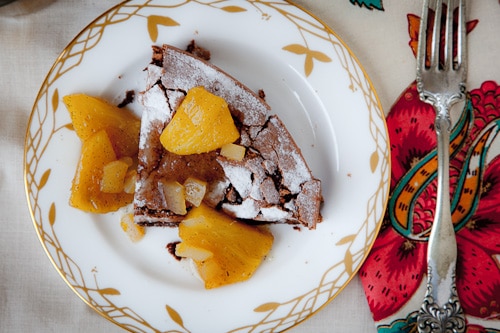 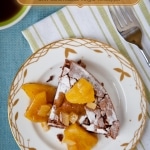 Not only is this cake naturally gluten free as there is no flour in it, but it’s also Kosher for Passover. However, this isn’t the sort of “kosher for Passover” type of cake that most people are used to. It is, in fact a wonderful dessert for whenever you want to make something decadent with tropical notes. The fresh basil in it isn’t super strong, but lends a subtle elusive savory note that helps tie together the sweet pineapple fruit and the bitternotes of the dark chocolate. My friend Susie claims it’s the best Kosher for Passover dessert she’s ever had in her entire 30+ life. True story. If making this Kosher for Passover, be sure to check your chocolate to see if it has any hidden soy in it, as well as your powdered sugar for cornstarch as that’s not KfP if you observe Ashkenazi food traditions. KfP chocolate will be soy lechithin free, and KfP powdered sugar will use potato starch instead of corn starch. If you can’t find KfP powdered sugar, place a couple of tablespoons of regular sugar with half a tablespoon of potato starch in a blender or food processor and grind until it turns into a powder (this might take some time).
Course Dessert
Cuisine American
Prep Time 20 minutes
Cook Time 25 minutes
Total Time 45 minutes
Servings 12
Calories 250kcal
Author Irvin

This blog currently has a partnership with Amazon.com in their affiliate program, which gives me a small percentage of sales if you buy a product through a link on my blog. I only recommend products (usually cookbooks, but sometimes ingredients or equipment) that I use and love, not for any compensation unless otherwise noted in the blog post. If you are uncomfortable with this, feel free to go directly to Amazon.com and search for the book or item of your choice.
561shares