You are here: Home / cake / Chocolate Rolled Cake with Brown Sugar Buttercream and Pistachios for my partner AJ’s 40th Birthday 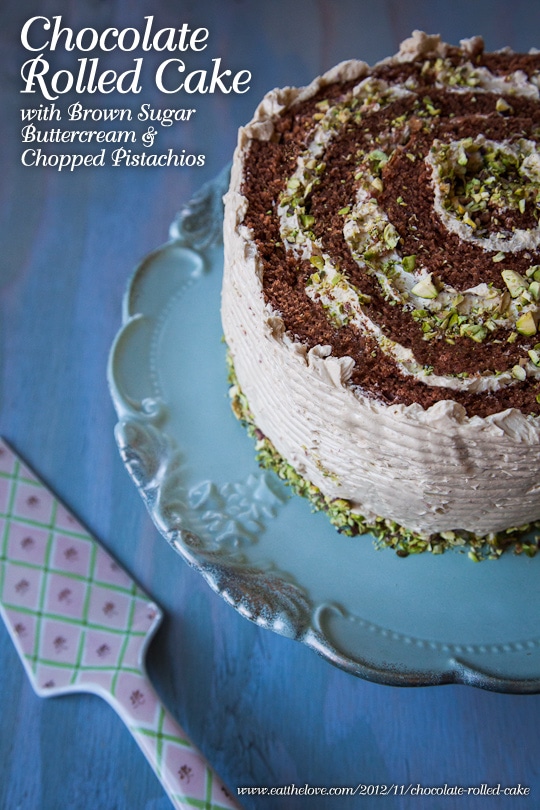 “I dunno, when I eat a cake, I usually like it fresh, not old or vintage” quipped AJ as I unwrapped a review copy of Vintage Cakes by Julie Richardson that Ten Speed Press had sent me. I mentally rolled my eyes, but really I found AJ’s bad jokes to be endearing. After all, he is a teacher, and hence, has a teacher’s sense of humor (bad puns are his specialty, closely followed by ridiculous portmanteaus). I’m used to it. I ignored what he said, and flipped through the book, pleased to find some old classics that I was familiar with, along with a number of other cakes that I didn’t know about. The book had arrived just in time for me, as AJ had a “milestone” birthday coming up, and what better way for us to celebrate it, but by making a cake from a different era? Thankfully I found inspiration in the book, coming up my own variant of a rolled cake that was featured in the book, a Chocolate Rolled Cake with Brown Sugar Buttercream & Crushed Pistachios.

There’s always a huge pressure to celebrate birthdays, especially when it comes to big milestone numbers. AJ always questions this approach, asking why birthdays that end with zero or five are the big one. Being the nerd that he is, AJ wondered why birthdays that were divisible by three or prime number birthdays weren’t celebrated as important birthdays instead? “It seems so arbitrary…” which, in my head, meant AJ probably didn’t look forward to having to check a different box on forms now. Of course, it’s a different sort of pressure when it’s your partner who is having that birthday. What sort of presents do you get him, does he want a party, who should you invite and more importantly what should you bake for him? 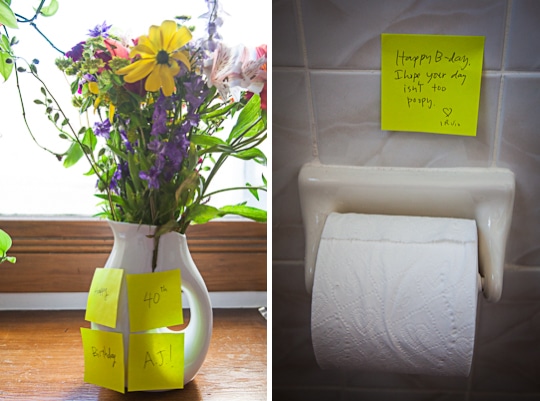 Note the classy post-it I left for AJ in the bathroom.

Of course, it doesn’t help if you are known for your baked goods. Our mutual friends didn’t help by leaving him message on his Facebook wall like “Bet someone special will be baking you a CAKE!” and “I hope Irvin bakes you something mind boggling delicious!” Oh the pressure of being a baker and food blogger. I had to deliver the goods, and really make sure it came through. But the odds were not with me.

Turns out, running out and buying presents for AJ on the day of his birthday was not conducive toward me making him a cake. I barely had time to buy the presents, wrap them and bake the cake layers before AJ got home. Once he arrived from work, I jumped in the shower and got dressed for the restaurant I had made reservations for (the day before) swearing to him that I would make the cake frosting and assemble the cake when we got home. It didn’t happen. The frosting did not cooperate. 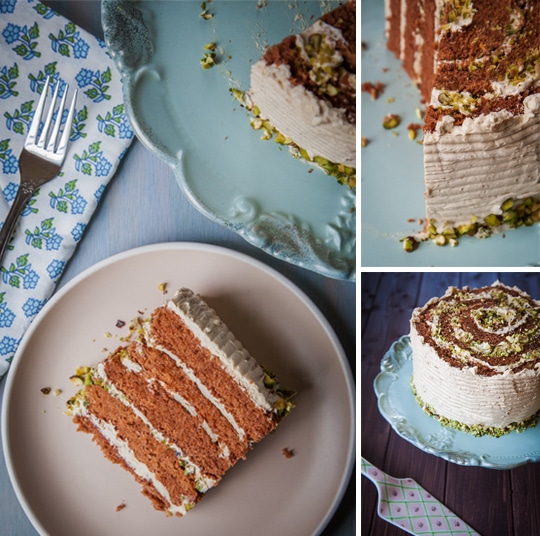 In fact, I made two different variations of frosting after dinner and sadly both didn’t work out. AJ didn’t get his birthday cake that night, as he was too tired to wait for me to attempt a third frosting. This is what I get for trying new recipes late at night, with a mounting pressure and urgency. I clearly should not compete in those time pressure-sensitive cooking games shows (so friends, please stop asking me when I’m going on Top Chef). AJ swore that he didn’t mind but let me tell you, I was pretty disappointed.

In the end, it all worked out in the end according to AJ. He treated the next day as just an extension of his birthday (two days to celebrate instead of one!) and got to eat his cake, which he said was pretty great. It had most of his favorite flavors, chocolate, brown sugar, pistachios all in one, and after a big chunky slice of it, we were rolling ourselves to the couch (get it? rolled ourselves… AJ isn’t the only one in our apartment with the monopoly on puns). And I learned a lesson as well. I need to stop checking my Facebook wall on important days. It just stresses me out. 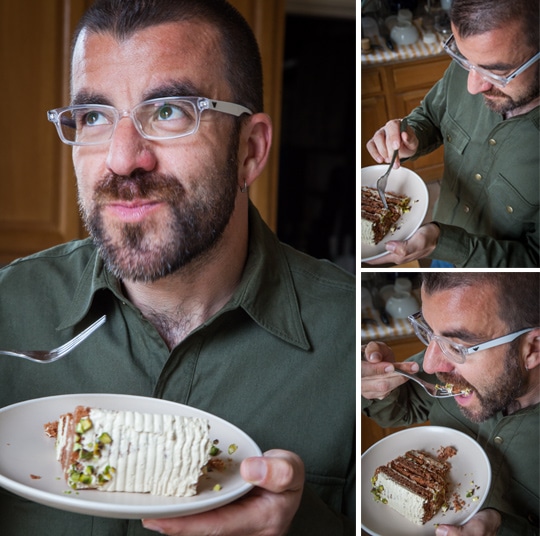 Special thanks to Ten Speed Press for sending me a review copy of Vintage Cakes by Julie Richardson. Though the book was provided by them, I was not compensated for anything I wrote above and all opinions are my own.

A special occasion cake, rolling a cake in this fashion isn’t nearly as difficult as it may sound, though it is a bit time consuming. If you want to make the cake layer on the day before you serve it, just let the cake cool completely and wrap it tightly with plastic wrap and store it in the refrigerator. Just let the cake come to room temperature before you assemble it as a cold cake is difficult to roll and will break. Regardless though, the cake layers themselves might crack a bit when you roll them, but no one really will care as the layers of pistachios and brown sugar buttercream make the entire thing look fantastic regardless of a few minor imperfections.

Inspired by a recipe from Vintage Cakes, though everything in my recipe is completely different than that specific recipe. That’s just the baker in me, I guess. 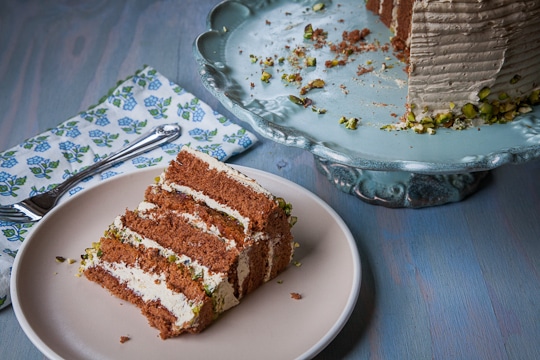 To assemble
3/4 cup (105 g) chopped unsalted pistachio nuts (if you can only find salted nuts, omit the salt in the buttercream)

5. Scrape the batter into the prepared baking sheet and spread evenly over the pan. Bake the cake for 22 to 27 minutes or until a toothpick inserted in the middle comes out clean and the cake feels firm to the touch. Let cool completely in the pan before assembly the cake.

7. Assemble the cake by first placing the cake with the long side facing you. First trim 1/2 inch off the edges on the left and right to make a proper rectangle. Cut the cake in half with a serrated knife, making two 12 x 8 inch rectangles. Further split each rectangle in half again, to make four 12 x 4 inch rectangles. Lift the cake up and cut the parchment paper underneath the cake, right where you cut the cake, so the parchment paper is also split with the cakes. Spread about half the buttercream over the cake and then sprinkle 1/2 cup of the chopped pistachios over the frosting evenly. 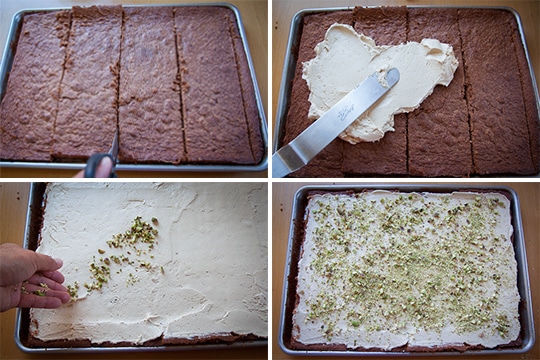 8. Roll the first strip of cake by tucking the cake into the roll and continuing to roll tightly, peeling the parchment paper as you tuck and roll. Place the rolled cake upright in the middle of the serving platter so you can see the roll on top. Then take the second strip of cake and wrap it around the first rolled piece of cake. Continue with the third and fourth piece, wrapping the cake around each other in a spiral pattern. You might have to trim some of the cake off to make it fit properly in the end, but don’t worry too much about it. Once you’ve rolled all the cake, frost the outside of the cake with the remaining frosting, making sure to leave the top of the cake exposed for everyone to see. If you want to get fancy you can use a cake comb around the outside of the cake but don’t feel like that’s necessary. Sprinkle some of the remaining chopped pistachios on top of the cake, where the frosting is, to help cover up some of the big holes and gaps in the cake roll, and then gently press the remaining chopped pistachios at the bottom of the cake about an inch up. Serve immediately or keep it in the fridge for up to three or four days, bringing to room temperature before serving. 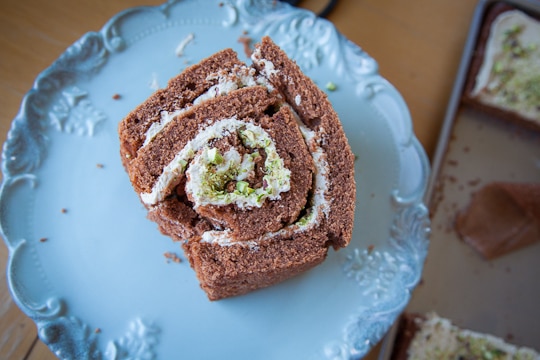 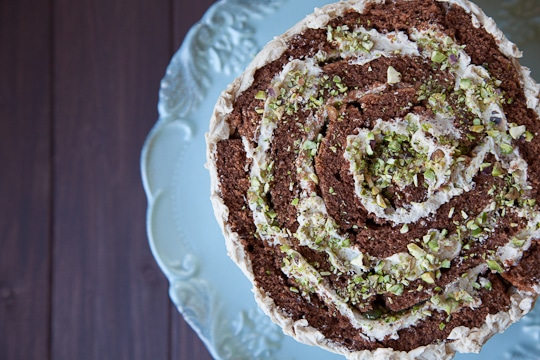 This blog currently has a partnership with Amazon.com in their affiliate program, which gives me a small percentage of sales if you buy a product through a link on my blog. I only recommend products (usually cookbooks, but sometimes ingredients or equipment) that I use and love, not for any compensation unless otherwise noted in the blog post. If you are uncomfortable with this, feel free to go directly to Amazon.com and search for the book or item of your choice.
2029shares