If you’re looking for stunning chocolate pumpkin pie, check out this easy to make recipe that is sure to impress everyone! (Jump directly to the recipe.) 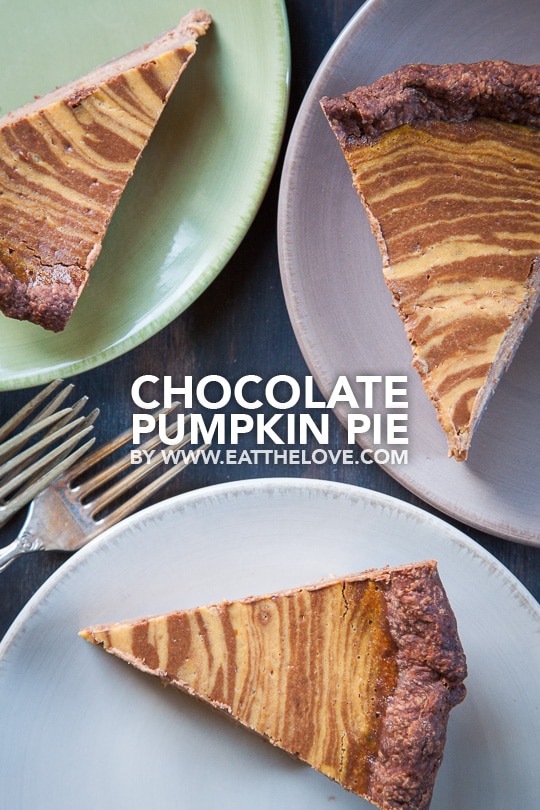 If you watched my Anolon Livestream last week where I talked about Thanksgiving, I made a few comments about those weirdos that don’t like pumpkin pie. What?! I know! Those people actually exist! But once I was done with the livestream broadcast, I found out that one of the behind-the-scenes folks actually DOESN’T like pumpkin pie! Oh man, busted! It was like I was talking specifically about her! I felt terrible, though honestly I do sometimes wonder about those folks who aren’t a fan of it. Everyone has their own tastes I guess, but I do always want to sit them down and ask if they’ve had REALLY good pumpkin pie before or if they’ve just had bad ones. And then I want to introduce them to my Chocolate Pumpkin Pie. Not only is it a stunning pie, but the combination of tradition pumpkin and chocolate makes this pie something really special for the holiday dinner table. 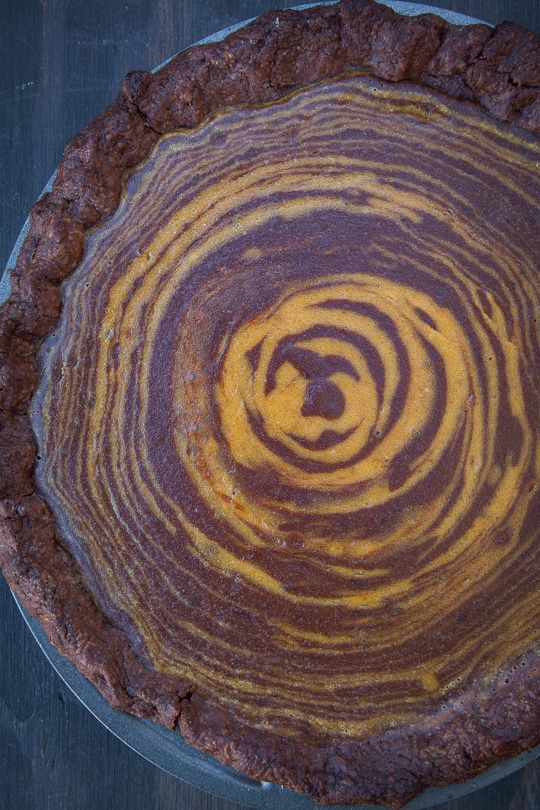 Thanksgiving is one of those holidays that I absolutely love. I’m not the only one. I was chatting with my friend Amy over at Cooking with Amy at an event and she said she loved Thanksgiving because there isn’t the same pressure that other holidays have for buying presents. You get a couple of extra days off of work and you can really just enjoy family and friends. I love that idea of a no pressure holiday. And though people sometimes stress about the food, in the end, it’s the company that counts the most, not the food. 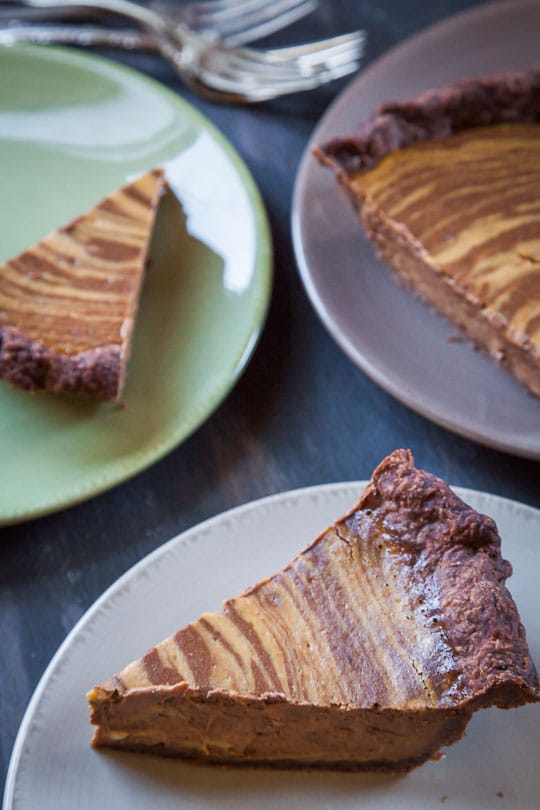 Of course, that doesn’t mean that I still don’t put some effort into the meal. This chocolate pumpkin pie recipe is the perfect example that. Despite how it looks, it actually isn’t that much more difficult than a regular pumpkin pie. But the way it looks is pretty darn cool. I wonder how that woman who was working the Livestream event would like this pie? Something tells me it might actually change her mind about pumpkin pie. At least I hope it would make her reconsider it. 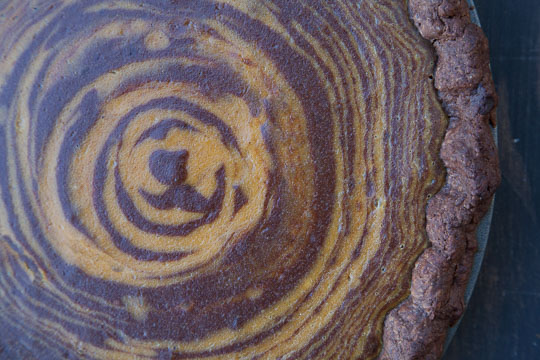 This pumpkin chocolate pie is done “zebra” style, with stripes of chocolate and pumpkin batter spooned into the pie crust. It’s not difficult but once it’s done, it’s a pretty stunning looking pie that looks great on the dinner table. Make sure to bring the cream cheese up to room temperature before making the filling. If you forget, just place the cream cheese (still in the foil wrap) in a bowl of warm water and change the water as it cools. The cream cheese will warm up in about 10 to 15 minutes. 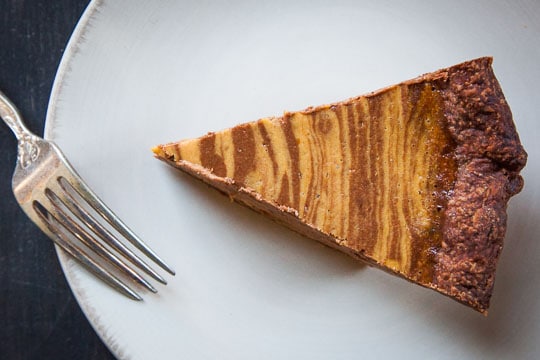 Directions
1. Make the pie crust by placing the flour, cocoa, sugar and salt in a large bowl and stirring together vigorously with a whisk until well blended and uniform in color. Cut the butter into 1/2-inch chunks and sprinkle over the dry ingredients. Using your fingers, smash the butter into small flat pieces, until they are roughly the size of peas. Drizzle 2 tablespoons of water over the ingredients and toss until a dough forms. Add more water as necessary to make the dough form.

2. Once the dough has formed, gather it together and press it into a disk. Tightly wrap it in plastic wrap and place in the refrigerator for 30 minutes to an hour or until it firms up. Once firmed up, roll the dough out into a 11-inch round and fit it into a pie pan, crimping the edges and anchoring it to the edge of the pan. Cover up with the same plastic wrap you used to wrap the dough disk. Place back in the fridge for 15 minutes. While the pie crust is chilling, preheat the oven to 350ºF. 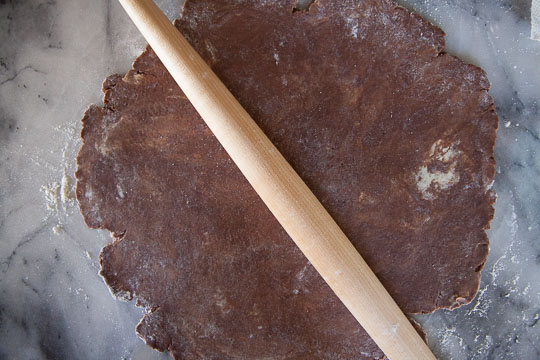 3. Once the oven has preheated and the pie crust has chilled, place the pie crust on a rimmed baking sheet. Prick the pie crust all over with a fork then cover the pie crust with a piece of parchment paper and pour pie weights, dry beans or uncooked rice over it. Bake in the oven for 10 minutes, then remove the paper with the weights/beans/rice and bake uncovered for an additional 10 minutes or until the top of the crust starts to look dry. Leave the oven on at 350ºF. 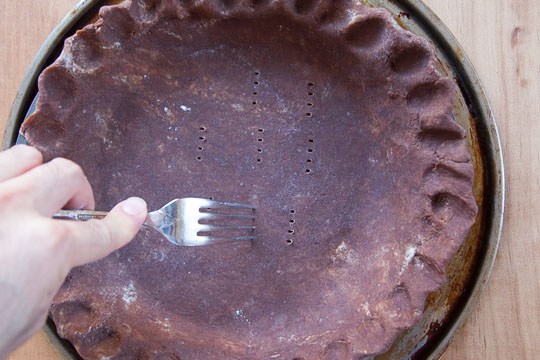 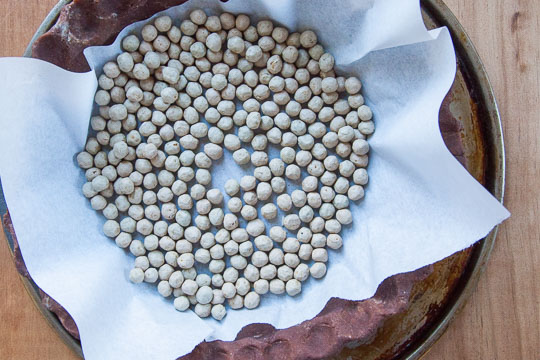 4. While the pie crust is baking, make the filling but placing the cream cheese and pumpkin puree in the bowl of a stand mixer fitted with a paddle attachment. Beat the two ingredients together on low speed, until they are well blended. Add the sugar and salt and mix on low speed until just blended. Add the eggs, one a time, beating until just incorporated before adding the second egg. Add the half and half, melted butter, vanilla and pumpkin pie spice blend and beat until just incorporated.

5. Pour half the pie filling into a clean bowl. Add the cocoa powder to the remaining bowl and beat until incorporated and uniform in color.

6. Once the pie crust has done pre-baking, let cool for 10 minutes. Then spoon 1 tablespoon of plain pumpkin puree into the middle of the pie crust. Spoon 1 tablespoon of the chocolate filling in the middle of the plain pumpkin puree. Repeat the process, alternating batters, until the pie shell is completely filled. As you fill up the pie, the filling will start to look striped on top. You may have a little pie filling leftover, just discard it. 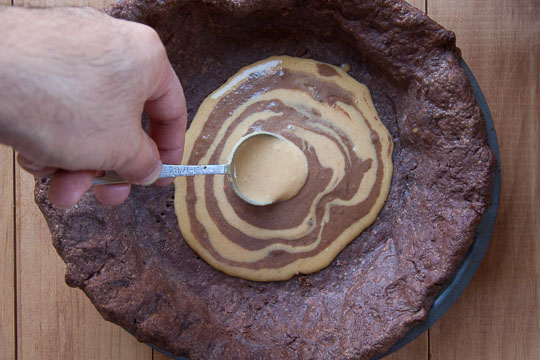 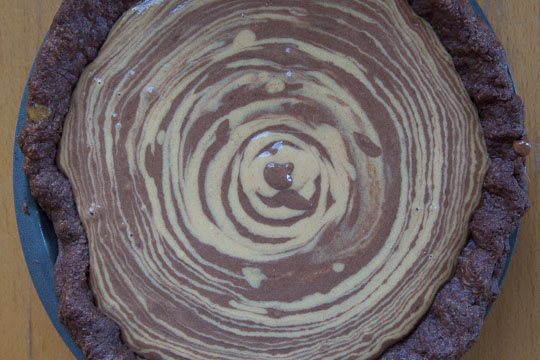 7. Carefully move the pie back to the oven and bake for 45 to 50 minuts or until the center of the pie just barely jiggles. Let the pie cool to room temperature then refrigerate overnight before serving.

If you like this chocolate pumpkin pie recipe, check out my other recipes for pumpkin:

This blog currently has a partnership with Amazon.com in their affiliate program, which gives me a small percentage of sales if you buy a product through a link on my blog. I only recommend products (usually cookbooks, but sometimes ingredients or equipment) that I use and love, not for any compensation unless otherwise noted in the blog post. If you are uncomfortable with this, feel free to go directly to Amazon.com and search for the book or item of your choice.
155shares