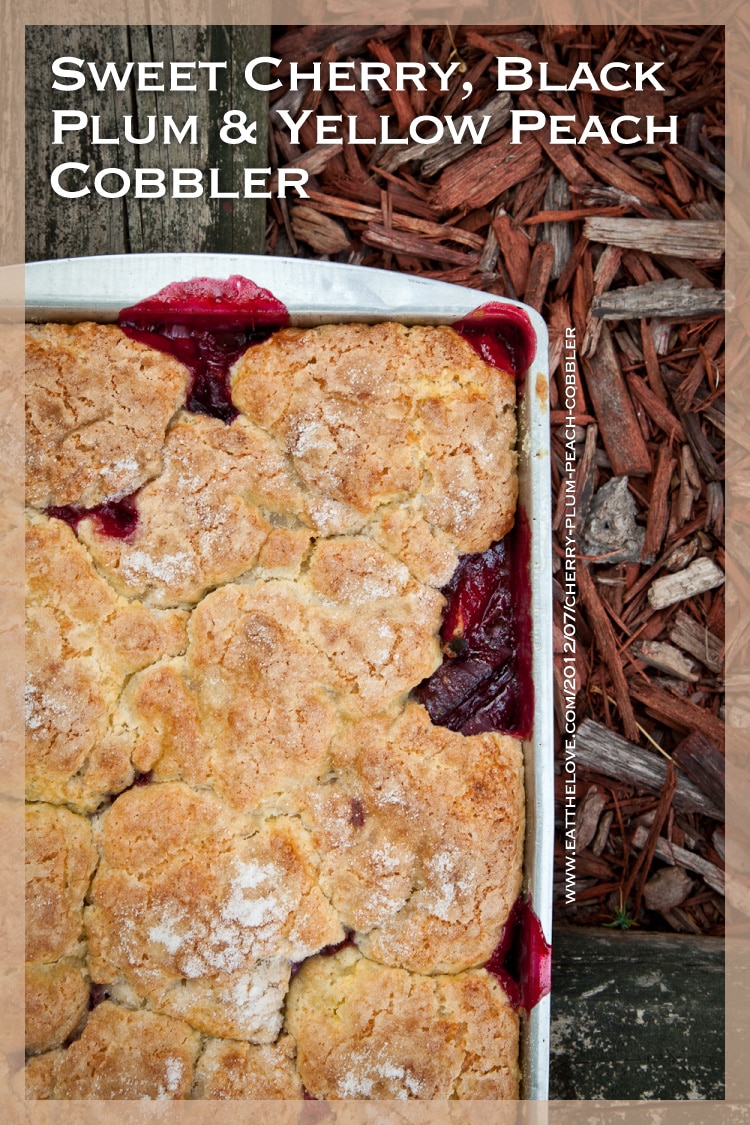 There’s something comforting and downhome about cobbler. Soft buttery biscuits floating atop thickened, just barely sweetened, summertime stone fruit like sweet cherries, black plums and super ripe peaches. It’s pretty much a crowd pleaser dessert and it’s what I turned to when AJ volunteered me to make a dessert for his family get together in Indiana. Truthfully, I toyed with making the dessert a bit fancier (in that sort of typical San Franciscan recipe developer way that I have a habit of doing) I resisted. I mean would AJ’s family appreciate a thyme infused biscuit or some slivered leaves of basil in the fruit filling? Probably, but sometimes you gotta keep it real and go with the idea of basic is better. I’m darn happy I did just that with this Sweet Cherry, Black Plum and Yellow Peach Cobbler, as it was a definite winner 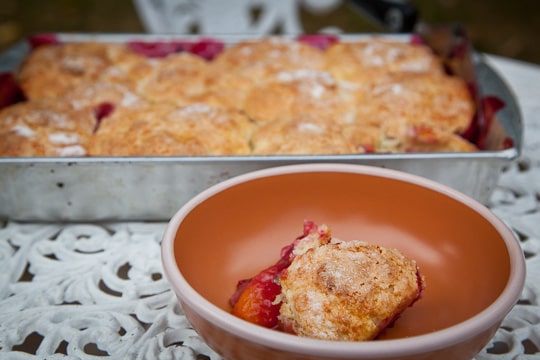 AJ and I were back in the Midwest visiting family during the summertime. Personally I was a bit dubious about leaving San Francisco to go back to the heat and humidity, but my doubts were waylaid when I arrived with him. Sure the heat was a bit uncomfortable, but it had been awhile since I had gone back to the Midwest in the summertime and I had forgotten how much I love it. AJ’s family lives out in the country, about 40 miles west of Indianapolis, on a lake. This meant we got to go waterskiing for a bit, which was awesome, even though I only was able to do it for a bit before I tired out. Man I am out of shape. 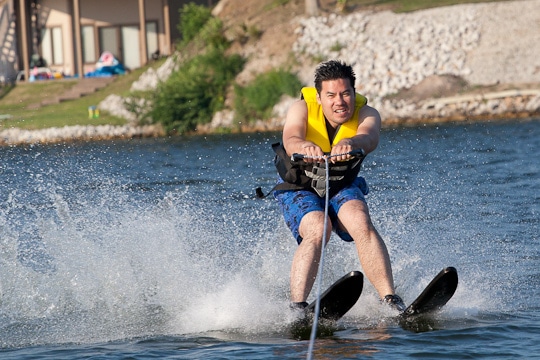 AJ’s family is pretty extensive, and though we had plans to see most of them at a get together, we also made it a point to meet up with a few of them on their own. This turned out to be a good thing, as AJ’s brother was still recovering from pneumonia and couldn’t make it out to the country where his parent’s live. Instead, we drove in and got a tour of his backyard garden which he and his wife have created, along with their bees (two hives! I call dibs on a jar of honey when they harvest it.) and chickens! I so want chickens. *sigh* 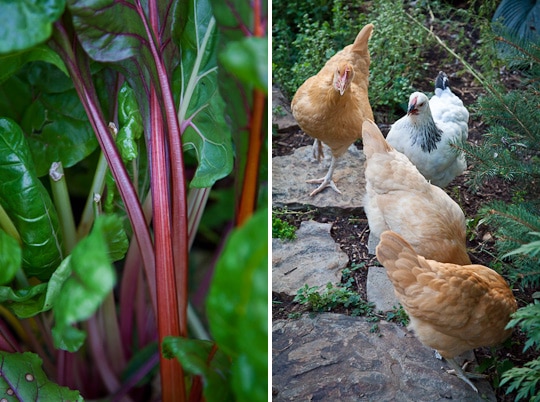 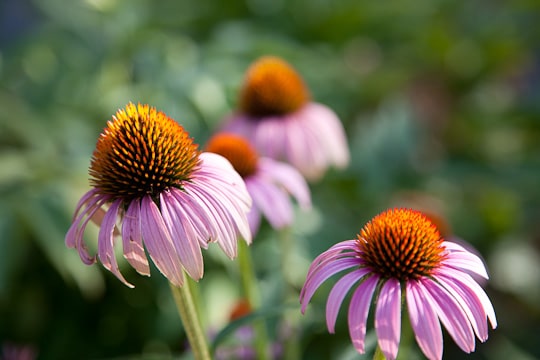 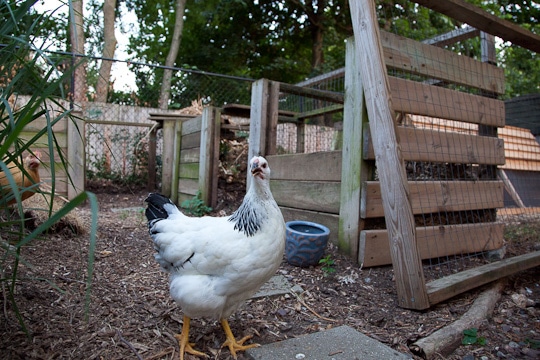 Dinner with his brother, lunch with his niece, making dinner with friends (pie and pie!) and a mid-afternoon snack with an uncle were all part of the our trip. I even carved out a little bit of time to get lunch with Deb and Rod of Smith Bites, who I utterly adore. Yes, it’s true that nearly all our events in Indiana revolved around food, but not EVERYTHING we did was food related. We actually took a little bit of time to take AJ’s niece and nephew to the Indianapolis Motor Speedway Hall of Fame Museum. Talk about some beautiful cars. 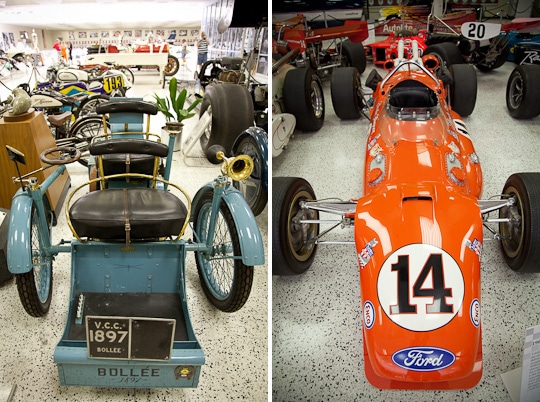 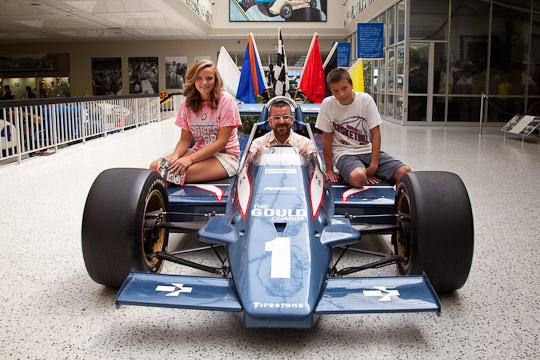 Of course the main event of the trip was the family gathering that had most of AJ’s immediate family in attendance. It was super fun to see everyone and catch up on what everyone was doing. Pulled pork, potato salad, and corn were served up for everyone and I was pretty happy that I reigned in my initial instinct to get all fancy with the cobbler. Straight up cherry, plum and peach cobbler seemed the perfect match, along with the butterscotch cake and marshmallow fudge brownies that were there for dessert. 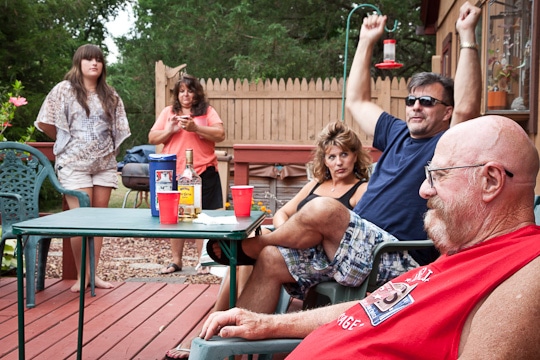 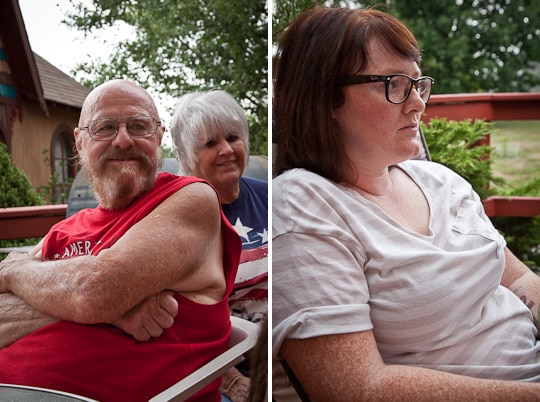 Soon the trip was over, faster than I expected and we packed up our stuff and headed out back to St. Louis, where we were going to spend a few more days with my family. I took a look around at AJ’s parent’s house, full of kookiness, quirk and warmth and said goodbye…until next time.

This is the sort of no nonsense dessert that pleases pretty much anyone. Though the fruit needs to be bought, and there’s a little bit of cutting and pitting, most every other ingredient can be found in your pantry, unlike some of my other fancy pants recipes. Toss it together early in the morning when the day hasn’t gotten too hot, and then let it cool to room temperature to serve. Or serve it up still warm from the oven for breakfast. After all, it’s fruit so it must be good for you right? 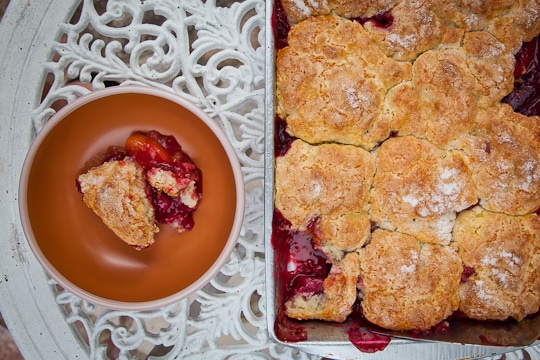 2. Pit the cherries and slice the peaches and plums and place them in a large mixing bowl. Add the flour, sugar, vanilla, cinnamon and black pepper. Toss the filling together until the fruit is evenly coated and pour it into the baking pan. Place in the oven and bake for 20 minutes.

3. While the fruit filling is baking, make the biscuit topping by placing the flour, sugar, baking powder, baking soda and salt in a large mixing bowl. Cut up the butter into 1/2 inch chunks, sprinkle over flour and toss to coat. Flatten the cubes of butter with your fingers until all the butter has been smashed. Start rubbing and squeezing the butter together with your fingers, until the ingredients start to clump together. Add the yogurt and the half and half and toss until biscuit batter comes together.

4. Once the fruit has baked for the 20 minutes, pull the pan out of the oven and drop the biscuit batter over the fruit in 2 to 3 inch rounds, covering the entire top of fruit. Beat the egg yolk with 1 tablespoon of water, until frothy. Brush the top of the biscuit dough with the egg wash and sprinkle the top with the white sugar. Place back in the oven and bake for an additional 18 to 20 minutes, or until the biscuit tops are golden brown and the fruit filling has thickened and is bubbly.

5. Cool at least 15 minutes on a wire rack to let the filling thicken a bit and then serve warm. Or cool to room temperature and serve.

This blog currently has a partnership with Amazon.com in their affiliate program, which gives me a small percentage of sales if you buy a product through a link on my blog. I only recommend products (usually cookbooks, but sometimes ingredients or equipment) that I use and love, not for any compensation unless otherwise noted in the blog post. If you are uncomfortable with this, feel free to go directly to Amazon.com and search for the book or item of your choice.
274shares