This blackberry jam cake, otherwise known as a Woodford Pudding, is made from scratch but is super easy and served with a fast bourbon butterscotch sauce! (Jump directly to the recipe.) 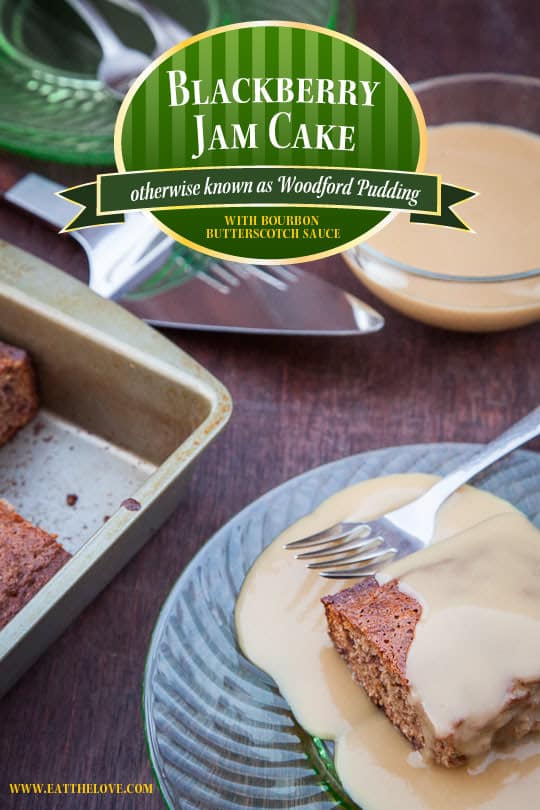 I have little to no connection with Kentucky. I’m not a huge fan of the derby, much less horse racing in general. I certainly don’t drink mint juleps (as delicious as they sound). And I can count on one hand the number of times I’ve been to Kentucky. But I do have to admit that I have a soft spot for the state. Kentucky women know how to wear fabulous hats when it’s appropriate. I briefly visited there on our road trip across the USA to get dinner with my pal Stella Park of the Brave Tart (though I don’t think she wears those hats, which I think is a shame). And without Kentucky, we probably wouldn’t have American bourbon, well at least not the good stuff. So when I stumbled across a recipe for Woodford Pudding, a blackberry jam cake that is a traditional Kentucky dessert often served on Derby day, I was immediately intrigued and knew I needed to make a version at home. 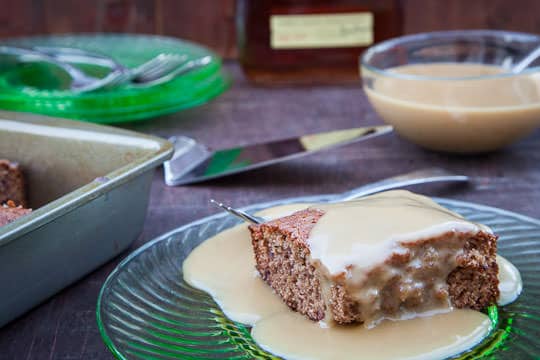 Now Woodford Pudding isn’t pudding in the Bill Cosby sort of way. It’s basically a blackberry jam spice cake, appropriate for the winter and holiday season. But it is also frequently served during the Kentucky Derby as well and though I have no real interest in the horse races, I certainly have a number of friends who do. But strangely the mint julep and derby pie seems to overshadow the Woodford Pudding when it comes to the Derby day treats and that’s a bit of a shame if you ask me. 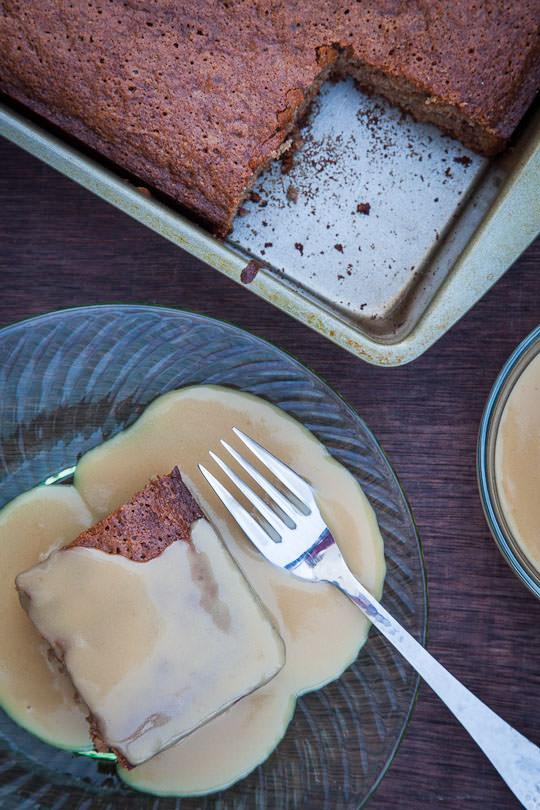 Turns out the original classic recipe for the dessert is pretty straightforward, using store bought blackberry jam to sweeten and flavor the cake. Since I tend to bake from scratch as much as I possible, I went through the extra step of making my own blackberry jam, which is easier than you think (three ingredients and eight minutes on the stove and you have jam). What I am surprised to find is that most recipes I could find didn’t include bourbon, something I thought was very much necessary for a Kentucky classic dessert named Woodford Pudding. A touch of bourbon, along with a butterscotch bourbon sauce to serve with this cake and I’m definitely going be putting this moist cake in my regular rotation throughout the year. No need to wait for a horse race! 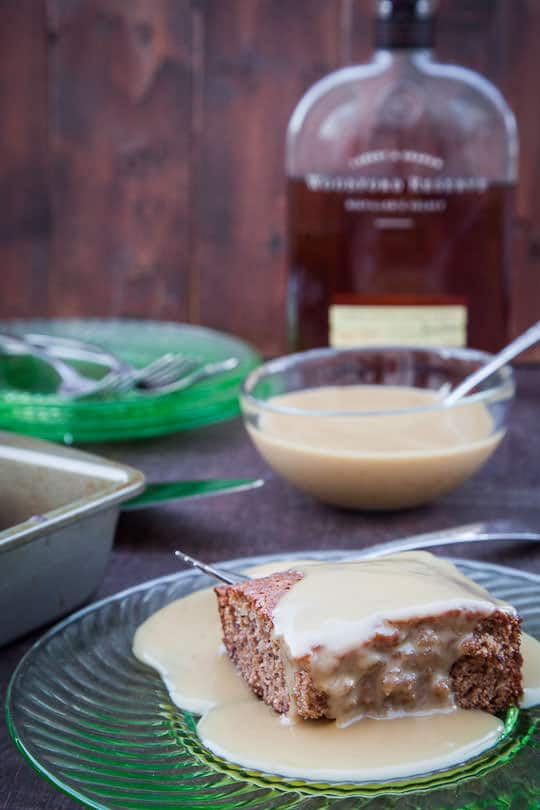 This classic Kentucky blackberry jam cake is often served during the holidays and the Derby and is usually made from commercial store bought blackberry jam. I deviated from tradition by first making the blackberry jam from scratch (don’t worry it takes less than 10 minutes to do) so I could make sure it had the best flavor possible and added Kentucky bourbon to the cake and sauce. Don’t be intimidated by the ingredient list below, the recipe comes together pretty fast. My bourbon of choice for the dessert was, of course, Woodford Reserve but feel free to substitute any bourbon or whiskey if you want. You can even substitute store bought preserves or jam for the blackberry jam if you want, I won’t tell anyone. 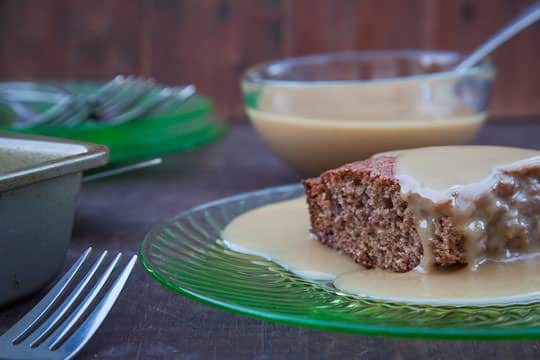 Directions
1. Make the blackberry jam by placing all the ingredients in a small pot. Turn the heat to high and stir occasionally breaking up the fruit, until the berries release juice and the liquid starts to boil. Reduce heat to a simmer, stirring frequently and let cook for 7 minutes or until the jam has thickened and reduced to 1 1/4 cup. Remove from heat and let cool while you make the cake batter.

2. Preheat the oven to 325˚F. Generously spray a 9 x 13 baking pan with cooking oil. Place the butter, sugars, spices, black pepper, salt, baking powder, baking soda and lemon zest in a the bowl of stand mixer fitted with a paddle attachment. Cream the ingredients together on medium speed until the mixture looks fluffy and clings to the side of the bowl. Add the eggs, one at time, beating into the batter until incorporated before adding the next egg. Add both flours and mix slowly until incorporated. Add the sour cream and bourbon and mix until incorporated. Add the blackberry jam (it may still be a bit warm, this is fine, but if still hot, then let it cool a bit longer). Beat until the jam is incorporated. Scrape batter into the prepared baking pan and bake in the center of the oven for 35-40 minutes.

3. While the cake is baking, make the bourbon sauce by placing the cream, milk and brown sugar in a small clean pot. Mix 2 tablespoons of bourbon with the cornstarch to make a slurry and add it to the pot with cream. Bring the cream to a boil, stirring constantly and reduce heat to a simmer for 5 minutes, stirring frequently. The sauce should thicken. Remove from heat and add the butter and salt, stirring until the butter has melted. Add the remaining 4 tablespoons of bourbon and stir to incorporate.

Serve the Woodford Pudding with the bourbon sauce on the side or drizzled over each slice.

If you like this Blackberry Jam Cake (Woodford Pudding) recipe, check out these other Kentucky inspired treats for Derby Day!

This blog currently has a partnership with Amazon.com in their affiliate program, which gives me a small percentage of sales if you buy a product through a link on my blog. I only recommend products (usually cookbooks, but sometimes ingredients or equipment) that I use and love, not for any compensation unless otherwise noted in the blog post. If you are uncomfortable with this, feel free to go directly to Amazon.com and search for the book or item of your choice.
1211shares