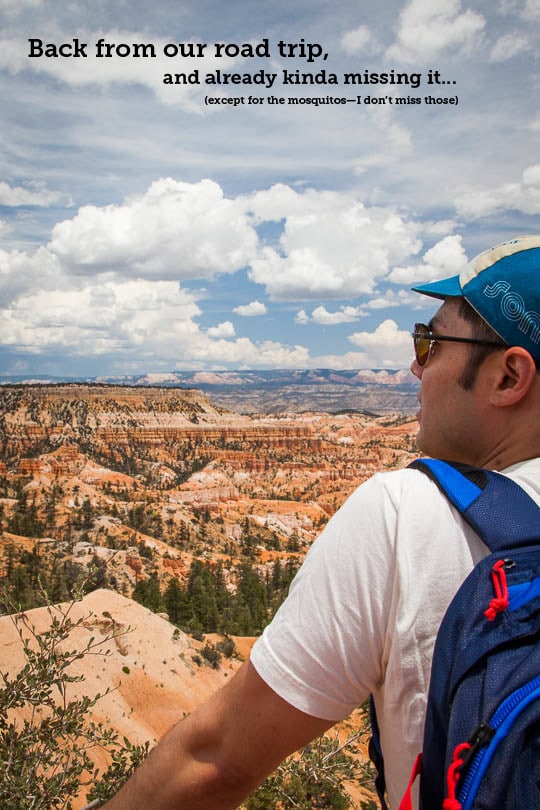 AJ and I are back from our shortened three-week road trip (which hopefully some of you followed along on our Instagram feeds). I say shortened which is totally relative because most people don’t have the luxury of taking three weeks off to gallivanting across the country. Thankfully AJ’s a professor so that means he gets the summer off and I freelance. But for us, three weeks is short compared to our epic seven-week trip last summer. But I have a cookbook to write as well as many other work obligations so three week will have to do. We camped half the time in national parks all over Utah (where we nearly passed out from heat) and Colorado (where we nearly were eaten alive by mosquitos), stayed in hotels, motels as well as a glorious couple of days with my friend Jen & Jeremy in Crested Butte, Colorado. We arrived back to San Francisco a few days ago and I’m still adjusting to being back, plowing through three weeks of old emails, a stack of physical mail and getting used to showering every day. So no recipe this week, but I’ll be back soon with recipes, photos from our trip and (hopefully) some more awesome stuff for you all. Yay for being home (I think)!

This blog currently has a partnership with Amazon.com in their affiliate program, which gives me a small percentage of sales if you buy a product through a link on my blog. I only recommend products (usually cookbooks, but sometimes ingredients or equipment) that I use and love, not for any compensation unless otherwise noted in the blog post. If you are uncomfortable with this, feel free to go directly to Amazon.com and search for the book or item of your choice.
2shares