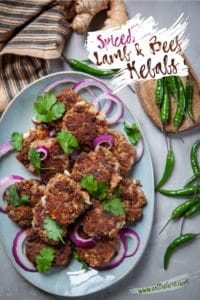 These kebabs have a bit of kick with the addition of the cayenne and Thai chili in them. Nik’s recipe calls for 1 pound of beef, but I did a mix of lamb and beef because I like the flavor that ground lamb adds to the recipe. Feel free to use 1 pound of ground beef if you prefer. These kebabs are great appetizers or can be served as a main course with a vegetables over a starch of your choice. They are panfried by themselves, not on a skewer on the stovetop in a skillet.

Though the ingredient list seems long, most the spices are probably in your pantry already. The few that aren’t including the chickpea/garbanzo bean flour (sometimes called gram flour or besan flour), can be found at online, at an ethnic grocery store (try one that sells Asian and/or Middle Eastern groceries) or at a well-stocked grocery store (look for it near other gluten free and whole grain flours). Fresh Thai chilis can also be found at Asian grocery stores, but you can substitute 2 small serrano pepper in place of the Thai chilis though it won’t be quite as spicy nor will it have the same sort of “fruity” flavor that Thai chilis have.

Finally, Nik’s original recipe calls for dried mint which is surprisingly hard to find in most grocery stores. If you can’t source dried mint, pick up a box of mint tea (flip over the box and make sure the ingredients are JUST mint, and not a blend of other herbs or teas) and use that in place of the dried mint. I used peppermint tea for this recipe, but because you only use 1 teaspoon (roughly half a tea bag) and it blends with all the other spices, any mint will do.