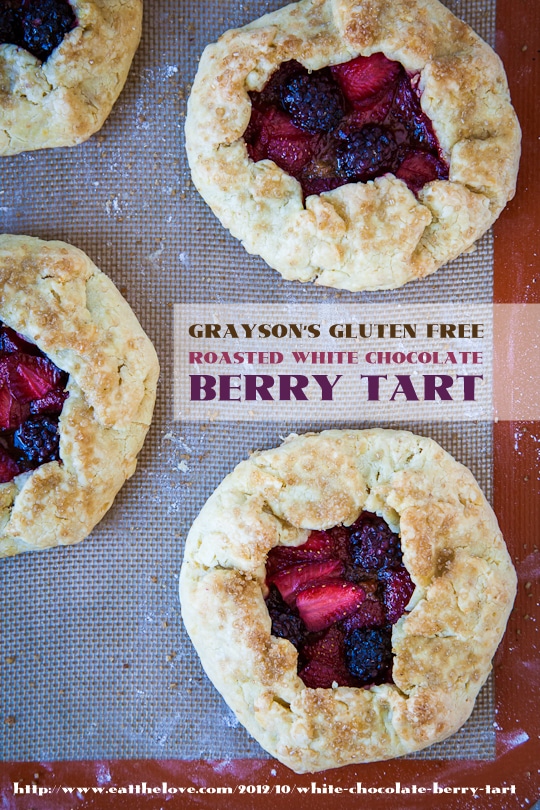 “How the hell did he know how to make a gluten-free tart without a recipe?” wondered my friend Brian, as I presented my Gluten Free Roasted White Chocolate Berry Tart along with my teammates, the awesome Heather of Farmgirl Gourmet and the fabulous Lisa of With Style and Grace. We were all visiting Louisville, Kentucky for GE Monogram and in a friendly “Iron Chef” competition to see who could whip up a better lunch between the food blogger teams. The secret ingredient happened to be potato chips, so for the savory portion, Heather and Lisa made a potato chip encrusted chicken over salad and tea infused rice, all the more impressive as Lisa was pregnant and not feeling her best. Apparently that mythical “second trimester” glow was exactly that – mythical in her case. 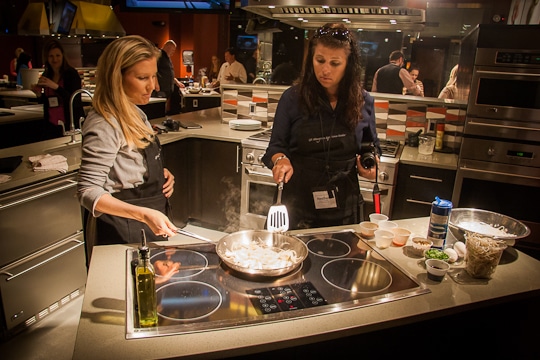 Lisa and Heather cooking up a storm on the GE Monogram induction stovetop.

Lisa, of course, is pretty much ready to burst right now as the Kentucky trip was back in May. I say that in the most loving way, as even though she never did get her mythical second trimester glow, she does look gorgeous pregnant. I’ve known Lisa for several years via twitter and the magic of social media. But within the short span of three months, I ended up seeing and hanging out with her practically every other weekend, even as she was packing up and moving up to Portland. Ah the irony of becoming real life friends, just as she was moving away from the San Francisco bay area. 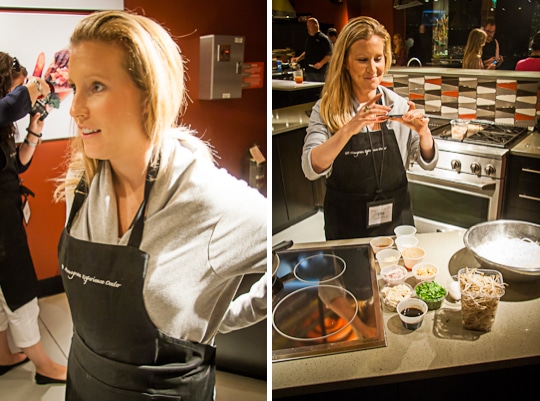 Because Lisa is ready to have her baby boy any day now, a group of food bloggers decided to host a virtual baby shower for her. I, of course, loved the idea of a virtual baby shower, especially the virtual part. I’m not one for baby shower games – you know, the ones that involve tasting baby food then guessing what that mystery green puree is, or sniffing at melted candy bars in the diaper. A virtual baby shower is just perfect for me, as I get to celebrate the eminent arrival of a much loved, much wanted baby…from afar. 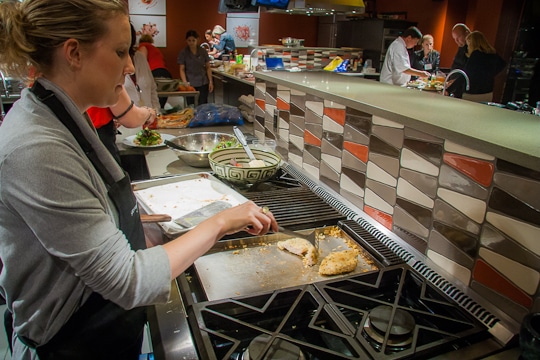 On top of that, Lisa is one of my favorite people. Fun, witty, slightly bawdy at times, I basically want to hang out with Lisa whenever I have a chance. Getting a chance to cook with her on the GE Monogram appliances, including their induction stovetop (which I’ve never worked on before this trip) as well as their super speedy Advantium oven (a name that sounds totally comic book, but apparently uses halogen, ceramic, conventional and microwaves to cook food crazy fast) was super awesome. Heather and I had a blast with Lisa making a meal in 50 minutes all without the use of a knife (apparently it was a legal thing). Well the knife thing was kind of annoying, but we got around that. 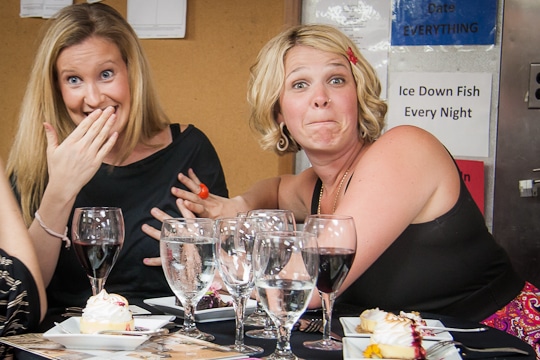 Maggy of Three Many Cooks feeling up Lisa. Don't ask.

Despite having a fab time in the GE Monogram kitchen, and making a fantastic meal, we didn’t win the Iron Chef contest, though, you know in the words of Chef Joe Castro and Chef Brian Logsdon who both were working the GE Monogram kitchen, we were all winners. Ahem. But the real winner is Lisa, who gets the best prize of all – a baby boy. I can’t wait to meet him. Happy virtual baby shower Lisa! I wish you and your husband Ben a mellow fuss-free child and many evenings of uninterrupted sleep… 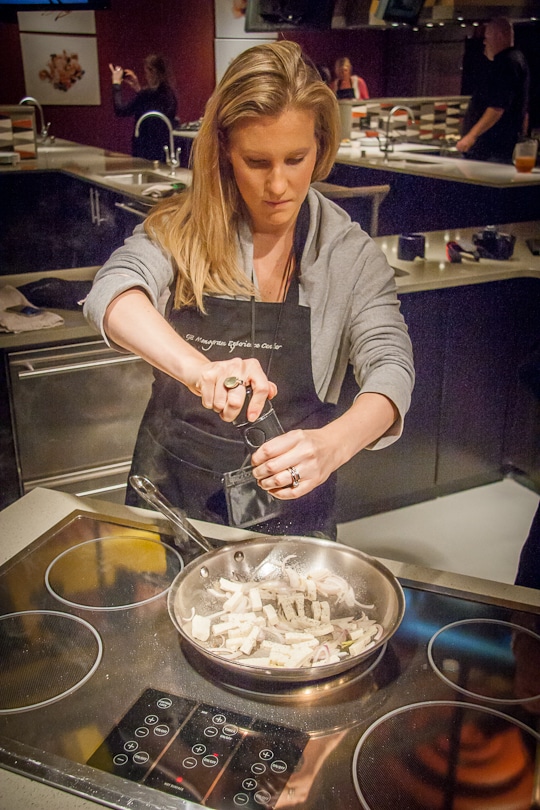 Lisa of With Style of Grace, looking stylish and graceful.

This virtual baby shower is hosted by Maria of Two Peas and their Pod, Marla of Family Fresh Cooking, Gaby of What’s Gaby Cooking and Brian of A Thought for Food. The list of awesome people involved is fantastic. I sort of wish, like Gaby said in an email to all of us, that we could attend this baby shower in person so I could actually eat all the food that people are posting about! I’d even suffer through some of those baby shower games for it all.

Special thanks to GE Monogram for hosting me on this trip to Kentucky and allowing me to work on their equipment. Though they paid for my trip and accommodations, they did not compensate me for this blog posts and all opinions are my own.

By Irvin Lin
There’s a long and involved story about why this tart is named after Grayson. I won’t go into, other than to say it involves Lisa of With Style and Grace and her currently unborn, but soon to be born, baby boy. I originally made the tart crust with King Arthur Gluten Free Flour mix, but I prefer to use my own flours and make my own mix. If you have any gluten free flour mixes, feel free to substitute it in place of the flours I used. Oh and if you aren’t gluten free, feel free to use all purpose flour in place of all the flours and starches and leave out the flax meal. Or use a gluten full tart crust recipe in it’s place; might I recommend the crust I used on my pineapple galette?

By the way, the potato chips happen to add a nice crunch and saltiness to the crust. Make sure to use cheap grocery store potato chips for this crust. I tried it with nicer Kettle chips (both baked and fried crinkle cut ones) and they didn’t work. They basically made the crust taste too savory potato like. I also recommend using a white chocolate chip that has actual cocoa butter in it, like the ones from Trader Joe’s. 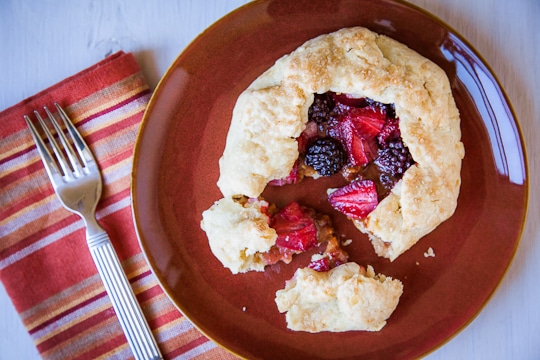 Directions
1. Preheat the oven top 350˚F. Make the crust by combining the flours, cornstarch, crushed potato chips and sugar in a large mixing bowl. Vigorously stir the dry ingredients together with a balloon whisk until evenly distributed and uniform in color. Cut the butter into 1/2 inch chunks and sprinkle over the dry ingredients. Toss the cubes of butter to coat. Flatten the cubes with your fingers until all the butter has been smashed. Start rubbing and squeezing the butter together with your fingers, until the butter is flattened and broken into smaller bits. Mix the flax meal into the cold water and sprinkle it over flour butter mixture. Add the egg yolk as well. Toss until the dough starts to form. Using your hands, fold it until all the dry ingredients are incorporated. Split the dough into four round pieces and place in the fridge to chill for 30 minutes.

2. Sprinkle the white chocolate from the filling onto an unlined baking sheet evenly. Place in the oven for 5 minutes. When you remove it, the chocolate should be toasty brown but not black or charred. Let the chips cool until the dough has chilled, but maintain the heat in the oven.

3. Once the dough has chilled, line a clean baking sheet with a silpat or a piece of parchment paper. Sprinkle your hands with gluten free flour and pat one dough ball into a round disk roughly 6 inches in diameter and about 1/2 to 1/4 inch thick. You can roll it out with a rolling pin if you want, but since I don’t have a dishwasher I went with my hands. Place the disk on the baking sheet. Take 1/4 of the roasted white chocolate and crumble it into a powder either by hand or using a mortar and pestle (again I went the hand route). Sprinkle it in the middle of the dough, leaving about 1 1/2 inches clean edge around the dough. Place 1/4 of the strawberries and blackberries in the center of the dough (about three to four strawberries and blackberries per tart). Fold up the sides of the dough all the way around the tart. Repeat with the rest of the dough and ingredients.

4. Beat the egg white and the tablespoon of water together until frothy. Brush the top and sides of the tart dough with the egg wash and sprinkle 1/2 teaspoon of turbinado sugar over the dough. Repeat with the remaining tarts. Bake in the oven for 25 to 30 minutes or until the dough is dry to the touch and starting to brown a bit. Let cool on the baking sheet, then serve immediately.4 tarts.

This blog currently has a partnership with Amazon.com in their affiliate program, which gives me a small percentage of sales if you buy a product through a link on my blog. I only recommend products (usually cookbooks, but sometimes ingredients or equipment) that I use and love, not for any compensation unless otherwise noted in the blog post. If you are uncomfortable with this, feel free to go directly to Amazon.com and search for the book or item of your choice.
709shares